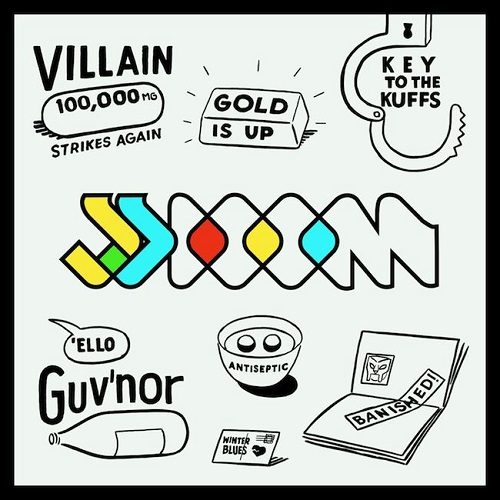 Daniel Dumile has gone through many different chapters and permutations in his 23-year career. He first appeared on 3rd Bass’s 1989 song “The Gas Face” as Zev Love X. He went on to record two records with his brother Sub Roc as KMD. After his brother died in a car accident and his label dropped him, Dumile took a few years off to recover and plot his next move. He re-emerged as the masked rapper MF DOOM, and had a highly prolific creative streak from 1999 to 2005. He released albums as MF DOOM, King Geedorah, and Viktor Vaughn, and a series of instrumental albums as Metal Fingers.

Despite being an accomplished producer, he’s made some of his best work with someone else at the boards. His 2004 collaboration with producer Madlib as Madvillain is arguably his best album, and his 2005 collaboration with producer Danger Mouse as Dangerdoom is another high point in his discography. DOOM has threatened a follow up to “Madvillainy” since 2005, as well as a project with Ghostface Killah. However, both of these albums have fallen victim to DOOM’s sporadic productivity in the last seven years. He’s only managed to release one proper album of new material in seven years, 2009’s “Born Like This.” The rest of his recent discography has been padded out by compilations of his guest verses, albums with other rappers recycling his “Special Herbs” beats, and two live albums. The latter is especially ironic given how sketchy DOOM’s live performances have become. Like a hip-hop Axl Rose, DOOM tends to go on late and play for a half hour, and that’s if the crowd is lucky enough for it to be DOOM behind the mask and not an impostor lip-synching.

While the Madvillain sequel promised by the end of 2012 is nowhere in sight and the Ghostface album is also M.I.A., DOOM did manage to release a collaboration with Jneiro Jarel this year as JJ DOOM. The question DOOM fans are asking themselves is if “Keys to the Kuffs” is a collabo on the level of Madvillain or Danger Doom, or if DOOM is still lost in the woods.

“Keys to the Kuffs” contains some of DOOM’s hallmarks: clips from cartoons, convoluted rhyme schemes, and a sense of humor that only slightly covers up DOOM’s bitterness at the world. The cartoon imagery of his earlier albums is mostly gone, although he still refers to his villain persona. His bars are equal parts intricate and goofy, and you can tell that there is a deep dude underneath the comic book exterior. On “Guv’nor,” he raps:

“Vocals spill over like the rolling hills of Dover
Or the Gulf Oil Disaster if preferred you’re after
Depends on your status or your stature
Whether you benefit from the prior or the latter-er
Get the fatter check split
How much for 100,000 tons of Corexit
Sell a Chinese half-priced seafood
Price is like a real nice street dude
Who can knock the most dead birds out the sky
And then spread a lie
And then say he know why, bet
Get the machine, blame it on the fireworks
Clean-up, y’all know when to send the wire, jerks!”

While the old DOOM magic is still there, he’s not exactly giving his A game on “Keys to the Kuffs.” At times he slurs so much it’s hard to understand what he is saying, and he’s off-beat on “Banished.” The album was recorded between December 2010 and April 2012 without a lot of face time between rapper and producer. As a result the chemistry between DOOM and Jarel and the overall cohesiveness of the album are both lacking. This is the biggest issue with the album: Jarel has good beats, and DOOM is DOOM, but somehow the two together never fully mesh.

“Keys to the Kuffs” has moments where DOOM’s verses and Jarel’s beats gel.

“GMO” combines a stuttering beat with DOOM’s rap about genetically modified foods, complete with Beth Gibbons of Portishead on the hook:

“Question: Will the frankenfoods kill us?
Or turn us into thangs off Thriller, or dang gorillas?
Breeds of a needless variety
In the name of greed we in a seedless society
Flounder genes in your tomatoes
Cod in your potatoes, playin’ God, retarded’er than Plato
And as the juice gets sweeter
No use in bein’ cute if you’s a useless eater
Make it hard to keep your mattress clean
That was mean, little froggies with sex changes from atrazine
And aspartame in gum, Splenda is plenty fun
Left many strung, agenda 21
Or have your third eye cry or your side blown
Or ride on, forgot to sign the guide stone
Yours truly all caps DOOM
Sue him if you’re gloomy, or boom to your tomb”

“Winter Blues” is another strong track. DOOM gives his version of a love song:

It says something that my favorite song on the album was “Viberian Sun Part II,” a mellow instrumental that is the second-to-last track. It also says something that despite the fact that this album was released last spring, and despite the numerous DOOM fans on RapReviews staff, it took us over six months to get around to writing this review. The reason for that delay is the main problem with “Keys to the Kuffs:” it’s a decent but underwhelming album, and one that inspires apathy more than adoration or disgust.