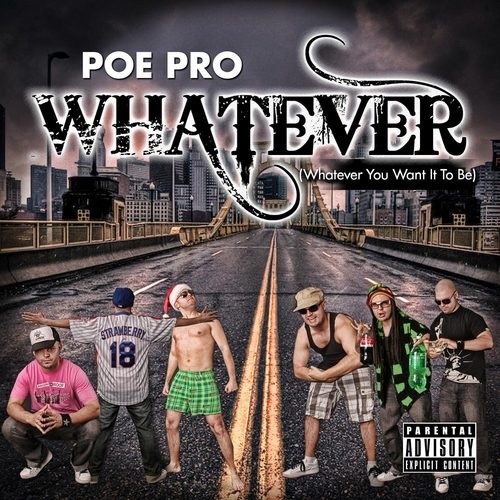 Poe Pro :: Whatever (Whatever You Want it to Be)

After we reviewed Liotta’s album last month we heard from his homeboy Poetic Prophetic and has been covered here before – Poe Pro is just the convenient shorthand he and his comrades choose to use. He explains all of this on the second track of his album “Whatever (Whatever You Want it to Be),” but in terms of explaining who he is as an artist the title track and album opener is more on point.

“Yo, my name’s Tim, I like to rock Timbs (hi Tim!)
In the whip, I rock to Rakim
You’ll never see me rock the top ten (why is that?)
of today because to me they’re not hip-hop gems (ohh)
Hip-Hop gems are joints by Common
N.W.A – straight from Compton
Mos Def and Talib Kweli’s doctrine
Nas and AZ…”

So Poe Pro is the latest in a long line of hip-hop artists who think today’s rap music is unsatisfying, but he freely admits “this album’s for me” in the chorus. Actually he says “it’s a hit, it’s a piece of shit, it’s whatever you want to make of it.” Before the end of this review, you’ll know which one we think it is, but the open-ended conclusions of the chorus are different from the typical brag rap, which already gets Poe Pro a point on the scale. His plain spoken delivery has a charm as well – he says he went from feeling like he should save rap to feeling like he should “just want to drink beer and watch baseball.” There are a lot of frustrated fans and artists alike who can relate, especially when he says “It got so shitty, that I just don’t give a fuck any more.”

Of course that’s not true, because nobody who doesn’t give a fuck any more would record an 18 song album, let alone send it out for review. He also has something most underground rappers don’t have – a Canibus appearance on “Golden Ages,” though I can’t shake the feeling this was a Canibus posse song where the original guests got deleted while Pro and his friends take their place. I’m sure that’s unfair and he got paid for these bars, but his flow seems out of place amongst this line-up, particularly Pro’s laid back delivery compared to ‘Bis’ intensity. I also can’t shake the feeling they are rapping over CastleVania music. None of the other guests on “Whatever” are as notable – mutual friends Liotta and Solo Tha Ghost are here, the rest you’ve never heard of.

As with Liotta there’s some beat recycling here, notably on “WTF? (UGHH 2011 Cypher),” and the problem is the same as before. I want to hear Camp Lo, not Poe Pro and his bros. It doesn’t seem to be as prevalent though, and Pro was able to pare his own presentation down to 73 minutes – still lengthy but it shows a little more selectiveness about what tracks to include. There’s a humor to Pro’s work that manifests itself in subtle ways, such as specifically including a skit called “?????” that he expects people to randomly hit on a shuffle playlist, and when you’ve reviewed x-thousand albums clever moments like this tend to stand out. The only problem with Pro is one I find endemic of songs like “Back in Time” and “Get High Off Music” – no matter how good (the former) or mediocre (the latter) the beats are, his flow stays just the same. I know his tongue was firmly planted in cheek when he said “I don’t give a fuck any more” in the opener, and yet you wonder… does he? His flow isn’t bad, his lines are tolerable, yet at times I think he’s rapping on antidepressants. His mood and delivery almost never change. I want to like Poe Pro more but after listening to him for long enough I just wind up saying “whatever” too.