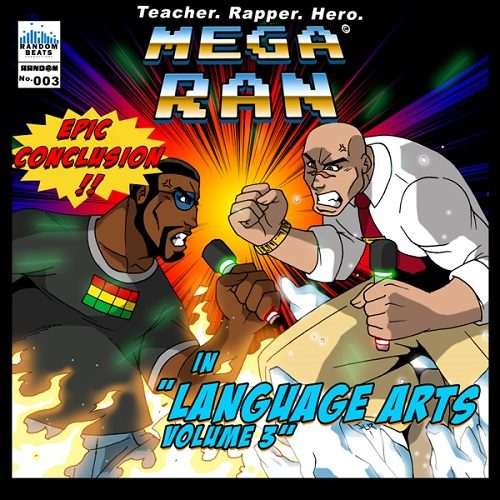 There has been a comic book sub-genre of hip hop since the 90’s with MF Doom and the Wu-Tang Clan sampling all sorts of obscure animation and martial arts films. But video games? They get the odd nod in a line (Biggie) or dedicated song (Fresh Prince) but generally seem under-represented as far as sub-genres go. Like many guys, I was raised on a diet of hip hop and video games throughout my childhood and still maintain a keen interest in both, so when I heard about “Forever Famicom” in 2010, the collaboration between K-Murdock (of Panacea) and Random (aka Mega Ran) that sampled old Nintendo games, I was intrigued. I’d heard nerd rap before, and although it was solid lyrically, the problem was that it sounded like nerds rapping. “Forever Famicom” was a superb piece of hip hop with songs that any gamer could relate to. The “Language Arts” releases however, I have had little experience of and was glad to see Random is still producing creative music in a professional manner some of his earlier work lacked. The 2012 Random has a tighter delivery and a more listenable flow. Where some of his production was “too gamey” in it’s overabundance of MIDI samples, he now raps over beats with subtle game samples.

Random bridges the gap between the masculine “cool” of hip hop and geekiness of video games by just being himself. I’ve always felt there was an honest, unspectacular aspect to Random’s raps that just absorb the listener, especially when talking about video games as a habit akin to how rappers usually describe their weed addiction.

Some of the songs on “Volume 3” reference previous volumes’ work, particularly “A Routine Trip to Game Depot”. Showcasing Random’s knack for storytelling, he makes the mundane activity of going to the game store to buy a game a humorous stab at the game industry’s reliance on violent games aimed at children, whereby entering a date of birth over 18 locks the player out of the game (therefore stopping adults from playing). It’s an interesting opinion that I share, as a guy raised on Super Mario and Sonic The Hedgehog, children are now raised on Call of Duty and Grand Theft Auto.

“Destiny” features Roknowledge, eerily similar in sound to John Cena, reeling off his thoughts of inspiration but ultimately becomes a forgettable excuse for an intro. “How Bad Do U Want It?” is where the record kicks into first gear, and Random demonstrates how far he has advanced on the microphone in two years:

“Cats schemin’ I can tell at how they look at me
I’m in ‘The Situation’ so they tryna ‘Snooki’ me
I’m twelve years in, far from a rookie B’
Most fabulous, words in my notes have it as
fatal like the latter stages of a coke habit is
and they adamant to push you down the ladder
then you nameless like the GTA3 protagonist
these guys are quick to talk, but mad slow to act
like a car stuck in drive I ain’t goin’ back
so don’t take it as a sleight to my home-state
because when I’m there you ain’t gotta ask my goin’ rate
but when I’m OT the sky is the limit
whilst these rappers kill the game with disguises and gimmicks…”

Regardless of Random’s background in gaming, it is refreshing to hear him sound so passionate about his music. To understand just how much work he puts out whilst balancing his job as a teacher is something I can’t comprehend, being married to a teacher myself. Although Random does hint at “converting his hobby to a job” on “The Regimen” a track where he compares his mic skills to that of a ring-fighter. The infectious string sample keeps things ticking over whilst the unknown Wax tells Ran to get in shape.

Random’s storytelling prowess is evident again on “Maya’s Song”, an absorbing tale of a girl who is the victim of a troubled childhood, yet finds happiness in becoming a teenage mother. The beautiful piano loop reminds me of Mr J Medeiros’ classic “Constance”, a similarly powerful tale of child abuse. Hearing “Ready 2 Rumble” straight after is a strange decision on Random’s part though, a standard brag-rap song accompanied by hard drums and sharp stabs. “Test-taking Tips” sees Random provide advice for anyone taking exams, and being a teacher it’s encouraging to hear him offer tips to relieve stress from excessive concentration. Most rappers wouldn’t touch the topic of exams. And that’s where Random excels most; his content is full of surprises, mixing interesting stories with observations of the most mundane life occurrences.

“Language Arts Vol. 3” is a mature piece of work from a man trying to control his inner child, something any male can associate with. Whether it’s name-dropping the Dudley Boyz or The Legend of Zelda, Random possesses the talent and production to tap in to the millions of people that love hip hop or video games. If like me however, you love hip hop AND video games, “Language Arts Vol. 3” is a record you NEED to listen to.