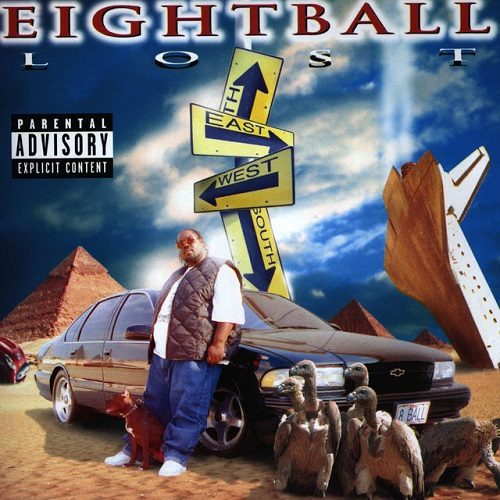 Before Jay-Z featured UGK on “Big Pimpin’,” Eightball & MJG were on Mase’s “The Player Way” in 1997. Building their career from the ground up, the Memphis duo steadily moved on to bigger things throughout the ’90s. One of these ‘bigger things’ for rappers is the solo album. In 1998 Eightball did it big quite literally with a double disc entitled “Lost.” Excessiveness was the order of the day, so it wasn’t completely inconceivable for an MC to make the – arguably immense – leap from a team player to the star of a double CD. Eightball took the lead, and Tha Dogg Pound’s Kurupt and the Luniz’ Yukmouth would soon follow.

Premro Smith was up to the challenge, maybe not in Pac or B.I.G. fashion, but in his own unique way. With “Lost” he established himself as a rap dramatist who highlights moral dilemmas, perilous situations and karmic experiences with acute storytelling. In “My Homeboy’s Girlfriend” the narrator’s affair with his partner’s companion is overshadowed by genuine feelings of guilt. “Drama in My Life” demonstrates the inevitability to run into trouble if you live your life a certain way. The title track portrays a repentant soul at such a dead-end he can only turn to God to show him the way. “Time” follows three childhood friends, two destined for a life of crime, and the third, the rapper, being their potential victim just the same once he makes good.

Eightball is keen to give his stories a dramatic, even epic touch, elevating the events in an almost Hollywood manner, making it feel like you walked into a Scorsese or De Palma movie. Not every rapper with a story to tell can develop it over three verses, but Ball does it with a sense for timing and detail that betrays the experienced rhyme writer. On “All 4 Nuthin'” we check in on the protagonist at three stages in his short life, his death, with which the song ends, rendering all his endeavors futile. You see it coming, the young knucklehead doesn’t:

“6:30 in the mornin’ my mama wakin’ me up
Tellin’ me to get ready for school or she gon’ kick my butt
Iron my jeans till they creased, put on Nikes and a fleece
She thinks I’m goin’ to school, but I’m headed for them streets
Before 12 a.m. I done did more shit than a Marine
Fall up in the school house, high off them greens
Hoes bobbin’ – Who that young nigga with the figaro?
They call him big Ball, but his real name is Premro
Fourth period, American history ain’t too interestin’
My beeper blowin’ up, my homies havin’ a smoke session
30 minutes later I’m standin’ on the avenue
Doug pulled up the Cut’ thang, askin’ me what I wanna do
Jumped in the ride; fuck this shit, I ain’t hesitatin’
Trees and cheddar cheese keepin’ me from graduatin’
Hoes and clothes, big bones and vogues
Young nigga puttin’ in work, superstar of the ghetto”

Eightball usually employs a first-person perspective, making himself the lead of his narratives. It’s interesting to hear someone describe himself as close to the action whose laidback manner casts him more as an observer. But unlike the service records of many of rap’s hood soldiers, Ball’s accounts are seasoned with reflection. He introduces his dramatized alter ego as early as the “Intro,” yet already drafting the bigger picture.

But “Lost” has more to offer than well written fiction. As far as features go, the three tracks MJG appears on suggest that a timeout to pursue solo projects was definitely to be favored over another group album. “Get Money” with Busta Rhymes meets merely the lowest expectations. In contrast, “Coffee Shoppe” with Redman delivers more than the billing already promises. “Ball and Bun” unites two southern heavyweights with the boasts to match: “It’s Eightbizall makin’ niggas feel Memphis, Tenn / makin’ hip-hop funky as a chitterlin’.” “360°” strengthens the west/south connection with cameos from Rappin’ 4-Tay, Spice 1 and E-40, the latter summing the bond up with “This ain’t none of that ‘Only reason I’m doin’ a song with dude and ’em cause I want they region’.” Impossible to ignore the other later ’90s southern powerhouse next to Suave House, No Limit, and so Master P, Silkk the Shocker and Mystikal roll in for “Pure Uncut” while Ball is backed by Chicago duo Psycho Drama.

While these features are all remarkable for one reason or another, the most remarkable is “Backyard Mississippi.” The host invites Atlanta’s Goodie Mob for a cookout in best “Soul Food” tradition, down to the beat that sounds like it was hooked up in the Dungeon by Organized Noize (but isn’t). Ball lets his guests go first before giving his interpretation of the Mississippi’s metaphorical backyard:

“Southern North America, races with no love
Plantations turned to neighborhoods, slaves turned to thugs
The cats with all the drugs, children of the cotton pickers
Pimp niggas and the big thick gold diggers
Soul deliverers, prayin’ God deliver us
from evil serpents, with the purpose to get rid of us
Throwin’ out the minimum, now I want the maximum
Motherfuck askin’ ’em, we robbin’ and jackin’ ’em
Baldhead, natty dread, braided or faded
We got separated, broke the chains and migrated
Mouth full of gold, on the porch lookin’ hard
Them country niggas stay in my backyard”

It’s high time to mention the man behind the music, Tristan ‘T-Mix’ Jones (credited as Mo-Suave-A Productions, Inc.). He produces 24 tracks of considerable variety, from cinematic beats that support the storytelling to sleek compositions underpinning philosophical ponderings and tracks influenced by ’80s R&B or Suave House’s very own vision of ‘space age funk’. Any producer who cooks up a down-home jazzy track for a No Limit Soldiers feature, who can make the Goodie Mob feel right at home, who serves up a heavy chunk of funk that presents a challenge even to the Funk Doc himself, and who composes veritable big screen soundtracks like “All 4 Nuthin'” and “Drama in My Life,” has simply done an outstanding job. No slight to the album’s only other producers, Ant Banks for “360°” and Slicse T for “The Artist Pays the Price,” but musically “Lost” is T-Mix’ triumph.

“The Artist Pays the Price,” inspired by Marvin Gaye’s “Life Is For Learning,” is another example of the sheer brilliance of some of the song material as Eightball paints artists as martyrs who figuratively carry the weight of the world by sharing their experiences with an audience, offering support and advice for difficult situations. Not contenting himself with demanding respect for his role as artist, he also takes to task fellow rappers who have a less strict sense of obligation. Also on the topic of art, “My First Love” is a tender ode to music and poetry set to an airy Police interpolation, again bringing forth profound lyricism: “Let me mold you into what I dreamed you would be / Let the world see your beauty and associate it with me.” Further lyrical-philosophical essays include “Down and Out,” “I Don’t Wanna Die” and “If I Die.” While these songs contain familiar testimonies of street rap, they exude a maturity sceptics didn’t expect to find in rap, let alone southern rap. Check his reasoning in “If I Die,” triggered by the death of a close friend:

“One day my son will lose someone and reminisce
I hope it’s me – when I’m 103
Your homie gettin’ killed, that’s some bad shit to see
I hope you agree and make it better for the young ones
Cause these mamas can’t take no mo’ dead sons”

“Lost” was certified double platinum (in this case meaning 1 M sold). Those numbers speak volumes of Eightball’s standing. As the rap industry was rediscovering the appeal of watered down content, Eightball made a strong statement with a release that wasn’t created for easy consumption. Ostensibly there are more than a few instances where you think the album wouldn’t be what it is without the influence of 2Pac, The Notorious B.I.G., Nas and Scarface. Still “Lost” is unmistakably Eightball, a rapper who rarely loses sight of lyrical validity nor of his message, which is a barely concealed positive one. Ball sums up “Lost” perfectly himself – “Niggas gon’ be feelin’ what I’m revealin’ / tryina do some healin’ and at the same time make a million.”

[Note: The CD edition came with a third, 12-track bonus disc from Suave House/Universal which hasn’t been considered for this review but contains more material from the “Lost” cast, including tracks by Psycho Drama, in-house crooner Rodney Ellis, MJG, and a Ball & G collaboration with Too $hort.]