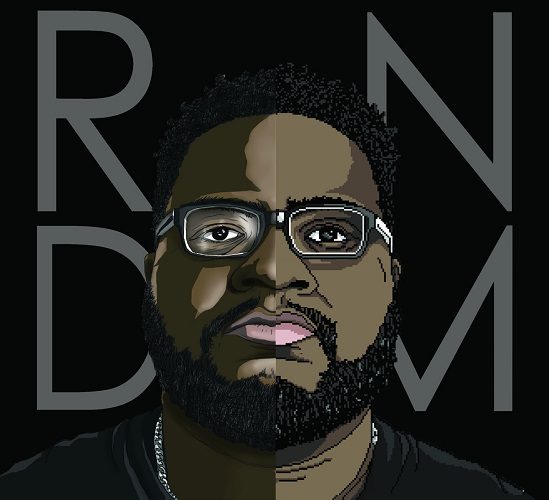 “How’s an artist supposed to pull rent?
When Spotify can’t even give ’em a full cent?
Now I point the mic at the fans, they know the songs
A beautiful feeling I fought for for so long
Now my name gets bigger on the party fliers
Which means I get to play when everybody’s tired
Another year, new steps, new promenade
Rest assured it’s honest as long as I’m involved
So here I am, still doin my thang thang
Same as it ever was – it’s just a name change”

So here we are again, doin the thang thang, reviewing another album from the man you can call Random or Mega Ran. (He’ll respond to Raheem as well, as long as it’s not “Radio Raheem.”) I’ve had to admit I’m a little biased when reviewing Ran’s albums in the past. Even if you’re not a fan of Mega Man, Ran’s unapologetic affection for things that used to be stereotyped as “nerdy” – comic books, sci-fi, video games – opened up a whole new side of hip-hop to me. He wasn’t the first to do nerdcore, but he took it from “good for a chuckle” to a serious art to me. It clicked in my head that hip-hop always HAD been a little nerdy. Rappers had been dropping pro wrestling and Marvel comic references since the earliest days, so it wasn’t really a new genre of rap at all – just an evolution of the one that already existed.

Mega Ran’s approach to “RNDM” is the same. He’s not inventing something new, he’s just evolving his music from one stage to the next – like Pikachu becoming Raichu. The essence remains the same, but what you get is a musical upgrade. The already experimental rapper Ran has branched out into collaborations and ideas you couldn’t have previously imagined. Did you think he’d do a song with Kool Keith and Wordburglar? Neither did I. Here it is though – the epically titled “Space Defense Team (Alien Swarm Part 1)” with a beat by RND1.

If you’ve just assumed Random raps about video games or over video game beats, then perhaps you need to check out Soul Veggies, but more to the point you need to re-examine what you know about Ran. That’s what songs like “Altern8 Endings” featuring Open Mike Eagle do. Over a smooth laid back instrumental from AKT AKTION, Ran imagines his life as “Dr. Jarbo,” an oral health practicioner (“dentist” to the layman) who has “Wu-Tang records on the wall, but my three degrees they dwarf it.” It’s the kind of imaginative idea that sucks you in because the best hip-hop songs tell stories. When Ran says, “It’s like a parallel existence, but I know that’s fiction… or is it?” that’s your cue to immerse yourself in the story and stop worrying about whether it’s real – because if you can see what he’s saying in your mind’s eye that’s a reality all its own.

“RNDM” isn’t just about Mega Ran performing a verbally masturbatory series of tracks though, pleasing himself with all the ideas that didn’t fit into other projects. He’s also out to please the LISTENER, and there’s no way you can’t smile when listening to a boom bap track like “Losses” with Joell Ortiz and Murs. The Alex Minor beat reminds me of 1990’s hip-hop in the best possible way – it’s rugged, the drums hit hard, and it feels deeply soulful without being pretentiousness or obsessed with how underground the line-up is – even though it IS a mile beneath anything you’ll hear on the radio.

Even the songs that feature a style and format more familiar to Random’s video game demographic still feel like they’re pushing the envelope. The Marcus Banks produced “Infinite Lives” mines a chiptune from the most unlikely of sources – the game over theme from the Game Boy version of “RoboCop.” You don’t need to know that fact to enjoy the song or the crooning of Tim White (from D&D Sluggers), but it does add a wry twist to know that Ran is rapping about living forever through music to a beat that plays when you’ve run out of extra lives. Even there the metaphor isn’t as simple as I’m making it out to be – so I’ll just let Random explain himself.

“Everybody who doubted and left my memory clouded
I decided instead of complaining I’d do somethin ’bout it
Forever’s not a time, it’s a place or a state of mind
No they never gave me mine, I elected to stay behind
There’s deeds I need done, pages I haven’t filled
Places I haven’t been to and stages I haven’t killed
There’s lives I haven’t touched and words I need to say
Tell me who needs forever when our forever’s today
If I die it’s right on time, it’s meant to be this way
Now tell me who needs forever, our forever’s today, come on”

That’s the true beauty of an album like “RNDM.” You can enjoy it on a surface level, because Ran is an outstanding rapper when it comes to the technical aspects, with the ability to craft a perfect flow for any beat and tempo you’ll enjoy listening to. The producers are the best of the best too – Lost Perception, Fresh Kils, K-Murdock and Tunesmith just to name a few. What makes “RNDM” important though is what’s beneath the surface – the fact that each time you listen to it you can glean something new from the songs. “A Poet” is not too long at 5:02 – it’s just the right length for me to go back and dig into it over and over again. He’s talking about so many different topics, but he’s also giving advice to the future generations, including his own progenitors. “Deep” seems like a trite word to describe a rapper after so many years of writing reviews, so let me put it like this – if you really want to go on an archealogical expedition “RNDM” is the album for you. You’ll be figuratively AND literally digging it for years.