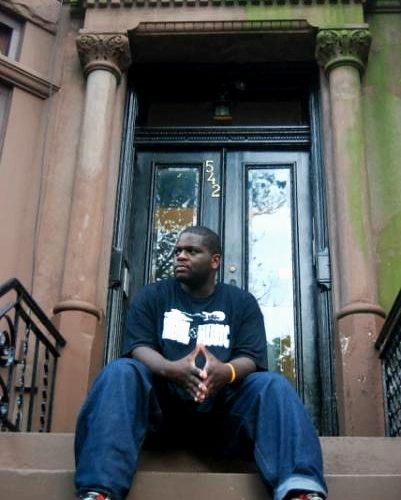 Philadelphia born emcee Random says he wasn’t raised in the toughest part of town, “but I saw plenty.” “Plenty” included a crack house that was located on his street. The spot would actually prove to be musically inspiring for Random, who explains “one of the guys that ran it always came outside with a boombox on his shoulders blasting ‘It Takes Two’ by Rob Base and DZ E-Z Rock. That became the soundtrack of my youth.” Fast-forward to 2007. It was during that year that Random, who now resides in Phoenix, AZ, and is a teacher in addition to being an emcee, released the critically acclaimed Mega Ran, an album where all the beats were composed using samples from Capcom’s Mega Man video game series. Fast-forward again to the present day, as this week RapReviews caught up with the teacher / emcee / producer to find out more about his career, how he truly embodies his name when it comes to his music, and what his students think of his skills.

Adam Bernard: What are the three most important things people need to know about Random?
Random: 1 – Random is unpredictable. Anyone who jumps on board and becomes a fan of mine because of a particular song or album that I released has to know that that’s only one side of me… one of many. I am not done experimenting yet and once you’re strapped in you have to prepare for a wild ride.

2 – Random is tireless. I feel like as long as I’m young and hungry I’ll continue to push and raise the bar for years to come. I’m not even gonna lie to myself and say that I’ll quit soon when there’s a lot more work to be done.

3 – Random is just like you. I’m no superhuman, though I play one on TV. I’m an average guy with an above average calling. As a teacher and emcee I’m constantly challenged to not only entertain but enlighten. I’m not doing anything that anyone else with the work ethic and calling wouldn’t do, but I do it because, quite frankly, no one else will. If there was enough inspiring Hip-Hop out there I’d probably be comfortable sitting down somewhere.

AB: What inspires you to range so greatly with your work?
R: I’m just a hard guy to please, that’s all. I probably have the most diverse taste in music of anyone I know. I like everything, so I like to try a lot of different things. That’s what makes me Random. I try to approach everything I do as a fan, from shows to songs to album concepts. I’d like to be able to grab a different album for each mood I’m in, so I try to create that. People ask me at shows for CDs and I pull out four and they get blown away. They usually ask “which one is the best introduction to YOU?” I answer “all of them,” because they each represent one side of me. The only one I could say that stands outside of them all, that I wouldn’t recommend you start with, is The 8th Day because of its conceptual nature. No one is one way all the time, and that’s why my albums are so different.

AB: In 2007 you released an album where every song sampled the music of Capcom’s classic Mega Man video game series. Of all the games to sample, why did you choose Mega Man? Did it just come down to how many games were in the series and the vast amount of music it provided?
R: I really don’t know. I loved video games, as we all did, in the 80’s and 90’s, and to me Mega Man’s music was always the most memorable, particularly Mega Man 2. I came across a website that had some MP3s of the songs and it instantly took me back to those long nights and blistered fingers. I got a crazy idea to make a Mega Man album sampling the tunes. Whether it sold well or not wasn’t important, it was just a way for me to flex some creative muscles that I hadn’t been using in a while. It was really fun, and wound up taking on a life of its own. Capcom got involved and it’s been full throttle ever since.

AB: By releasing that album it gave you an entirely new audience and even garnered you some time on G4. Tell me about this.
R: This was a complete shock! I never knew there was an audience for video game influenced Hip-Hop. All I wanted to do was combine my love of both into a fun project and people were very supportive. To see Mega Ran mentioned on IGN and G4, places I go to get info on games and stuff, is still amazing to me. I’ll never be able to fully grasp that. Now I’m able to play gigs in places I’ve never dreamed, like Comic-Con, and at the same time being free to be myself and make fun, creative, music is crazy. This is a surreal ride I’m on right now and I’m living each day to the fullest.

AB: Do you find yourself now trying to do things specifically for your new audience, or will your next project be another left turn?
R: Well, I’ll always be Random, so when I make the Random country album, no one should be surprised. {*laughs*} The nerdcore community has been so supportive of me and the Mega Ran project that I created a sequel, Mega Ran 9, just for them. It’s available for free at megaran.com and the full version will be on iTunes soon. The Mega Ran albums are so much fun to make that I could see myself making one of those every few years. Like you said, there are so many Mega Man games I have almost an infinite amount of inspiration at my disposal.

AB: What are you working on now?
R: The immediate next project will be a return to the roots of the underground “backpacker” emcee Random that some fans might be used to, then the next one will be another videogame romp called Forever Famicom with K-Murdock of Panacea, but after that… who knows. I literally wake up from day to day with new ideas for concept records.

AB: In addition to being an artist you’re also a teacher. Time-wise I know this can’t be easy, but creativity-wise do you feel having a full time gig to cover your real life expenses allows you do things that are a little more outside the box?
R: I never thought of it that way, but that’s a good way to put it. This has been the first year of my career that I’ve been able to make music without having to fund it by teaching, and it’s been great. Music is such an unreliable profession, though, these days especially. One week I get an awesome royalty check and then I might see peanuts for a few weeks. Teaching is rewarding, but you gotta be able to look at the big picture; when these kids grow up to be senators and doctors, then I’ll feel that it’s all worth it. Both (gigs) continue to be rewarding and fulfilling in other ways, so until they’re not I’m gonna keep doing both.

AB: Do your students know you rhyme?
R: Yes they do, I bust out an occasional song at a school dance or something. They seem to like it. When I went out of town for Scribble Jam they were excited for me. They tell me they watch my videos on YouTube and MySpace and tell their friends “that’s my teacher!” That stuff makes me smile. It makes me watch what I do a lot more, but I don’t mind. Everyone needs a hero.

AB: If they pick up your album do they get extra credit?
R: Ha! I give them the CDs on Fridays when they’re good.

AB: Finally, as a teacher you see music’s effect on kids. How does this affect your work?
R: Music is so powerful, especially these days. I had a student ask me who Jesse Jackson was because she heard his name on The Game’s record. After I explained who he was and his role in society she became enlightened, so even gangsta rap is educational. {laughs} But seriously, music is almost raising today’s youth. Parents are working double shifts and the radio, TV and internet is all they have. That makes me be a little more cautious about the images and energy I put out into the universe, but I can also use it to my advantage. I put music into as many lessons as I can. We even came up with a rap about money denominations. Next are the planets.