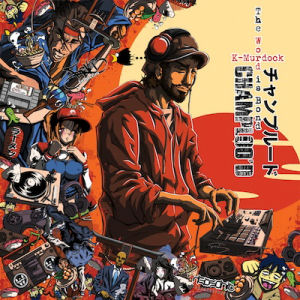 Conceived as an exclusive for theRegular RR readers are already well aware of what he’s capable of on the boards, but WIB feels there’s no such thing as too much of a good thing and we can’t help but agree with them.

There’s a lot of good news about this album, not the least of which is the fact it’s a free download, and if we’re being perfectly fair there’s just a tiny bit of bad news. I hate to nitpick or be critical, but a lot of people who ARE new to K-Murdock might be perplexed by a lack of information about the songs themselves. Neither on WIB’s site, nor on the Bandcamp site, nor in the download itself are there liner notes explaining the original source material of the remixes nor any of the emcees on them. Now in some cases that’s not a problem as the source of thinks like “Breakadawn (Quiet Storm Remix)” is fairly self-evident – De La Soul’s “Buhloone Mindstate” – but then again that album’s creeping up on 20 years old now and many of today’s digital downloaders aren’t even that old, so let’s not assume anything. It would have been better to have a full text talking about each remix – or even just a line or two on the web.

That leads to the other thing I have to say with all due fairness. K promoted this album to his e-mail blast list, and he may be assuming every one of us who visits knows all of the emcees that he works with, but for me it starts and ends with Raw Poetic and Mega Ran. A lot of the time his other projects I’m peeping are his instrumental and anime inspired joints, and in fact those are the ones he usually sends to the site for review, so I’m at a loss to identify the artists on “The Light Feet” or “Harmony,” though at least on the accent of the rapper in the latter I can suspect it’s a friend of one of the UK members of Word Is Bond. I tried like hell to Google “Razor Tongue” and figure out who the singer was – no fucking idea Jack. Now some of these tracks are largely just instrumentals so it doesn’t mater – such as “Black Swans” – but again liner notes would have been very useful here.

So in summary – free albums are always wicked cool, K-Murdock remains one of my favorite producers (and he’s a hell of a nice guy too) and Word Is Bond got an exclusive album out of the deal that got them and their website some free exposure – including with this review. That’s got to be a win all around. Unfortunately my frustration with a lack of available information probably hurts my desire to listen to multiple replays of this one when I can go back to a Panacea or a Forever Famicom project and get what I need from cats I know well without having to hunt for shit like Carmen Sandiego.