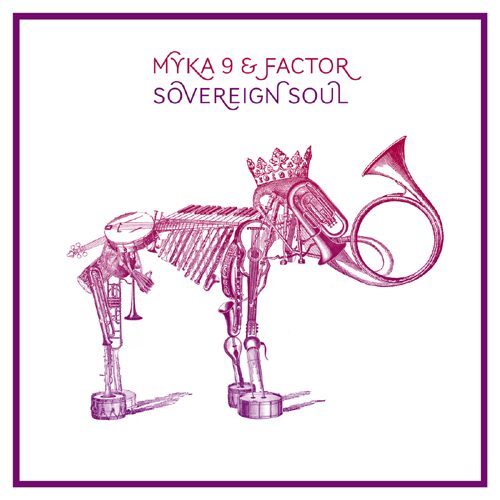 Myka 9 doesn’t just rap to the beat of his own drum. The best analogy I can give you is that Myka decided to study with a tribe of indigenous people from (insert country or territory here) who had passed down drum making techniques for generations, perhaps even centuries, and after years learning from the masteres he fashioned his own drum. He used it for a while, found himself unhappy with the results, set fire to it and started over again. Myka goes his own way to a degree that even “cult following” doesn’t adequately describe anybody who stuck with him for the last 25 years. Even the most ardent fans would have had at least one “What the FUCK is wrong with this dude?” album in their collection by now if not 2-3. He’s challenging. He’s unconventional. He’s unapologetic. He’s 9.

“Sovereign Soul” finds Myka returning to one of his most fruitful partnerships with Canadian producer Factor. There are some partnerships that just work, because no matter how unorthdox the rapper, the producer knows how to provide a sonic landscape that pulls out his best work – a good example being KutMasta Kurt and Kool Keith. When Factor throws in the LL Cool J samples on “Hard Hit” from the hip-hop classic Rock the Bells, it fits like a glove – and yet the track that immediately follows “Ode to Cosmosis” is anything other than a b-boy head nodder. He collaborates with Abstract Rude and Moka Only, two of the few artists who can claim to be as unorthodox as he is, and yet this song fits Myka 9 perfectly too. Rare is the producer like Factor who can make every unorthdox change sound just right.

Collaborations are not the exception to the rule on “Sovereign Soul,” and this is another thing that benefits Myka 9 greatly. His throwback 1980’s style rap on “Heaven Up” is tempered by the fact Johanna Phraze and JNaturaL join him on the cut. Elusive underground hip-hop favorite ERULE makes a rare appearance on “Indigeneous Areas,” which is in itself indicative of the kind of respect Myka 9 garners. “I’m Myka 9 with four more mics on this one rap” opens “5 Mikes” and he’s as good as his word – Open Mike Eagle, Mykill Miers, Mic King and Myk Mansun all join him on this massive posse cut. Even the album’s more tripped out songs benefit from guest stars, like Astronautalis and Ceschi appearing on “Bask In These Rays.”

Even as I offer Myka 9 these words of praise, for choosing the right producer to collaborate with and the right guests to work with, I’d be failing you the reader if I didn’t give you the flipside of his coin. For somebody who has engaged in the craft of emceeing for such a long time span, it’s often stunning to me how little Myka 9 cares for his own diction and how much he mushes his words together. “Bask In These Rays” makes the point better than any other song on the album, when his arguably obscure guests do a better job of ripping the mic than he does. Myka 9 makes you do work just to get to his words, and at times the effort feels so overwhelming one would rather not bother. On the other hand when he comes across clear on songs like “In So Far As We Know” he’s definitely making a case for being a legend in hip-hop, one who (allegedly) even ghostwrote songs on “N.W.A and the Posse.” Is that true? I can’t say for sure, but I can surely say that Myka 9 is better with Factor than without.