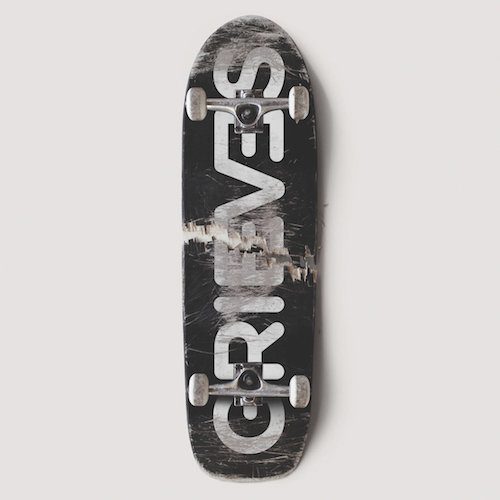 I managed to miss “Irreversible” when it came out (hey what can I say, s–t happens) so my first introduction to Grieves was when he and Budo took “Felt 3” and put their own spin on it. For a while those two names seeemd cojoined in hip-hop. People said “Budo and Grieves” in underground rap conversations the way hungry kids say “peanut butter and jelly.” They just seemed to go together and you didn’t even think of one without hearing and saying the other in your head and out loud. I was always a weird kid though – I liked peanut butter and banana sandwiches better. Still do.

Either way it became clear to me that like peanut butter Grieves tasted good on his own and his flavor was well preserved. Even if you put him on the shelf for a while and took him out a few years later the freshness still managed to last. In fact if we’re going to take the oral analogy the whole way many would argue Grieves is like a fine wine that just gets better over time. I’m always skeptical when somebody is dubbed “the next thing” on the independent rap scene, but Grieves won me over with an unpretentious self-deprecating style that injects an occasional sung musicality without relying on AutoTune. Even an average Grieves album is an inoffensive listen, and a good one is something special indeed.

Since there’s a video for it “Gutz” is as good of a place to start on “Running Wild” as any other. Grieves flew to Stockholm to record this album with Swedish producer Chords, and by his own account being sleep-deprived and jet lagged gave him what might be similar to the lack of restraint a drunk dialer has — an uncomfortable amount of emotional honesty to the person on the other end. “Gutz” is in fact all of those things rolled into one — emotional honesty, drunk dialing, unapologetic sexuality, and all over a quiet combination of synths and horns. I’m not sure how Grieves would feel if I called his song/rap “anti boom bap” but that’s the feeling it gives me and not in a bad way. There’s no thumping beat, no swaggering bravado, no male posturing. It’s just a man talking about his complicated love/hate relationship with an intoxicating on-and-off-again partner.

“You said you’d never call again
but I can hear your knuckle bones cracking on my door
I said I’d never fall again (fall again)
but here I am, looking up at you from the floor
Crazy that you got it, just the kind that I’m addicted to
It makes me feel like killing you
I think about it now and then
and I remembered what I used the drugs for, and
I think about you and say ‘f–k you’
Then you come over and I f–k you
You think about me and say ‘f–k you’
Then I come over and I f–k you”

On the other end of the spectrum is “Bonnie and Clyde,” but the down ass girl on Grieves’ team to complete the theme goes unnamed here unlike Yo-Yo. Trust me I searched the press kit, the Rhymesayers website, Bandcamp and the like to no avail. Maybe it’s because she only sings on the hook and doesn’t actually drop bars, but I still wanted to know who inspired such devotion from him. “You and I, in the wind/ my Mallory, your Mickey, the love of my life.” After swallowing that unrepentant dose of loyalty, I think I need another presecription to counteract it. Enter “Rx.”

“Don’t forget to breathe out though” as the song’s sedative effects kick in and keep “pulling me under the water.” Once again Grieves seems to have tapped a vein of emotions and poured the results into an inkwell, then put his life on parchment before going into the studio in an anemic state. “I ain’t got the answers/I’m a man that’s trying to make it on his own without a hiccup/and they don’t understand it/they just lookin at me probably thinkin I’ma f–kin slip-up.” There’s no such thing as an even keel for Grieves on these songs. He lets his emotions sweep him away with the tide, from lust to loyalty to loathing. That’s the appeal of Grieves though – he’s the Emperor with no clothes who isn’t trying to pretend he isn’t as naked as he seems.

“Running Wild” is 52 minutes and change of Grieves and Chords pulling you along through their emotional ocean. On songs like “Postcards” and “What I Dew” I get the impression he likes strong liquor a little too much (particularly Templeton Rye and Dewar’s Blended Scotch) but such vices are the luxury of a successful and/or tormented artist – funny how they often seem to go hand in hand. Cameos are either unstated as noted or kept very minimal when stated. Paris Alexa appears twice on “Boop Bop Da Willy Willy” and “No Sleep,” while the closest thing to a posse song is “Roses” featuring Davey Jones and Fierce Vill. No more is required or requested. Like the aforementioned liquors Grieves is best served straight up and unblemished. Don’t pour him over the rocks and water him down – take him straight up and enjoy the ride.