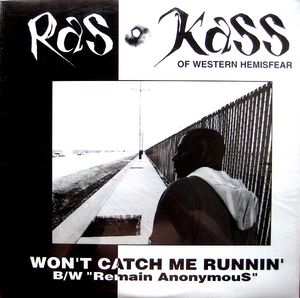 It’s not his fault, but Ras Kass’s demo tape has become the perfect gimmick, at least in some circles. Just think: a real artist is stuck with a label that fails to promote him, while his near-great debut is shelved. It’s said, here’s an artist that wasn’t forked from the bargain-basement’s earthen floor â€” “Soul on Ice” is often considered rap’s best lyrical record, but, alas, the lauds didn’t end with 1996’s canonical hour. People noticed an unreleased demo, a poorly preserved album-length that, allegedly, was even better than his official debut, at least lyrically, and certainly better than any of his new stuff. In some rumors, Ras Kass had to edit the content to “conform” to the industry’s sterile standards. I doubt it, but it certainly happens in literary publishing, in music â€” big business doesn’t care about art, and big editors care even less about decency. The result? Strip ambition to its basic, illiterate greed, talent to an infant’s fumbling curiosity, and there it is â€” the worst parts of American (and world!) culture, baked to a tasteless norm. It’s not subtle, and in some ways, it’s always been the case: most art, practically by definition, is gratuitous, stuff that people wouldn’t (or rather, shouldn’t â€” naturally, poor decisions abound) miss.

Most serious fans get this, so the hype is not inexplicable. “Soul on Ice” was just one quality album, but people wanted more. Can’t look towards his new stuff, except perhaps “Van Gogh,” and a few older singles â€” his best material was already long recorded. So, people hit the Internet, with mixed results: a few great tracks, and a lot of mediocrity fabricated into whole-cloth greatness. In short, the “Demo” is not as good as his debut, although, production-wise, it’s pretty consistent. Is this enough? Fans want Ras Kass to be more than he is, probably because, at least on “Soul on Ice,” he came quite close to being rap’s best artist, exhibiting both maturity (personal and artistic), and the endless talent he soon sacrificed for a leaky bucket of cheap and alienating fame:

“Manslaughter, off to C. Y.A.
Liftin’ weights in the yard, and playin’ spades all day
…
I’m lookin’ at myself, and seein’ every other nigga I knew â€”
It’s the evil that men do”

Great lines, but they’re also teeming with nuance â€” a rich, careful delivery, a skilled invocation of the mundane, a final, self-disgusted couplet that drives the song’s point home, and so on, punctuated by a dark piano. The demo rarely hits these heights, but I can sense potential. Consider it below. “Everything I Love” is an early version of “Anything Goes” â€” lyrically, it’s a bit weaker, and looser conceptually, but the Isley Brothers sample is quite good. “Core Audience” is an improvement â€” in fact, I consider it one of Ras Kass’s best tracks, a lost, unheard classic on the “music” business. Production-wise, it’s a faster “Mr. Me Too” (with that blunt, metallic loop) driven by scratching, and one string plucked every few seconds. It’s at times similarly understated, but occasionally picks up speed to match Ras Kass:

“Violence is the new platinum gimmick:
Call it the double-cross crossover!
A rose by any other name is “Seal”
You claimin’ you “represent the real niggas’ life”
But only represent it for a price!
Cuz if next week, the new fad was hip-hop fags
You’d find a lot of hardcore niggas in draaaaaaaaaag!
…
I know, it’s a lot of work from “ghetto”
To “gettin’ mo’ dough,” but silly ass niggas need to know:
Before it makes dollars, it must make… sense!
I kick my shit for the core audience”

As I’ve written elsewhere the wit, the humor, the wordplay (and the substance!) are all amplified by a great and subtle performance. In 1995, this was revolutionary; it’s taking “standard,” or “straightforward” rap, and hyper-developing it to the above. In short, it’s tracks like these that built Ras Kass into an artist full of conceptual variety, not simply a battle emcee with a few clever lines beating against an intellectual vacuum. He grappled with artistic questions, and, for a time, could consciously spot (and perhaps articulate) the difference between talent and muck, especially in his own work. But, ironically:

“So that’s why I remain anonymous
Symbolic of cuttin’ out the middle man
And keepin’ mine autonomous!
I’d rather be major on a Minor
Than minor on a Major label!
I’m willing and able to put your label
On my choppin’ table!
Recycle black dollars, and not go pop
And if I flop â€” at least I stayed true to hip-hop!
he opted for the Major, with notorious results”

“High I.Q.” continues the fine production: a rough, clangy piano, and a well-placed introductory sample (warped, by the way) from some old show. As far as that goes, it fits the short but intense delivery; Ras Kass knows how to exploit the grittier tracks quite well. It’s one of his best-known early songs, but I’ve come to distrust that as an indicator of quality. Here, the distrust is sort of warranted, if not on the headphones, then at least in print:

A few lines aside, it doesn’t get much better. I suspect the concept could have worked, but Ras Kass just doesn’t execute it well enough â€” there’s little that’s memorable here. In short, I expect wit, not a meaningless barrage of fluff. As a follow-up to “Core Audience,” it’s disappointingly instructive: certain things just can’t work, and manifestly so. And Ras Kass shouldn’t have been the rapper to demonstrate this. “Won’t Catch Me Runnin,'” as if not to break the catalogue of trade-offs, was eventually re-released with an inferior beat, and a superb final verse. Here, Ras Kass brags about stealing shoes and compares himself to a diaphragm (the artificial one occasionally found a bit below the thoracic muscle) â€” a bit silly and at times barbaric to the untrained ear, but what can you expect? It ain’t for the profane:

“I will be stylin’ when Cali is an island
It’s my fault â€” my shake from Brooklyn to Vegas
The earthquakes on lyrics, ya plates like San Andreas
Would be rumblin’! You’re not ready for my fly type of genre â€”
I’ll rock your world like Ugly Wanda”

“Capital RAS” is another highlight, but strangely so â€” it’s perhaps his best laid-back track, although lines like “Before I take it to your fuckin’ face like Clearasil” tend to diminish the quiet. Still, consider the set-up: a slightly comical keyboard, a drum, and some wind of sorts, whipping well against Ras Kass’s conceptual stuff. Carson, California â€” I thought genes had nothing to do with racial behavior, but Ras Kass, the activist that he is, makes a few socially-astute observations about his home town:

“See, you can take a nigga out the ghetto
But you can’t take the ghetto out a nigga â€”
‘Cause even upper-middle class niggas tend to act an ass
Smoking blunts at the station, open ashes ignite gas…”

But, jokes about his “socially-astute observations” aside, he is full of these memorable, ambiguous lines. Sure, call it “political” if you’d like â€” just don’t get it confused with a dead prez bland-fest. As a “political” rapper, Ras Kass knows how to be fun, witty, and obnoxiously noncommittal. And call “Remain Anonymous” kind of jokesy, too, at least on the production. It’s another “funny” keyboard, but here, it just doesn’t work. I’ve heard, read, etc., the lyrics, but, as a song, it’s a chore â€” unfortunate, too, since it doesn’t need a touch (or even a hint!) of greatness to improve, just something appropriate for the flow. Ras Kass can’t even stay on-beat, probably because it doesn’t have a real direction, and little to justify his admittedly great delivery.

The Ras Kass “Demo” isn’t ideal, but it’s worth taking a look at, if only for a few great songs, especially “Core Audience,” one of the best things ever done in hip-hop. The rest is somewhere between “average” and “very good,” but, alas, never approaching the supernal official debut, nor the handful of singles Ras Kass released shortly before the Fall.