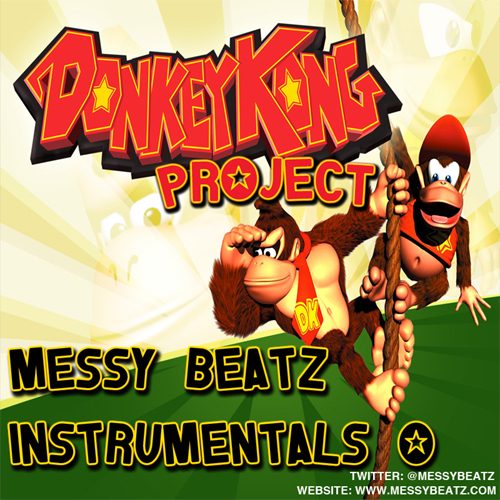 I’m a sucker for Donkey Kong Country – always have been. When it first came out for Super Nintendo, the look was light years ahead of any other platforming game available. Rare invested heavily in cutting edge 3D graphics rendering technology, but just as impressive was how they were able to pack that 3D imagery onto a SNES size cartridge. Nintendo stuck with the cartridge format for years, a move which may have ultimately cost them market share against the Sony PlayStation, but which endeared me to them as a gamer. Carts are durable and reliable, even with their size and storage limitations, and it took an epic game like Final Fantasy VII to finally lure me over to the “dark side” of disc based console gaming.

I digress. You’re not reading about Messy Beatz to hear me wax poetic about the bygone days of Super Nintendo and Nintendo 64, and for that I apologize. Then again when you’re writing six reviews in a day, it helps to have something to wax poetic about. Messy Beatz uninentionally released a free “beat tape” right up my alley as a gamer. In his press release M.B. refers to Donkey Kong Country’s “experimental almost ambience like beats” and he’s not kidding. It wasn’t just the cutting edge graphics rendering which made the game so addictive back in 1994 – it was the music by Robin Beanland, Eveline Fischer and David Wise which gave each level more than the average amount of atmosphere. Everybody can hum the Super Mario Bros. music, but part of the reason it’s so identifiable is that it got recycled for so many levels – just like the “underground” SMB music and the “water” music.

DKC used a wide range of atmospheric music to create different moods, even for the bonus levels, and though they may have repeated in places (such as the mine cart levels, and the swimming worlds) these were not simple chiptunes – they were fully orchestrated worlds. Messy Beatz only takes the time to remix and reimagine five of them, when there are over two dozen different individual songs in DKC. Among my favorites is “Aquatic Ambiance,” which M.B. has added his own hip-hop take to on “Confused.” There’s a downside to this though – as much as I’d like to praise Messy Beatz for his efforts he’s adding on to something that was essentially dope to begin with. The tempo’s a little different, the pitch is a little different, the beat is a little harder. I’m used to hip-hop video game remixes that add on with lyrics or chop up old game beats into totally new forms. I can’t say “Confused” does that.

It’s a little odd to knock something I enjoyed, and I definitely enjoyed “Donkey Kong Project,” but Messy Beatz essentially took something I enjoy and repackaged it without the video game part – adding a few drops of his name echoing over the top. There’s nothing bad about it, but I also don’t feel this showcases what a good producer is truly capable of, and I feel there’s more to Messy Beatz than Donkey Kong beats. With the “beat tape” becoming ubiquitous these days, it’s up to the producers creating them to really show off next level techniques – and these are good to if one is being generous slightly above average – not next level. It’s still fun to listen to regardless.