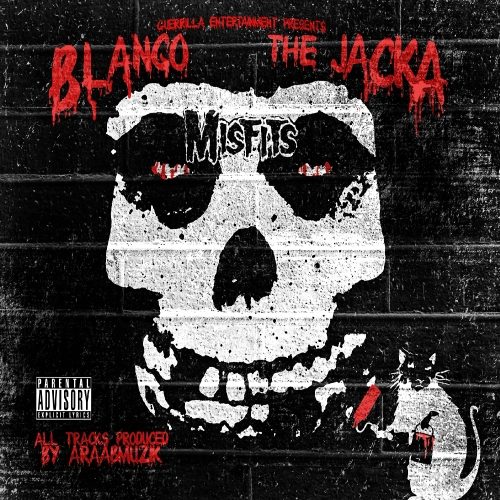 “Misfits” is the second volume in Blanco & The Jacka’s EP trilogy and another amalgamation of various visual ingredients into a vaguely ‘conceptual’ release. Title, logo and skull and skeleton are borrowed from ’80s New Jersey punk band the Misfits, the patriarchs of horror punk. Also making an appearance is the quite likely most famous contemporary street artist, Banksy, whose artistically minded rat is depicted twice, along with his Bazooka-wielding Mona Lisa (CD edition). Then there’s again something funny with the song titles going on, but unlike in the case of “Obey” this reviewer has no idea what inspired them. Suffice to say that Blanco and Jacka haven’t suddenly gone emo despite songs like “Narcissist” and “Bipolar.”

This time around the position behind the boards is taken by araabMUZIK, famous for MPC-manhandling, DipSet production and an ear-catching instrumental album called “Electronic Dream.” With the public being left in the dark about what exactly the deal is with this project, someone online claimed that araab ‘produces the whole EP off samples from one rock album.’ Personally I doubt that’s the case considering the music is relatively diverse. The joyous, reverberating grooves in “Pretentious” perfectly mesh with Pressure Bust Pipes’ ragga chanting. There’s an Asian vibe to “Narcissist,” “Optimistic” is rhythm and blues in slow motion with its gradually developping pianos and organs, “Pessimistic” and “Anxiety” feature somber, esoteric synths, etcetera. If these 8 tracks have one thing in common, it’s the masterful, meticulous drum programming that anchors them firmly in hip-hop.

Quality beats require rappers who are up to the task, and “Misfits” features exactly the kind of charismatic, seasoned voices who can project reason and emotion across detailed flows. A Freeway hook frames “Optimistic” while Blanco leads the pack with a surprisingly slick performance, who, as is the case so often with rap, can really only be appreciated when witnessed firsthand.

On their second EP Blanco & Tha Jacka still don’t emerge as a tag team, even though they do share certain sentiments. In that regard the guests offer welcome moments of distraction, plus they help steer individual songs towards their potential assignment. Mistah FAB contributes an existential verse to “Pessimistic” (“I’m from the land where opportunity scarce / You make it out, man, you rare / you 17 with grey hair”), Dru Down flexes his tongue of a pimp on “Pretentious,” Lee Majors, Flawless and DB Tha General ponder their fugitive status under the siren sounds of “Anxiety,” Lil Rue lights up the gloomy “Sociopath” with sparks of hope, Husalah accompanies the frontline reporting of “Fear” with a tuned hook, before Pressure Bust Pipes returns for the conciliatory closer “Bipolar.”

“Misfits” is evidently not everybody’s cup of tea. It’s hard to extract meaning from both individual verses and the overall concept. Still there’s surprisingly little discord throughout the disc. This is Bay street shit, unusually packaged and produced, but nonetheless reflective of the vibe the scene is on, a scene that is still going strong, last but not least because of its ability to adapt.