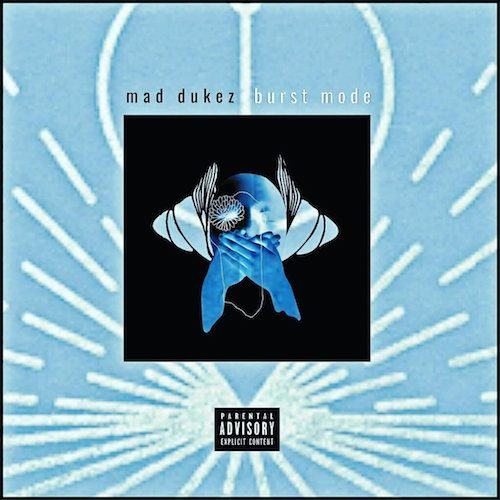 Five years ago I wrote that the only detriment to a Mad Dukez release is the short length. Even though it’s been a hot minute since we’ve covered a new Dukez album, that particular fact doesn’t seem to have changed one bit. In fact “Burst Mode” may be one of the shortest M.D. releases to date. This one clocks in at only 22 minutes and change, and I’ve spent longer in the kitchen cooking stir fry for dinner. Yeah I’m a bit of a perfectionist when it comes to what I make to eat but then again so is Dukez when it comes to what he puts on a beat. That’s why it’s no surprise that he dropped a song like the braggadocious “You Can’t F— With Me” over a Type Relevant beat. The song’s chorus states the point and sings it beautifully but the lyrics of the last verse do so far better.

“I never Uncle Tom, no coon tomfoolery
Niggaz play animal, go on be a zoo to me
You’re a faker, six feet beds and a bad eulogy
Pull a caper off with a cape I wear stupidly
Glide hiding from John Law, and my community
Tell a hooker ‘Hey I’m Dukez, start paying me!'”

Dukez manages to simultaneously put down and send up the emcees that he’s riding against on this short release. While the absence of his friend and collaborator Fresh Kils is notable to me on this CD, that’s not to say Type Relevant isn’t doing good work in his absence. “Still” proves he’s a good match for Dukez, who is a musically adventurous rapper not afraid to go left when everyone else goes right. The track sounds dark and gothic, matching the “icy veins” he talks about carrying his blood, but still manages to be a head nodder all the same.

The most “out there” song though might be “Dear Rusty.” It’s a heartfelt song with Dukez switching back and forth between singing and rapping, confessing to the aforementioned Rusty all of the things in his heart while admitting “every real dude has gotta evolve” even if you’re stuck in a world where “the media is a +Shop of Horrors+ – no +Seymour+” that you can’t escape from. The melancholy beat and echoing drum beats might throw some people off but it’s exactly this time of experimentation that turns my ears ON. More people need to take chances over weirdo tracks to see if it works and to me this one does.

If you could set a 1990’s era computer up next to your modern day laptop/smart phone with a 56K dial up modem and try downloading this album over the phone, you could probably finish listening to it in real time before the dial up connection finished getting the entire thing. I’m sorry to keep dogging Dukez about it but it’s like I’m constantly being served appetizers and never getting the main course. I might just have to burn my own “Best of Mad Dukez” album just so I have something long enough to stick in the CD player of my car, but then again that idea might be just as antiquated as the 56K modem. Perhaps I should just make a playlist, sync it to iTunes, and plug my phone in the auxillary jack. Either way a good chunk of “Burst Mode” will be on that list.