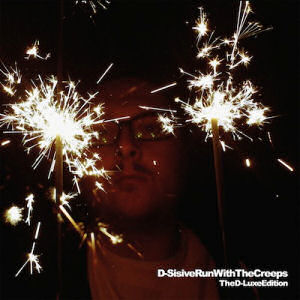 D-Sisive :: Run With The Creeps (The D-Luxe Edition)

“Writers ask me, what I think of the state of
hip-hop in Canadia – and I tell ’em, I DON’T
I’m sorry if I don’t think about rap in Stoville
I’m busy tryin to get rap to pay my phone bill” – GG Allin

In one sense I can’t really add anything about this album that DJ Complejo didn’t say on the standard edition. It was a brilliant album in 2011, and it’s still a brilliant album now. Derek Christoff’s dark and acerbic worldview may not be for everybody, but he taps into a vein that runs deep through hip-hop’s core and mines a motherlode of lyrics that speak truth. He mixes his contempt for mediocre unchallenging rap music with a biting sarcastic wit and the urge to lay himself bare on every song – holding none of his self-hatred or personal torment back. The rawness runs red like a blood stained horrorshow of ultraviolence, and yet the music becomes his cure, enabling to shoot his lyrics rockets “To the Moon” with hopeful words like “I’m alive right now.” A study in his contradictions could keep a psych ward full of doctors employed for a lifetime, but in the meantime, it creates rap lyrics you can sink teeth into:

“I’m Suge Knight in a bright red suit, lightly
chewin on a lit Cuban, no Menudo
Who you tryin to get crazy with, ese?
I’m loco, Kylie Minogue
Slow dancin in the storm in a Maestro tux
Rappers yellin out ‘White boy sucks!’
But white boy raps figure eights around
Canuck rappers tryin to imitate my sound”

What makes this “D-Luxe Edition” worth writing about is that it takes what was originally only available in D-Sisive’s closet full of leftovers and exposes them to the world, adding 24 more minutes of audio to the presentation. There may be a narrow target audience for these items – Derek fans who bought it the first time and are willing to go to the well once more – and yet those fans would be rewarded by two unreleased version of “Brian Wilson” from “The Book” that are seemingly done with a personal tape recorded in laundry room. You don’t often get the chance to see a song now regarded as a hip-hop classic in the raw unpolished developmental stages. All four “tape recorder demos” are as rough as their name suggests yet better than what most emcees with a a full studio could do.

In fairness one must also note that while the raw demos are fascinating, “The Busker” is not a raw demo, but it’s not that hot of a track. It has the sound of something cut from “Run With The Creeps” for all the right reasons – a beat that never goes anywhere and lyrics that don’t showcase Derek’s best thoughts. “Bang Boogie” is a worthwhile bonus track though, and “Funky Man (Dee Dee Ramone Hijacked),” which hints at a moment in history that both Ramones fans and hip-hop heads may both be unaware of – that punk rocker’s short-lived stint as a rapper by the pseudonym “Dee Dee King.” The trip is that Derek uses the end of the song to rap Dee Dee’s own clunky lyrics, and while that’s arguably a funny riff on the “Funky Man” song, he can’t help but do it better than Dee Dee did himself:

“I like rap, and hip-hop
I like hardcore and punk rock
I like hot dogs, franks and beans
I grew up in Forest Hills, Queens
I like to win, don’t like to fail
Don’t like to get, bills in the mail
I’m a funky guy, I got funky bones
I’m a funky guy, my name is Dee Dee Ramone”

“A Little Song For You” featuring Matt Brevner and “Don’t Turn the Lights Out” featuring Neverending White Lights both could have stood on their own merits, been released as singles, or added to a brand new D-Sisive album – they’re not the kind of material that would age and get dated quickly. In short I think the best thing I can say about “D-Luxe” is that if you didn’t buy the album already you should go for this version – and if you did a hardcore Derek Christoff fan will ultimately pony up happily to hear this bonus material.