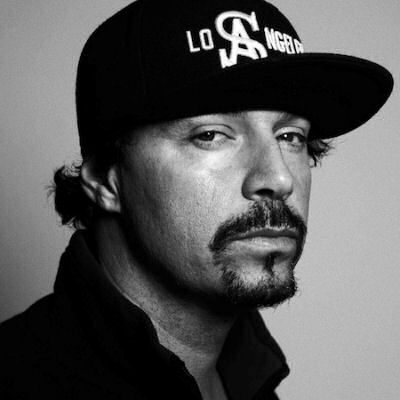 DJ Muggs has a lot going on right now. He recently released an album of bass music titled Bass For Your Face

, he’s completed a multimedia project titled Cross My Heart, and he’s working on something new for hip-hop fans. When RapReviews caught up with the Soul Assassin he filled us in on some of the reasons he enjoys working on so many different projects, why he loves the current state of hip-hop, and what he feels needs to be embraced a little more.

Adam Bernard: Earlier this year you released a bass music album titled Bass For Your Face

, and now you’re releasing a multimedia project titled Cross My Heart, which, from what I’ve heard, has heavy electronic music elements. Musically, what freedoms does this type of production afford you that hip-hop production doesn’t?

DJ Muggs: Just being able to expand, and use different sounds. Sometimes, as inventive as you want to be within the hip-hop realm, you’re still confined. If you have an underground boom bap sound, or a grimy ass sound, there’s certain elements of sound you can’t use, and I’m a sound scientist, I like to experiment with sound, and styles, and what’s really captivating me now is all these digital production techniques, things I never thought about using. It took me a while to move over to digital because it was really hard for me to be creative within a box. To look at this screen, and get creative, it took me a minute for the transition.

Muggs: Yeah, it’s a literal box. I made the transition. Now I love it. Now I don’t ever need to go back, and I’ve learned how to create my sound out of the box, the same sound as from an SP-12, or an MP. It makes me want to do hip-hop again. Right now I’m in the studio with Action Bronson and Meyhem Lauren doing an album. We’re about six songs deep. (Learning the technology) is exercising different parts of the brain, different parts of the muscle, different parts of my creativity and experimentation, it’s just making me a better overall, well rounded, artist, musician, producer.

AB: You mentioned you can use sounds, and you can use instruments that are almost not available in hip-hop when you do bass, and electronic, music. Is there a stagnancy in hip-hop right now?

Muggs: No, I think hip-hop is probably in one of the greatest places it’s been in twenty years. I think it got real stagnant when everybody was wearing a fuckin baseball hat, was fuckin rappin about dope, everybody talking about the same shit. Now it’s kinda like, with an Action Bronson, with a Danny Brown, with a Kendrick Lamar, with an Ab-Soul, with a Flatbush Zombies, I’m like man, this shit has never been so diverse and fun. When we had Slick Rick and NWA, and they both didn’t dress the same, they didn’t look the same, their music wasn’t about the same thing, but they coexisted and got along… it’s that again. Everybody’s got their own style, their own look, their own musical sound, their own lyrical sound, and they’re getting along, and they’re coexisting, and it’s all making the whole thing bigger, as opposed to when it got stagnant in the early part of the 2000s when everything was exactly the fucking same – big ass chain, baseball hat, you know the fucking uniform. I like creativity. I think every rap group, when you come out, you have to have a musical identity, you have to have a lyrical identity, and you have to have a visual identity, and if you don’t have those three things to stand out, you’re just gonna be another face in the crowd. Right now I’m seeing a lot of these kids coming up, the whole new generation, they all want their own sound, because the youth want their own fucking heroes, they don’t want your heroes, and it’s beautiful. Basically, I love where bass music is right now, I love where technology is, I embrace it, and I love where hip-hop is right now, and if there’s anybody that’s complaining about technology, then step the fuck up. Don’t be the fucking guy that was mad at the fucking car, who had the horse and buggy, mad that they invented the car.

AB: For the already established artists, is it almost like teaching old dogs new tricks

Muggs: I don’t know. I don’t put an age to it. To me, when I look at age, you have this number. I think what makes somebody old is how old your body feels. If you don’t stay healthy and active and eat good, and if you don’t read, and stay up on what’s going on, and educate yourself, and your mind stays stuck, I think you’ll age, but I think if you stay healthy, you stay young, you keep learning, you stay reading, you keep up with things, then you have a number. I think every musician, and everybody, you should constantly educate themselves. Even a doctor, you’re only as good as your reading. If you get out of medical school, and you don’t keep up on your reading, you’re going to be prescribing people twenty year old medicine. You gotta constantly read, and educate yourself to be up on things, and I think whether it’s success, or whether it gets to a certain age, people lose their drive, and they lose their ambition. I got more ambition, and more drive, than ever. I try to harness that energy and bring it with me. I’m having as much fun as I’ve ever had. Yeah, having 25 year career, you’re gonna have a few years in there where you’re just fuckin bored, but that’s part of the marathon, that’s part of the journey for me.

AB: Let’s talk about the journey. Let’s take it back to old school DJ Muggs, from when you were just starting out. Tell me your favorite story about coming up in the ranks, something that really exemplified the grind.

Muggs: Wow, our grind was a little different. I’m not comparing anybody’s grind because I don’t want to sound like a grandpa saying “kids, you don’t know what it’s like. We used to walk to school in the snow!” Be the grind was… you had to go figure it out, or find somebody who did it, because there wasn’t no YouTube, there wasn’t no tutorials, there wasn’t no distribution, you really had to figure the shit out and get out there. It wasn’t like, sit online, and build this online community, put your music online, and somebody’s gonna discover you. It was a whole different thing, man. If I was 17 years old now, this would be my thing. It’s not these kids’ fault because there’s technology, it’s fucking great. I tell the guys who are a little older, you need to embrace technology. It was just a different kind of thinking (back in the day), and a different kind of planning and plotting, and the knowledge wasn’t as accessible as it is now.

AB: With the knowledge not being as accessible, was there someone who influenced you, or guided you, that might be unexpected?

Muggs: When I got my SP-12 I had a friend named Bilal Bashir who helped me. I would call him and say “how do you do this?” He would help me along with that process, but for the most part, it was trial and error, going out and just watching. We didn’t have tutorials on how to DJ. I would listen to the radio and try to figure out how they did shit, sit there all day trying to figure out scratches. Now they got DJ schools, music producer schools, hey, it’s fuckin amazing. Back then it wasn’t (considered) an art form, but they got music schools now, they’re opening this kind of production in colleges now. This is a true art form, it isn’t some horse shit like how they used to look at it before, as a passing fad.

AB: What are you most proud of outside of music?

AB: If someone walked into your home, what about it do you think would surprise them most?

Muggs: The three pitbulls and the 45 that’s gonna be in their face.

AB: OK, let me reword that, if someone’s invited into your home, what do you think would surprise them most

Muggs: They’re probably gonna expect to walk in and be in one of the Cypress Hill videos. They probably think they’re gonna smell weed smoke. My house is a beautiful, tranquil place with a lot of books, and a lot of love, and beautiful energy. It feels like a spa when you come to my house. I try to keep it my little Shangri-La, because when I get out in the world there’s enough stress, there’s enough bullshit, there are enough problems, I gotta have the one place in the world where I can go and close the fuckin door to all that horse shit.

AB: Last time we spoke we talked about your love of racing. Will you be participating in the Gumball 3000 again this year?

Muggs: Yes, I believe I am. I’m just waiting on the final paperwork. I think it’s going to be from Copenhagen to Monaco. This will be my fifth.

AB: 50 Cent was at Daytona for the Daytona 500 and he tweeted that he was the only Black person there. Should he come through to the Gumball 3000?

Muggs: Yes, he should. He won’t be the only Black person there, that’s for sure.

AB: Finally, I need some Cypress Hill insider knowledge. What’s been the most trouble you guys have gotten into while on a tour?

Muggs: Just getting pulled over with bags of weed and guns. Stuff like that. We got locked up a few times for getting into fights, but that was when we were young and wilin out, and coming into the game super aggressive. That just comes from a lack of parenting, and a lack of having a good mentor around, and a lack of knowledge on how to act, but as we grow I think we pick those skills up.

AB: And now you’re passing them on.

Muggs: Yeah, because you realize you’re here to win a war, not fight every fuckin battle. That’s a waste of energy. You burn these little fuckin bridges and then you look back and you’re like what was the point I didn’t have to flip on that dude, I could have taken a couple breathes and we coulda made five albums together and made two million dollars together, but instead we had to flip and fight and it got none of us nowhere.