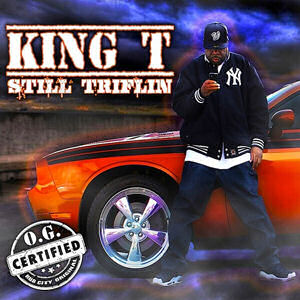 When Nas asked around, “Where Are They Now?” (his missing-hip-hop personalities list from 2006), King T promptly answered and appeared on the song’s ‘West Coast Remix’ a few months later. It was a rare vital sign from the Compton rapper, who during the decade (not counting the unshelving of “Thy Kingdom Come”) released just one project containing new material, the compilation “Boss Up.” But once a mic fiend, always a mic fiend, and so King T is back again with ruff rhymes that, for better or for worse, don’t lie about his age:

“In ’68 I headbutted the uterus
Came out bustin’, so a nigga ain’t new to this
Buttnaked, had the nurses’ head bobbin’
Rappin’ ’bout shakin’ the womb and steady mobbin’
Then a cute one, she smacked me on the ass
and said, ‘Breathe lil’ nigga, man, you rappin’ too fast’
I said, ‘I can’t help it, baby, it’s in me like my kidney’
Knew I had game when she smiled and called me silly
Burnt from jump, I couldn’t walk
so I made a pimp cane out of celery stalk
And I still walk the same, a limp, no ‘caine
At Reign with some models
waitin’ on my bottles
They say if you got it you ain’t trickin’, right?
Your bitch just dancin’, she ain’t strippin’, right?
When did gangstas start fallin’ in love?
I guess I been gone too long…”

Borrowing some Slick Rick shine and encasing it in a modern dramatic setting courtesy of Poetiq Beetz, “Tha Return” sparks memories of when Tila was simply “The Coolest” MC on the West Coast. “Still Triflin” is sprinkled with such throwback moments, whether he shouts out the late Mix Master Spade (“Do U Rememba Me”), pimp-struts with Xzibit, Silky Slim and Butch Cassidy over a Curtis Mayfield-inspired groove (“Pus-say”), hooks up with 2nd II None to a LD Beatz production that comes eerily close to their old material (“Good to Ya'”) or, joined by J-Ro, gets busy to the same loop as Grand Puba once on “Step to the Rear” (“Step 2 Da’ Left”).

The number of tracks and guests and the mixing (not turntable style, but still segueing) places “Still Triflin” a few years back in the ‘mixtape’ game. These days free projects like this are usually shorter and unmixed. Nevertheless it contains exclusive production, one track having been removed from the download because it is also included in a purchasable release by Rampage (of Flipmode Squad fame). The majority of the songs are sufficiently described via the guestlist. There’s the cross-generational gangsta track “Catch a Body” with Eastwood and BG Knocc Out, a surprisingly up-to-date affair produced by Klassic. “Do U Rememba Me” sees King T and MC Eiht tutoring fellow Comptonite Big 2Da Boy over a relaxedly thumping beat courtesy of Seige Monstracity. “Sharkz In Da Watah” is credited to 1st Generation, some sort of West Coast supergroup comprised of members of Comptons Most Wanted, The Comrads, Tha Dogg Pound and others. The ‘SuWoopMix’ adds even more personel such as Mr. Short Khop and The Relativez. “Soul Plate”‘s line-up is early ’90s (Deadly Threat, CMW’s Tha Chill), the beat a combination of the old and the new. “U’za Hoe” is a damn catchy put-down where the rappers interact nicely with Blaqthoven’s trumpet-driven beat, a definite highlight despite the relative obscurity of guests Ruff Dogg, 1 Punch and Jay Da’ Man.

Inevitably there will also be more random combinations, some to be expected (“Dogz Barkin'” with Ras Kass, Roscoe, TriState and Styliztik Jones), some not necessarily (“Champions” with Roc C and Sean Price). One interesting collaboration is the Valle Ru feature on “From Pacoima Wit’ Luv” because it establishes a connection to the King’s younger days, which were apparently not solely spent in the City of Compton. On a much more serious note, the initially romantic, Raphael Saadiq-assisted “My Angel” takes a somber turn when Tila remembers his daughter Heaven, who in 2009 tragically died in a car accident at age 16. One track later, C-Bo offers his condolences, making for some exceptionally emotional moments from artists that usually manage to hold back the tears. Words of remembrance also close “Still Triflin” as Gangsta Dresta speaks to Eazy-E, 2Pac and Mausberg in “A Letter 2 My Homeboyz.”

“Still Triflin” in some ways is the full-length equivalent of the “Where Are They Now?” remixes, likely to make many people go, “These guys still rap?!” Like other vets before him, Tila makes a noteworthy effort to prove (over often distinct West Coast production) that he still got it bad, even as the days of “Tha Triflin’ Album” are irrevocably gone:

“I been fresh since Herc and Red Alert
Since Cube did ‘Boyz N The Hood’ liftin’ his shirt
Like, what the problem is, ‘We got a problem here?’
They love me in that ‘special way’ like El DeBarge and ’em
They say King T back – I never left
Your boy ziplocked and preserved, I’m forever fresh”