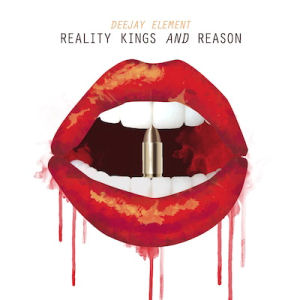 It’s no secret I’ve been a fan of the BBAS crew dating back to their Hip-Hop Shop interview and before. Among the many secrets to their success isAudible Doctor grab the limelight, Element just plays the background and does his thing – providing the vital hip-hop glue. He scratches, he produces, he drops mixtapes, he stays humble.

“Reality Kings & Reason” should continue to elevate his stature toward the recognition level of his fellow beer drinking bros. There’s no shared production on this EP – every beat is his and every scratch is his exclamation point on it. At the same time it’s not surprising that he called his homies to rap on it, which makes it a Brown Bag AllStars project in all but name and a few of the cameos. The opener “Sound Familiar” keeps it 100% family, and has the eerie sound of 1960’s psychadelic pop music plus the even more haunting “I’m the weight and the strength just to be Paul Bearer/keep it frank, I’m the future meets the b-boy era” line. Nobody involved could have known he’d die last week. Still, damn.

“Complex Individuals” mixes it up a little more crew-wise, over a lightly strummed guitar with strong snare taps. Sene and ScienZe add welcome hip-hop flavor to it, and Audible Doctor rounds things out to keep it in the family. He stays on board for the next track, which brings in South Bronx favorite Chaundon to spit on “When I Grow Up.” After a 96 second “End of the World” interlude, this EP is over far too quickly with the stellar closing song “Walk With Me,” where Gorilla Tao and J Swiss find themselves upstaged by Soul Khan’s opening nasal flow.

Available as a free download from various websites like AudioMack, DeeJay Element’s EP is a perfectly delivered 5 track slice of his skill that shows his name definitely deserves to be higher on the playbill – and quite possibly on the marquee.