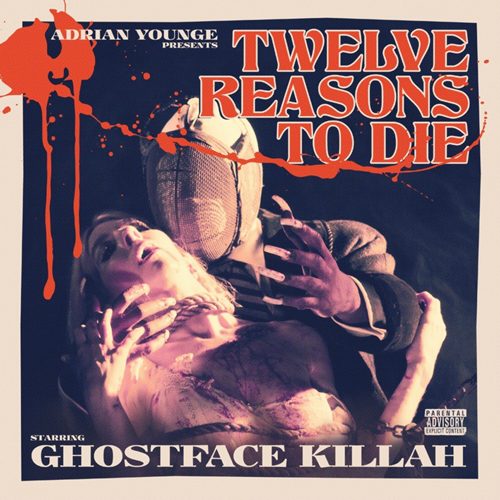 Now that most of the greatest rappers from the 90s are about 40 years old, this generation is at a major crossroads. While many rappers from this era still possess the skills to release music consistently, they must find a way to reinvent themselves enough to remain fresh, but not so much that they alienate their fan base. Around 2007, I noticed a trend among successful rappers pushing 40 â€“ they told stories. Jay-Z released the narrative-driven “American Gangster,” and found himself rapping about the same stuff he did in the mid-90s, but with a fresh, even wiser, approach. Slug, of the indie rap mainstay, Atmosphere has found himself rapping about other people’s lives rather than his own on recent releases. And The Roots’ latest LP “undun” was a concept album where Black Thought (and the album’s guest rappers) channeled the mind of a young Philly man named Redford Stevens. With Ghostface Killah’s tenth studio album “Twelve Reasons to Die,” Ghost takes on this method of extended storytelling, which helps make this record his best since 2006’s “Fishscale.”

With Ghostface’s acute attention for details and imaginative storytelling that he’s displayed over the course of his 20 year career, it’s almost surprising that he’s never tried a full-blown concept album before. He has played a major role in Raekwon’s “Only Built 4 Cuban Linx” and its sequel, both of which feature a loose narrative, but “Twelve Reasons” features a well-plotted and extremely focused storyline that serves as both a strength and weakness for this record. The story is based in 1960s Italy, and without giving too much away, it tells the story of love, betrayal and revenge. Ghost sticks to the narrative outlined by producer Adrian Younge and executive Bob Power, which makes the story easy to follow, but also takes away from some of the dynamism of Ghost’s lyrical prowess.

What really makes this record unique and powerful is Younge’s production. Only months after producing a great Delphonics record, he perfectly executes the sound of early RZA with live instrumentation, which is not so much cinematic as it is theatrical. The album plays like an opera with over-the-top singing, which in another setting could be extremely off putting (especially to your standard hip hop fan), but on “Twelve Reasons” sets the scene perfectly. Ghost and fellow Wu members such as U-God, Inspectah Deck and Masta Killa complement Younge’s theatrics flawlessly. Ghost sets up the story nicely on “Rise of the Black Suits”:

“Young aggressor, born into the life of crime
I would walk down the streets strapped with two nines
Bitch smacking, jacking niggas, G dub stacking figures
Police drive by, I was click clacking triggers
Jay DeLuca put me with the fam to grow
I was a boss amongst white boys rocking the flow
I had hoes, bankrolls and minks by the dozen
My rise to power was quick, they just wasn’t
Trying to make me a made man, they fucked up the game plan
I blacked out on them and started my own clan
Black Gambino, black suits, black Syndicate
My crime fam was tight, every move was intricate
The coke was brought in from by bad Colombian mules
Gorgeous women that I draped down in jewels
Streets fight started, mafia wars in Italy
Crime fam against fam and no one could do diddly”

Another lyrical standout performance is “The Center of Attraction,” where Ghost talks about falling in love with a member of the DeLuca family, and Cappadonna tries to tell him that she’s a “set up chick.”

“Twelve Reasons to Die” comes at a perfect time in Ghostface Killah’s career. After releasing solid, but increasingly forgettable albums like “Apollo Kids” and the collaborative LP “Wu Block,” he was finding himself in sort of a routine. Lyrically he is still sharp as ever (as he displayed on his show-stealing performance on Kanye and Pusha’s “New God Flow”), but this collaboration with Adrian Younge served as a perfect rut-buster to pull him out of that stagnant state. While most of these songs probably can’t stand out alone, the project on the whole is a great addition to an already great catalog of one of hip hop’s finest artists.