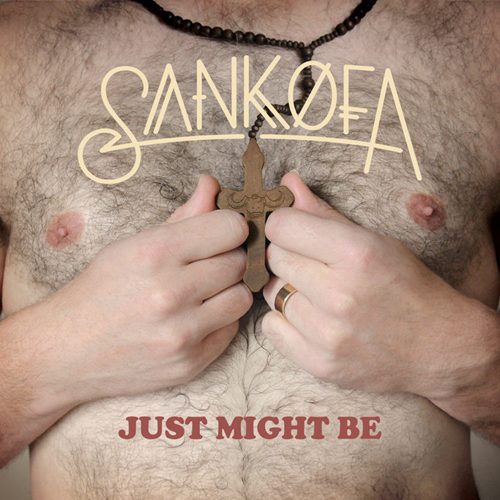 Is this the last album from Fort Wayne, Indiana rap pioneer Sankofa? In his own words it “Just Might Be.” I’ve spoken to him a bit leading up to the release and expressed my regret that he’s decided to hang up the mic, but I also respect his personal and professional reasons for entering self-imposed exile. Critical acclaim has followed most of his releases, but as most of us are aware, critical acclaim doesn’t pay the rent or buy you groceries. It’s overly simplistic to blame the abundance of free albums on commercially successful but artistically vapid rappers only make the signal to noise ratio worse.

Ultimately one can respect Sankofa’s choice to make an artistic statement with “Just Might Be” and walk away with his head held high, rather than becoming another one of those bitter backpack rappers who cries about how dope he is while nobody out there pays attention. And if you’re new to Sankofa at this point, being one of the readers who never previously experienced his iconoclastic rap stylings, “21 Choices” is the kind of reassurance you need that he’s different from all the same old same out there and worth the investment of time and money. Both the song and the video are an ode to pedaling on your own two feet, and I do mean that literally:

“No more fumbling, finding my keyfob
Plus by the time my windshield is defogged
I’d already be at work with time to spare
So complain about gas like I’m trying to care
If you’re seeking sympathy, you won’t find it in me
My bad, I’m just gliding the streets
Enjoying the air, the scenery, and the rhythm of it
Plus racing cars across the street when I am finna rush it
I got a bike from my dad, it was a ten speed
Now I’ve got 21 choices, seeing Humvees
Guzzling gas so I’m zooming past them
Backed up traffic paying dues to fashion
Forget it man, I’m moving at my own speed
Goretex Nikes so I’m never catching cold feet”

If you think he’s on some hippie shit though, “!@#! (Cursed)” shows there’s more going on that going green. Sankofa uses a funky backdrop to break down a verse about the power of the curse, both acknowledging his occasional use of profanity and expressing his love of seeking more creative alternatives to them.

“Motherfucker rolls off the tongue so nicely
Plus it’s great filler in the throes of a dry heave!
Don’t have something to say? Say that
Pose like a tough guy with a Maybach
See I treat the words like a nuclear option…
… except I use them more often”

The outro to the song is its own entertainment as well, as Mr. Bryden admits you might hear his neighbor’s dog barking in the background, then confessing he won’t re-record it (and personally I can’t hear it) while also offering listeners “guns, sex, drugs, money” if they really want a stereotypical rap song so badly. It’s that balance between thoughtful insights, self-deprecating humor and breath control that sets Sankofa apart from the average. “Chasing Ghosts” is about his obsession with sneakers, which he takes to the “honestly – I bought a shirt because it matched a pair” level. (I know there’s a lot of readers out there who can relate.) “Belligerent Beard” takes a minute or so to get going, but then Sankofa raps like his facial hair is Samson’s dreads, giving him the strength to flow faster than mere mortals. “Big Top” shows off a little swagger to his flow: “Just to clear the troublesome confusion away/if your style’s dope I’m pharmaceutical grade.” WORD. And some tracks like “Rift” are just haunting – both instrumentally and vocally:

“I tend not to speak in these ways
but these times are designed to remind me how blinded I may be
I get cold chills makin monsters out of molehills
Maybe if I’m lucky one day they’ll grow gills
Then they can help me swim through this mess
that I made by trying to avoid the stress
I mean it’s – simple enough but I’d rather let it die, yep
All the better for my mind to dissect
Keep myself company with all that is undone
I caused this guilt trip – perpetual humdrum
Put the replay up on Jumbotrons
Title it – ‘The Life of a Chump Goes On'”

Even for a self-critical emcee like Sankofa, those words make you want to reach an arm around him and say, “Hey man, it’s gonna be okay.” Really though it’s the whole of the hip-hop nation who needs a comforting hug knowing this “Just Might Be” the last time we hear from this clever, witty, fiercely independent and defiantly intelligent emcee. Hip-Hop collectively becomes a little less fresh when the dope ones like Mr. Bryden decide it’s not worth it to ply their craft any more. No matter how justifiable it is to call it quits instead of continuing to fight for art’s right to exist, the void made by his absence will be filled by one more Gucci Mane or Trinidad James. I don’t relish that prospect, but at least if Sankofa had to find a way to go out, it wasn’t out like a sucker.