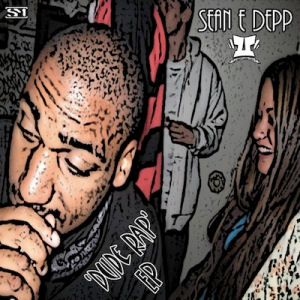 This is my first time coming across either Sean E Depp (a name clearly meant to sound like Johnny Depp) and his Understudies Crew. While a lot of what I write about for this site is sent to my by eager rappers or their evenMORE eager publicists, Depp was a completely accidental Google search discovery. The allusion to the famous actor intrigued me, and this free EP required a very minimal investment of time – a few seconds to download and only 8 minutes to listen to. I could hardly pass it up! A little poking around helped me find out Depp is a California emcee by way of Berkeley, as seen in the “Discoteque” video.

“Dude Rap” is suitable not only as a title for this short release, but as a description of Sean E as an artist. He’s the polar opposite of a hardheaded West coast G, and although he’s among the new crop of young artists emerging from the Cali scene he’s nothing like the Wolf Gang either. He’s not weird, shocking, or controversial. Depp’s concerns are very laid back – he’d like to be the dude who simply abides – dealing with his daily concerns as best he can.

“Just the medication kickin in
THC, mixed with adrenaline
Hip-Hop invaders in
Why do humans dividends, interestin’? I like nature
40 acres of peace
Sew my ‘dro, roll my treats
Don’t bother me – ’til the weekend
Then find me in the club, ghetto geekin'”

Though I appreciate the sentiment behind “Get My Name Out” and the familiar piano melody works well as a backdrop to rap over, it becomes a little TOO familiar when he gets to the chorus and it turns into Crash Test Dummies. I’m not sure you can get much props for such an obvious jack, but at least I can’t accuse him of trying to be clever and act like it’s original, and his “bird is British for bitch” line in the song makes me laugh and tempers my harsher words. I also appreciate his tribute to Rob Base in the opening bars of the EP’s title track, and once again he drops a memorable punchline with “I’m hungry – I chew fat” that makes me perk up and take notice. Sean’s laid back approach to music belies the fact he puts some thought into his bars, and if he links up with a producer that’s not just jacking top 40 hits, I think he’s onto something. I’ll abide until I hear more from this dude.