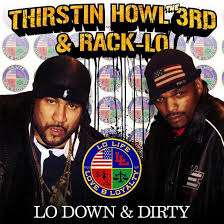 Thirstin Howl the 3rd and his Lo Life crew have always piqued my curiosity, not because of their music but because of their gang affiliations. See a long time back, The Source ran a lengthy article on the Lo Lifes, a New York gang that specialized in shop-lifting Polo clothing, among other things, from department stores. Thirstin Howl and Rack-Lo are said to be founding members of said gang. Despite an interesting story behind the emcees, I never got around to peeping any of the music released by them mostly because the indie nature of the releases threw up red flags. Flash confirmed my fears when he reviewed Thirstin Howlâ€™s “Skillophoser” in 2000, but it seemed that by 2002 Howl had gotten a more professional product in “Skilliganâ€™s Island.” Fast forward to 2007 and Howl, along with Rack-Lo, are back and have a semi-professional product for us. I call “Lo Down & Dirty” semi-professional only because the duo has taken to the seas and signed on to Australian label Class A Records. Nothing against Class A Records, but distribution-wise the label fares no better than Howl did back when he was pressing his own CDs. Sure you can order the joint online easily, but Iâ€™m much more likely to drop cash on a random CD when itâ€™s in store.

The intro does nothing as “Lo Life Founders” is just a beat with those 3 words repeated by the artists for 45 seconds. “2 L’s Up” gets things started for real as Lo and Howl drop a Lo-Life anthem over a pounding beat courtesy of Datsun. Thirstin Howl is up to his usual tricks with funny punch lines like “Brownsville, BK built my strength, Other projects claim we killed they friends.” Not to be outdone, Rack-Lo drops dope lines of his own claiming heâ€™ll “eat your food like free lunch.” Thirstin Howl and Rack Lo next address the police on “Po Po Coming” where they keep with the tradition of funny punch lines as they diss police around the world. Thereâ€™s not much to say about Howl and Rack-Lo since they keep up the same routine track after track. Whether they address shoplifting on “5 Finger Discount” or describe a caper on “Story to Tell,” you can expect the same grimy delivery and funny punch lines. Itâ€™s not a bad formula at all and remains entertaining throughout. They even flip the spanglish on “Too Hot” where they conjure up memories of The Beatnuts. Coincidentally I didnâ€™t find Howlâ€™s flow as bad as Flash did when he reviewed his albums previously. The man wonâ€™t give Ludacris competition anytime soon, but he remains true to the many gruff-voiced NY emcees over the years.

With the emcees dropping consistent flavor throughout the only wild card here is the production. Surprisingly enough, the weakest production comes from the Anger Bangers who are said to be the in house producers for the Lo-Life crew. The four beats provided by them donâ€™t do much for the album outside of “City Slicking” which is satisfying thanks to a lush blend of samples. Datsun and Sammsonite are the better producers on the album as all three songs they produce have the soulful sound reminiscent of the best New York production. The last producer featured is Stricknine and I would suspect he might be one of the reasons Class A Records has been pursuing American acts for their label. See Stricknine is signed to Class A and thereâ€™s no better way to get good production credits than paying a rapper to do an album on your label and lacing his tracks with your in house producer. Despite their efforts to put him on the map, Stricknine disappoints for the most part. “Connect” is nothing more than generic drums and forgettable instrumentation. “The Meeeah” is more of the same except this time thereâ€™s at least a bass line. Stricknine comes correct with “5 Finger Discount” where he flips a few piano notes decently, though the track lacks the energy that would elevate Howl and Lo. “Too Hot” is the best Stricknine track as he laces the track with latin horns and deep bass which fits perfectly with the spanglish style flipped on the track.

“Lo Down & Dirty” will surely satisfy long-time fans of either artist as they seem to be up to their usual tricks. The production is entertaining, though lacks the attention grabbing energy that top-notch East Coast production usually contains. I canâ€™t speak to their past work, but Thirstin Howl and Rack Lo are entertaining enough on “Lo Down & Dirty” to motivate this reviewer to keep an eye out for them in the future. As for Class A Records, while none of their in-house talent does anything to move me, if they keep dropping good albums by established acts thereâ€™s nothing to complain about.