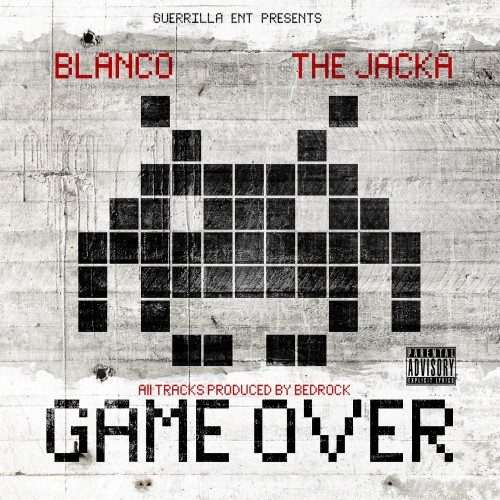 “Game Over” concludes Blanco and The Jacka’s three-piece that visually pays homage to a trio of (unrelated) street artists – Shepard Fairey, Banksy and Invader. Invader does not have the same reputation as they other two, but his consideration in the EP trilogy creates a personal connection because the French artist actually ‘invaded’ my hometown some years ago, placing a number of his small Space Invaders mosaics in our historic district, a subtle form of urban art that is not as in-your-face and damaging to facades as graffiti. The pixelated Space Invaders space ships that inspired Invader’s art also happened to be one of my earliest encounters with the gaming world many years ago, so I’d certainly be receptive to what could be assumed to be an arcade games theme behind “Game Over,” especially with all songs named after video games from that era.

As with its predecessors, however, the music on “Game Over” is, at least at first sight, independent from the artwork. The riddling references are mainly decoration to render the content more interesting. While the first installment, “Obey,” invited some interesting speculations about subliminal mind manipulation, and the second, “Misfits,” featured rap tracks with unusually honest titles like “Narcissist” or “Sociopath,” the only applicable message here is that “Game Over” signals indeed the end of the mission. Does “Donkey Kong” have a gorilla in the trunk? Does “Mega Man” have the storyline of a Mega Ran track? Does “Punch Out” pit Blanco against Jacka in a verbal sparring match? No, no, and no.

That doesn’t take away from the music itself. Blanco and Jacka once again have open house. Repeat guests like Husalah, DB Tha General, Messy Marv, Lil Rue or Lee Majors are all present, and Philly’s Freeway even makes his third appearance on as many EPs. Also arriving from afar but invited for the first time are Trae Tha Truth on “Punch Out” and Styles P and Freddie Gibbs on the definitely not misnomed “Cruising USA,” set in a part bluesy, part breezy scenery that fits the traveling theme.

On the musical side, producer Bedrock takes the reins from araabMUZIK, who handled the last EP. Bedrock shares the relative low profile of Invader, as the only obtainable information at this point is that he’s from the Bay. He displays a respectable artistic range with his beats, but considering the producer becomes crucial when he takes the sole responsibility for a release’s musical foundation, Bedrock has a hard time competing with araabMUZIK and DJ TourÃ©. The opening “Donkey Kong” is such conventional, lowest-common-denominator Bay Area fare it brings to light the nonconformity of “Obey” and “Misfits.” The other tracks are all more arresting, the stoic “Punch Out” with its dominant drums, the slowly pulsating “Rampage” with its eerie flourishes, the creeping “F-Zero” with its sparse but hypnotic synth chords. “Duck Hunt” is best described as melancholic mob music, while “Mega Man” resides on the serious side of contempo pop rap.

Still the really interesting shit already went down on the other EPs, with unusual to unique cuts like “Submit,” “This Is Your God,” “Do Not Question Authority,” “Pretentious,” “Optimistic,” or “Sociopath.” But Bedrock shouldn’t have to shoulder the blame for the relative failure alone as the rappers give even less inspired performances. If you’re a completist who got hooked by the art gimmick (like I have), get “Game Over,” if not, try the above track selection with the possible addition of “Rampage” or “Cruising USA.”