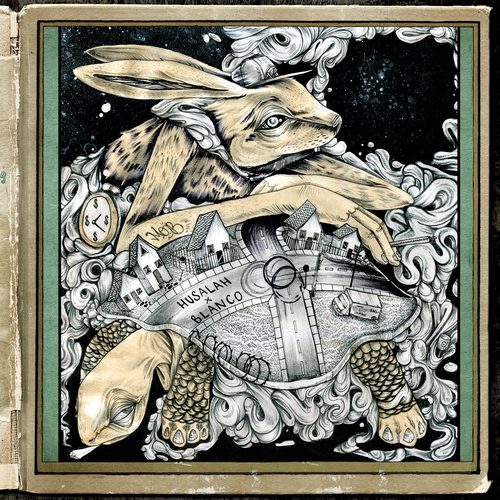 Just when you thought rap music had scavenged every possible field of inspiration, the West Coast delivers two collaborative projects whose titles evoke classic Greek fables. Earlier this year, The Grouch and Eligh released a trilogy titled “The Tortoise and the Crow,” now Husalah and Blanco arrive with “Tortoise and the Hare.” If we take both duos literally, the gangster couple of Husalah and Blanco actually comes across more literate than underground wordsmiths Grouch and Eligh because while ‘The Tortoise and the Hare’ is indeed a famous fable, G&E seem to have it mixed up with ‘The Fox and the Crow.’ Hus and Blanco’s literacy doesn’t end there as each song on their EP is named after an Aesop’s fable.

As we know by now, highbrow packaging is part of Blanco’s hustle. The content is often less classical. Once more he hooks up with a bigger name, a wise decision given his limited lyrical and vocal capabilities. But while Husalah is an insightful and passionate street talker (“If I ever gave A fuck I’d B fucked / So in order to C the G’s I move the D, then I re-up / to the alphabet”), the true stars of the show here aren’t the two headliners. Atlanta’s DJ Burn One gives a lesson in modern beatmaking, constructing stripped down yet melodically rich tracks, resulting in airy but still potent production. Opener “The Fox Without a Tail” relies on a familiar spheric sample, but the remaining tracks come across as carefully layered, original compositions.

The second track is also where Kokane gets on board. The erstwhile G-Funkateer lends his unique crooning to six out of seven tracks, and it’s regularly his performance that gives the songs their particular edge, whether is a Clintonesque performance on the trippy “Grief and His Due” or a bluesy translation of the “pusherman” theme on “The Butcher and His Customers.” He even manages to conjure up famous rock frontmen such as Jack White and Chris Martin with “The Cat and the Mice” and “The Kingdom of the Lion,” respectively. In short, although the release isn’t officially billed to him, “Tortoise and the Hare” fits snugly into the fragmentary but continuing Kokane discography, and the frequent guitar work from Nate Heller even harkens back to the days of “Addictive Hip Hop Muzick.”

Engulfed by a meditative and melancholic mood, the EP is also another addition to the Blanco/Jacka collaboration universe. Husalah’s fellow Mob Figaz alumnus guests on three songs, and “Jupiter and the Monkey” could easily have been on “Futuristic Mob,” his project with Dubble-OO from last year. “Tortoise and the Hare”‘s weak link is, not quite unexpectedly, Blanco’s cartoonish rapping. Still he can certainly take some credit for another release in a special setting, plus he’s not afraid of making fun of himself because it’s obvious who the ‘tortoise’ is supposed to be in this scenario (notwithstanding the outcome of the race). While it may not be the cleverly allegorical and highly referential effort that takes us back to a point in the classical period over 2500 years ago, the rappers at least allow themselves to be inspired by the titles of these ancient fables (“The Wolf in Sheep’s Clothing” signfies paranoia, “Grief and His Due” pain, etc.). Whether you see this as a success or a failure depends on your expectations of rap, but remember that one can never be too sure about having the last laugh.