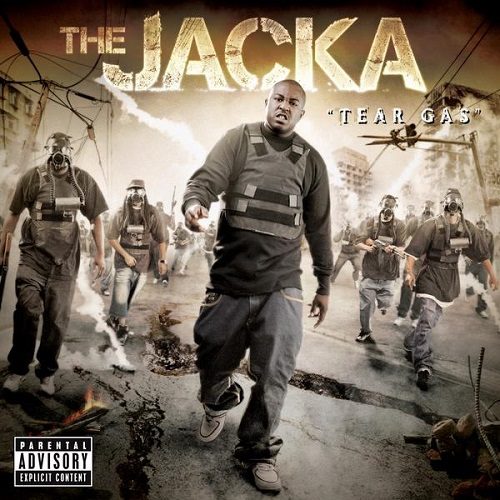 It’s been four years since Jacka’s last official album. Four years since I gave “The Jack Artist” a perfect score. In those for years I’ve only grown stronger in my conviction that “The Jack Artist” is one of the classic albums of this decade. In the years since I’ve been content in bumping the CD over and over while I waited for an official follow up. I’ve been faithfully peeping music from Jacka’s camp during those years. I won’t front, “Jack of All Trades” was a disappointment as were the Shower Posse CDs and the compilation he dropped with Lil’ Keke. Not that The Jacka hasn’t been dropping dope songs during that time, but much like a Detox leak, every dope Jacka song I heard only highlighted the fact that the album wasn’t here yet. Finally, after a lead single that didn’t gain traction and an innovative marketing campaign “Tear Gas” dropped on June 16, 2009. Was the wait worth it?

The lead single that did get The Jacka noticed is the Andre Nickatina assisted “Glamorous Lifestyle.” Traxamillion provides an upbeat cascade of pianos and synths and, to be honest, Nickatina steals the show:

“My lifestyle baby like an S-500
Gather up your friends, jump in and I’ma gun it
You give me ten minutes of my glock talk hit you
Andre Nickatina in your camera phone picture
I watch as the wheels rotate, break down an eighth
The color a snickers is the color of my face
I wear my wife beater like a banger
My lifestyle free, got one up in the chamber”

That’s the only time Jacka gets outshined on his CD as the rest of “Tear Gas” is full of the introspective word play we’ve come to expect from The Jacka. “Summer” opens things up and instead of an anthem to the hottest time of the year, Jacka chooses to flip the idea and reminisce on those who are locked up for the summer. It is through these type of tracks that Jacka shines the best and they are plentiful on this album. “They Don’t Know” finds Jacka joined by Freeway as they both reflect on the bad they do and how outsiders fail to comprehend their situation. Perhaps the highlight of Jacka’s positive raps comes on “Dream:”

“I guess I revived the scene
They finally realized who’s king
I remind them so much of who they supposed to be
The best time I ever had in my life was free
Grabbed the mic on the stage, ripped the crowd
Everybody was amazed then, look at me now
Even though I’m on I still help my niggas sprout
Pray for a change in the hood where ‘It was all a dream'”

Ampichino and Zion I deliver the goods as all of the bay’s styles are represented on the track. The funny thing is that when the next track comes out I’m ready to declare that one the best. Cellski comes through for a verse and the production on “Won’t Be Right” where once again they pay respect to the incarcerated. Though Jacka is a gangster with a conscience, he still brings it hard with the best of them. “Greatest Alive” and “Dopest For Real” allow him to reflect on his status as a bay area boss, with E-40 providing a dope verse on “Greatest Alive.” Though initially the feature list looked too heavy on “Tear Gas,” it seems Jacka brings out the best out of all his guests. You have Krondon lending his menacing voice to the hook of “Scared Money.” Phil Da Agony lends some hip-hop cred to the radio-ready “What’s Your Zodiac.” Planet Asia comes especially hungry on “The Movement,” a hip-hop anthem that would be at home on any playlist. Cormega and Jacka reunite on “The Storm” where both drop knowledge over a dope, dreary sample. The only guest spot that didn’t quite work out was Devin The Dude on “Keep Callin.” Devin is on point, the jazzy beat is dope, and Jacka’s first verse is on point â€“ the problem comes during Jacka’s last verse where he loses focus. While I usually commend Jacka for blending his street and political raps on every track, sometimes a track about the ladies needs to stay that way.

Though “Tear Gas” isn’t anywhere near as bleak or apocalyptic as the album art and marketing campaign would lead one to believe, it is still a very dope album and strong follow up to a classic. To be clear, Jacka still has plenty of songs on here that address the serious and real life aspects of the world, but this time around he’s balanced it out with songs representing the brighter side of life. One can’t really blame him, his solo work and albums with the Mob Figaz has made him as famous as any rapper from the Bay area and it is only natural for him to want to celebrate his success. Thankfully, The Jacka can make a dope commercial song so the 2 blatant radio songs on the album don’t bring it down. The rest of the album reflects The Jacka’s growth as an artist quite well. The Jack still got it! Not that Jacka himself ever doubted that, but I’m sure he was anxious to prove that “The Jack Artist” wasn’t one of those once in a lifetime moments. “Tear Gas” proves that The Jacka is here to stay. He can pick a dope beat, lay down a catchy hook, and keep the listener entertained for a whole album. Taking it a step further, Jacka manages to connect with the listener in ways most rappers can’t. Those waiting for a final word need to wait no further, “Tear Gas” is dope. It was worth the wait.