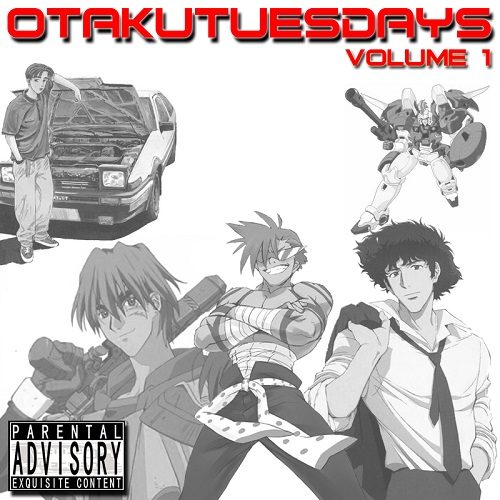 Hip-Hop has gradually become more inclusive over the years, not without controversy at times, but the once hallowed halls of b-boys have found room for the gamers and the nerds. The turning point in many ways can be attributed to the rise of the Wu-Tang Clan, whose passion for badly dubbed Shaw Brothers martial arts films was (if we’re also being honest) a bit nerdy in its own right. In the course of their ascent we learned that these pillars of East coast hip-hop were also fans of comic books, video games and professional wrestling. In their wake Zev Love X was reborn as MF DOOM, pushing the envelope of hip-hop’s big bearhug around comics and animation even further, and now in 2013 we’ve reached a point where even Japanese manga and TV shows are in the rap mix. The stereotype that only fat white nerds who live in their mother’s basement enjoy gaming and comics has now been shattered, and in the process a new generation of rappers has risen who doesn’t need to be “hard” to create dope shit.

I’ve oversimplified a bit in the opening paragraph for the purposes of setting up this review – actually more than a bit. If one so desired an entire book the size of Ego Trip’s Book of Rap Lists

could be devoted to every hip-hop artist from 1978 to 2013 who gradually pushed open the door a little bit more with a casual reference to something considered “nerdy” as a punchline or to pop one or two friends who would get it while listening. Since the general reaction to writing that book in this review would be #TLDR let’s accept the argument that Ghostface Killah and the Metal Face Villain made it cool to be a dork. Richie Branson’s “Otaku Tuesdays” is the natural extension of that love of comics and animation, taking it to the next step with songs like “Bring Back Toonami.” Now obviously his campaign worked given that Toonami DID come back as a Saturday night time block, but let’s take a look at what Branson had to say about his favorite purveyor of anime.

“In a room full of Mobile Suit posters on the wall
Even had a few anime action figures standin tall
on my dresser – and no pressure – but I know
you got my #BringToonamiBack Twitter message
I still remember my time spent after school lessons
I was watching Gundam Wing, jammin ‘White Reflection’
Yeah – yo I hope you really hear me
Bring back Toonami for real, not April Fool’s yearly
‘Til then I’ma kick flows
about how I miss shows like Batman: The Animated Series
And you can make a new season of The Big O
I know Toonami has an option for some episodes
And if I get big, I swear I’ll rock a show for free
if you bring back Yu Yu Hakusho to TV
And bring back Full Metal Alchemist”

“Otaku Tuesdays” is a love letter to that entire programming block, at least in the version that aired from 1997-2008, starting off with the cult favorite Cowboy Bebop – even sampling “The Real Folk Blues” from it on “Space Cowboy Serenade” and referencing other famed themes from the show with lines like “I’m listening to +Jazz+ from +Jupiter+ through the speakers.” There’s a good and a bad side to this endeavor – there’s a good chance you’re either going to get it or it’s going to go completely over your head. Even though that seems like a negative criticism at first, it actually geeks me out as a reviewer, since I’ve watched enough anime myself over the years to pick up the references. Knowing “Tofu Delivery” would be about Initial D made it that much better when the song comes out and Richie delivers on my expectations (pun intended). Although I’ve never been big on Gundam shows, “Merquise Dreams” was obviously inspired by Zechs Merquise from the title alone, and “Leyline Rhymes” doesn’t disappoint Outlaw Star fans.

“See ever since we met Hot Ice Hilda
We’ve been on the run from these pirate killers
We never really know quite what to expect
As we jet from one end of the galaxy to the next
I must say it’s a fat chance
If you’re up against me Jim, Suzuka and Aisha Clanclan
And Melfina providin that navigation
as we anticipate the treasures that await us”

Richie Branson is among the new generation of rappers who take pride in the things that in my generation got you picked on at school or laughed at in college. Perhaps in some circles they still do today, although the millions of dollars that “Cowboy Bebop: The Movie” made in theaters was one among many signs that “otaku” culture was going as mainstream as Cartoon Network’s own Toonami block, and Richie Branson’s raps about those shows are riding that wave. Even the word otaku itself, which was formerly a derisive for anime fans, has now been turned on its ear and adopted as a celebration of loving the music, games, novels and shows spawned from Japan and imitated in the U.S. If Richie Branson made every Tuesday an “Otaku Tuesday” I’d tune in for each weekly installment.