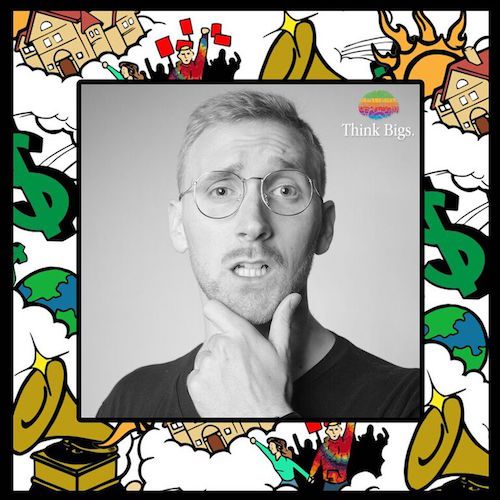 Andrew Bigs benefits from the coincidence that his publicist promoted to me that the San Jose based rapper would be performing at SXSW this year. Now I say coincidence because (1.) I’ve never been to SXSW and at this point in my life I might not appreciate it like I would have in my 20’s and (2.) This year’s event was scheduled to run from March 11th through the 20th. By the time you’re reading this review there’s absolutely no chance of you catching Andrew Bigs’ set, although I suspect if you went that probably wasn’t first or foremost on your mind anyway. If I had to hazard a guess it’s probably Anderson .Paak and Boogie who drew the biggest crowds as far as hip-hop fans go. That’s reason (3.) that this is all a coincidence – so much of what goes on at SXSW has little to nothing to do with hip-hop music or culture anyway. It’s hard to find a “fest” that does – it’s not like Bonnaroo has more than a token rap act or two either.

Would Andrew Bigs have been well showcased at SXSW as a result? Well that depends entirely on your goals. It’s often viewed as the place where record label A&R types go to scout talent, though that has nothing to do with Boogie or .Paak since they’re both signed. I’m not sure what label Bigs is with though and nowhere in his press kit is it mentioned, and when I web search Andrew Bigs it just leads me full circle back to his own website. Until I’m informed otherwise I’m going to assume he’s self-distributed, and since I can’t find liner notes in his press kit, it’s quite possible that he’s self-produced too. What I can tell you is that he’s referred to as “very active” in the San Jose community which I can neither confirm nor deny, and that he is “working with Silicon Valley De-Bug, an organization that coordinates social justice campaigns to advance the rights of youth, workers, immigrants and those impacted by the criminal justice system.” All noble pursuits if accurately stated, which makes Bigs a worthwhile person regardless of his hip-hop pursuits, and I’ll give Mr. Bigs a big FB-esque “THUMBS UP” on that.

Since the press kit lays it on pretty thick about his bonafides as an activist, I searched for a similar level of activism in the songs on “Think Bigs.” He was built up to the point I expected a cross between Chuck D, Speech from Arrested Development and Macklemore. That doesn’t emerge on songs like “Funkin’ Around” or “House Party,” which are exactly as deep as you’d expect on a surface glance, though the BPM of “House Party” was a little more mellow than I’d expected. “Pretty mellow” describes Bigs in general, the type of dude who “dips before the party gets whack” in his own words, not the type to drink until he blacks out or stay until two overly intoxicated people get in a fight over a simple misunderstanding. That’s cool. He’s also not the type to throw the word “love” around casually, even going so far as to censor it in “I L*** You,” but that’s actually an inside joke since it’s a very laid back track with a very rude sentiment. I would have chosen it for the first single but Bigs went with “Dollaz” instead.

This song hints at the social justice credentials you’d expect based on Bigs’ bio, and while he doesn’t say money is the root of all evil, he definitely opines that there’s a unjust social stratification between rich and poor. “Something that we kill for, something that we die for, something that we stay up at night and we cry for” – and then he ironically caps it off with Ray Charles singing “America.” You get the hint.

At first I got a little frustrated that Bigs never seems to kick it into second gear musically or lyrically, but eventually I fell into the laid back pace and California living that seems to come naturally to someone straight outta San Jose. He probably doesn’t even get hyped at the SAP Center (or as I knew it when I last visited the HP Pavillion) when the Sharks are playing – he just grabs a beer and chills (literally) with his crew. Again that’s probably the fault of my perception of him as an activist going in – I thought he’d be all hyped up and ready to strike down all forms of bigotry and oppression. That’s largely not his bag while rapping even if it is the rest of the time, so maybe it works best for him to partition his life that carefully, and if so then I commend him for it. Nothing about “Think Bigs” will figuratively or literally set the world on fire but for 35 minutes it’s nice enough to cruise around town to on a sunny day.