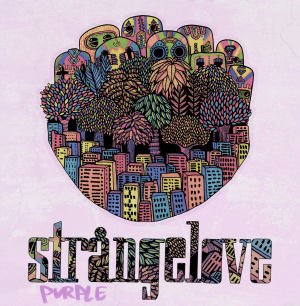 Every week I get at least three emails from artists who want me to review their self-released albums on Bandcamp. The majority of these artists do nothing for me. They often sound amateurish or are performing in a style I don’t like or both.  I always give the artists a listen, however, because sometimes I get a pleasant surprise. Strangelove is one of those happy exceptions.

Strangelove are a group from London comprised of rappers Freedom, Chango, Jakoboski, and producer Demeraera. The rappers all sound like blunted aliens, rapping cryptic rhymes in stoned monotones. The lyrics are hard to decipher, but they convey a feeling of dread and paranoia. They rap about a “silver spoon goon patrol” and “hoovering strong chemicals.” The rappers aren’t the most exciting MCs to ever pick up a mic but they compliment the beats.

The real focus here is Demeraera. His production manages to mix EDM, psychedelic music, and hip-hop into a big trippy mess. He puts some dubstep bass wobble in “Laura Jay,” but mixes it with a heavy beat and a jazz sample.  He’s got a little of the dusted Madlib vibe, sampling from Quasimoto on “Worlds Great Mystery.” “Feverish” mixes clattering drums with ominous keyboards. Demeraera manages to keep the heaviness of hip-hop while adding elements of electronic music. The result sounds like a contemporary take on trip-hop, as if the genre never devolved into yuppie make-out music.

Strangelove are apparently working on a full-length. If this five-song EP is any indication, their full-length is one to look out for. Their unique take on hip-hop is worth checking out.