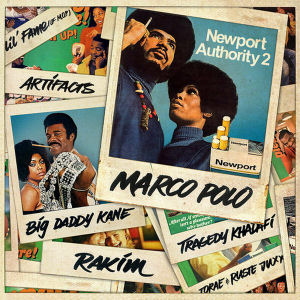 “Port Authority” put Marco Polo on the map back in 2007, a compilation of tracks that Marco produced for numerous rappers (primarily New York-based emcees). Having established himself as an excellent producer in the vein of fellow modern boom bap bringers Apollo Brown and Snowgoons, Marco has a New York sound that is unrivalled and often distinguishable. While Apollo Brown favours soul samples and Snowgoons use orchestral, industrious sounds, Marco embodies the thumping, hard snares and grimey bass more in line with 90s icons Da Beatminerz, and even DJ Premier himself. â€œNewport Authority 2â€ is thankfully shorter than the original, but then it is a record that Marco has put out to tide fans over until “Port Authority 2” drops in July.

“Fame for Presidentâ€ is a horrifying vision of M.O.P.’s barbaric outlook on life being enforced across the world. Forget the political motives, because Fame absolutely obliterates the soundbooth with a raucous showcase of everything great about the Brooklyn legend that is Lil’ Fame. Marco supplies a stabbing, drum heavy backdrop that feels like a punch in the face, ensuring you better listen to this album, or else. Following on from the brilliant â€œDouble Barrelâ€ and â€œExxecutionâ€ releases from Torae and Ruste Juxx respectively, Marco throws both in the booth to produce a rugged hip hop track that is basically about how hip hop they are. As generic as the premise is, the results are undeniably excellent. I wouldn’t mind hearing these two on a full length. â€œGospel Rapâ€ is a forgettable track from Malcolm & Martin that really doesn’t deserve to be before records by Rakim, Big Daddy Kane and Das EFX. That’s right, three classic acts return to take advantage of Marco’s refined brand of New York rap. â€œWhat’s Wrongâ€ sees Rakim display that he is still killing shit twenty five years after â€œPaid In Fullâ€, where rappers like A$AP Rocky are releasing albums having been named AFTER him.

Documenting examples of what’s wrong with the world, Rakim does his thing over a ridiculous production, combining an addictive vocal with Rakim’s smooth-as-butter delivery helping to make it the best song on the album. â€œBack to Workâ€ shows how limited El Da Sensei and Tame One are (or were) as lyricists. There’s no denying the smooth chemistry they have together, but even Marco’s beat can’t save the track, mainly because it isn’t the strongest either. Big Daddy Kane provides his presence on â€œNite & Dayâ€, where Marco samples Al B Sure’s “Night and Day” to great effect. The marriage of Big Daddy Kane, himself an 80s icon with the distinctly retro vocal only helps matters, and the addition of scratches just completes the package. Despite rarely appearing on the mic these days, Kane hasn’t lost his charismatic style. The same can’t be said for Das EFX, or at least they don’t sound as good as they were with “BK 2 NJ” seeing the heavy production outshine the riggidy-raps. It suffers from the same problem the Artifacts had, in that they require more minimalist beats to push the focus on to their rhymes. Hence why passionate emcees like Torae and Ruste Juxx excel on Marco’s beats.

It’s fair to say that “Newport Authority 2” is a little disappointing. Bringing back legendary names creates mixed results, whilst younger acts such as Midaz the Beast and Malcolm & Martin don’t do Marco’s production justice. There are some good songs here, particularly “What’s Wrong”, “Long & Winding Road”, “Nite & Day” and “Double Exxecution”, but the rest is forgettable, throwaway hip hop. Musically, Marco Polo does Marco Polo, with no “holy shit” moments that came when you heard Braille’s “The IV” or Ruste Juxx’s “Rearview”. A shame then, but that can happen when you put out so much strong work. Hopefully “Port Authority 2” delivers, because “Newport Authority 2” is good, but not the excellence Marco Polo is usually associated with.