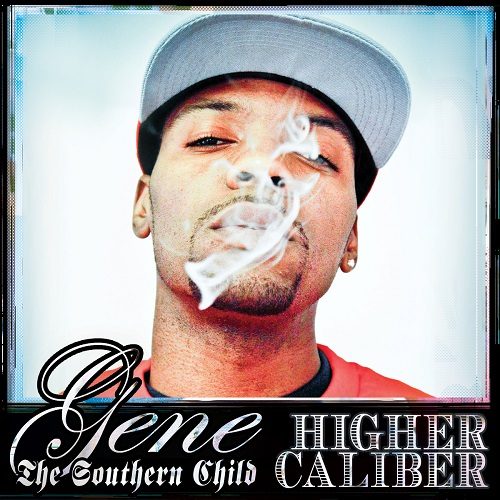 A couple of months ago RR tackled the Gene the Southern Child & Parallel Thought debut album. Coincidentally that album “Artillery Splurgin'” comes out today. What we have here is a selection of bonus tracks that didn’t make it into the cartridge with the rest of the ammo – a “Higher Caliber” of rounds to spray at listeners. I would say that they’re also being fired from a higher caliber weapon, but when you’ve got Parallel Thought producing the beats, it’s HARD to go any higher. He may not be as well recognized as Alchemist and Primo, but trust me, he’s right up there in their stratosphere.

“I done identified and recognized and notified
See this too much, for yo’ mind to even try to thank
See this too much, for yo’ eyes to even try to blaink
You could you cain’t, but if you would you should you ain’t
I’m tellin you nigga, competin won’t complete yo’ fame
Over the years despite my fears they built a Southern child
It take too much to smile, how can I touch a clown?
Bust in the crowd, and leave them niggaz wide open”

Yes that’s “thank” and “blaink,” not “blink” and “think.” If you don’t already know Alabama’s smooth-ass Southern Child, the country drawl of his flow is a natural part of his charm. In fact that charisma at the time covers for the fact that his platitudes could be typical of the regional artistry – well that and the fact P Thought’s spooky atmospheric music on “Snatchin'” is straight up hypnotizing. There’s a benefit to giving away the tracks of “Higher Caliber” for free download instead of selling them as a bonus disc or deluxe edition download of his new album – the 17 minutes of songs are a perfect sampler of what these two can do.

If an instrumental of “Step To” isn’t a bumper for [adult swim] in the near to immediate future, I’ll be shocked as hail – oh my bad I meant shocked as hell. Gene’s accent is just infectious – even though it’s just the normal Southern twang. In fact it’s not all that different from a Big Boi or a Young Buck, but Gene has that kind of “pimp” in his inflection and delivery that makes him a star of their caliber. There’s that word again – caliber. And Gene certainly makes no bones about his love of weaponry or of making threats with them with song titles like “Four Rounds” and dark moody tracks like “Carry On.” If you’re squeamish about violence in rap lyrics or worry they desensitize today’s youth, Gene’s not your kind of emcee. He’s fun though – in the same way Al Pacino is fun as Tony Montana. It’s over-the-top, but it’s explosive entertainment. Gene would like you to say hello to his little friend – and his name is Parallel Thought.