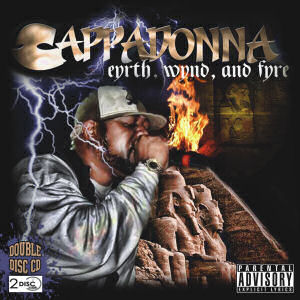 Despite all the criticism he’s received over his career for his nonsensical lyrics and poor albums, I have to admit that I’ve always quite liked Cappadonna. No I don’t own all his LP’s (I have the first 2 and a more recent one) and I’m not here claiming him to be an under-appreciated legend, but I’ve always liked his voice and stylistically there is a trace of old school MC’s to him that really grabs me (as with the similarly oft-maligned U-God). Further to that, he seems to be a genuine guy and epitomises the struggling artist trying to make ends meet and feed his family, whilst staying true to his core sounds (albeit with mixed results). I will even go as far as saying I’ve felt a bit sorry for him with his Wu-Tang Clan identity crisis, sometimes being on the inner sanctum of the group, other times on the outer, and to that end I think there’s often been confusion (for the fans at least) as to where he really sits with the Wu.

Having put the above praise out there, I’m not going to pretend that the thought of a new Cappadonna album excites me, as I’ve always approached his releases with trepidation and have passed on owning more than half his releases due to not being impressed by preview listens. However, a DOUBLE CD from Cappadonna brings new levels of doubt, as even the recognised greats of hip hop don’t always succeed with their multiple disc ventures. It’s an album format that always comes with that higher risk factor of flopping, so props to him for having the confidence (or perhaps the audacity) to release such a project. Particularly so when he isn’t blind to the barbs being thrown at him, as evidenced on “Real Talk”: “I see y’all niggas over there keep talking about, yeah Cappadonna this, Cappadonna that, Cappadonna can’t rap”. You could say this double album is a cocky act of defiance against those haters.

For those of us who are wary of so many songs in one hit from the man, at least he makes it a bit easier to digest the amount of music on offer, as the two discs do feel like seperate albums. Aside from one track, Disc 1 is produced by J Glaze and has a uniform sound, as opposed to the second disc which is more a mixed bag with compositions from a range of producers including Wu fam cohort Kevlaar7. It’s probably not what Cappadonna intended, but one benefit of the different feel between the discs is that you’ll probably end up choosing a favourite and stick more to that disc in the future, and I’d be very surprised if your preference isn’t Disc 1 (titled “Eyrth, Wynd & Fyre”). Not only is it FAR more cohesive in sound, it’s better structured and feels carefully put together, and if the whole project was this single disc alone I’d rate it as one his best albums as it is surprisingly good.

Cappadonna has refined his style over the years, leaving behind the lyrical gibberish he was once chastised for, and presents as a far more mature and lucid MC. The other just as vital redeeming quality of Disc 1 is the dope set of beats on offer from J Glaze, who was previously unknown to me but made a very solid first impression. His sonic template (which he doesn’t really stray from) is basically rough and dirty drums, off-kilter prominent piano keys, with the odd dramatic loop and horn appearing here and there. There’s not much in the way of chipmunk sounding sped up vocal samples, no synthesized keyboard business or any other of the more typical production elements heard these days. He does enough to give his section of the album an underlying “Wu sound”, but maintains his own style, which is refreshing as too many wannabe Wu producers have butchered the sound over the years leading to undesirable results.

More than the beats though, I’m pleased with what Cappadonna is bringing through the microphone. No he’s never going to go anywhere near the lyrical depths and wit of Killah Priest or RZA, nor will he slice tracks with the verbal swords of Rae and Ghost, and he couldn’t buy the charisma of Method Man for all the money in the world, but in his own straightforward way he’s displaying a level of consciousness appropriate to his age and experiences in life. As he states on “Puffed on Pride”, “now it’s time to bring light to the 85”:

His social commentary covers a few bases, and “Pull Your Life Together” speaks on putting yourself in the shoes of the less fortunate and trying to adjust your life for the better:

Aside from the discourse about the world around him, Cappadonna isn’t shy to get open about his own life and you’ll hear many references to his family and how he’s striving to provide for them. The dramatically scored “Children of Israel” lacks the religious ideas that the title suggests, rather it’s a very direct example of Cappa looking out for his seeds:

“I believe the children are the future
I’m trying to raise my kids, get paper, stay low
Jump on a plane, jump off, now I’m back at the next show
All my life, I been tryin’ to do it just like that
Stay heavy on my grind so I can get right back
To my children, they be my whole world
Yeah all of my sons and all my little baby girls
I’d kill something to protect my pearls
Yeah early in the morning I be getting them up
And even though they still tired I be sittin’ them up
Get them ready for whatever because life is so tough
That’s my children in the mirror when I’m lookin’ at me
Ground out a few years now the better I see
All my children stay in the front”

It’s not all life lessons on show here, as Disc 1 brings some bangers where the focus is more simply on Cappadonna rocking out hard. “Body Rock” does as the title implies and Cappa turns up the energy in his rhymes to match the ruggedness of the beat. “Hustle Game Tight” strips off some musical energy and replaces that with a more ominous desolate feel, and curiously Cappadonna comes off sounding not too dissimilar to KRS-One vocally (or maybe even a bit of Just-Ice). Following suit with further doses of powerful impact are tracks like “Better Life Movement”, “Creature Feature”, and “In the Dungeon” which haunts enough to be honest to the song name.

The songs here which are going to make that Wu tattoo on your shoulder tingle most are “God Forgive Me for My Sins”, “Rap Is Like Crack” and “Boogah Hill”, all having the type of pronounced piano component utilised so well by RZA. In fact, any of these songs would have benefitted from appearances from Meth, Deck and co. but there is not one core Wu-Tang member on either disc (not too surprising given Cappadonna’s “is he/isn’t he” relationship with the crew). Actually guests are few, as ten of the fourteen tracks on Disc 1 are carried by Cappadonna alone, and again I have to compliment the guy for trusting in his own abilities to carry the bulk of the songs. We do get a couple appearances from Show Stopper and one verse from Solomon Childs, but they add little to the album and I think Cappa could have done the whole disc solo.

As for Disc 2 (AKA “Love, Anger & Emotion”), it starts off pretty good but drops off so badly as it continues that it becomes a test of patience to not turn it off before it finishes. I actually suspect it’s been thrown together hurriedly as a bonus CD: five tracks clock in at a bit more/less than two minutes, a couple songs get cut off with sudden fade outs, two feature guests who are uncredited on the cover, and really most of it feels like leftovers from old projects or mixtapes. Funnily enough probably my favourite track across both CD’s appears on this disc (track 2 “Real Talk”), it features great beat change ups and Cappa and his younger brother Lounge Mode shine on here, particularly baby bro Lounge who rips the last verse (Lounge Mode appears on 6 tracks on this disc, and sounds like a lost member from Ice-T’s Syndicate crew from 1988). Another positive is the following track “Welfare”, a bona fide hard firing and funky track that features the brilliantly intense Sav Killz, whose take no prisoners delivery sounds like an aggressive Killah Priest or Immortal Technique.

Beyond those first couple tracks, highlights are very few. Many of the tracks have blandly executed sped up soul sample type production, or otherwise we get something like “Socializing” which is a calypso meets funk hybrid mess, or the cheesy sci-fi synths of the very throwaway 1 minute 27 second “Chains” (where Cappa reminds us that he hasn’t totally lost the ability to say bizarre things like “drink cow piss nigga”). Frankly it all gets quite horrible towards the conclusion of the CD, with Cappa getting into the habit of singing his choruses (he does this on three consecutive tracks) and/or sounding quite disinterested in his rhyme delivery. “Baby Mommas” emphasising those traits, whilst it’s a personal and touching sentiment from him, his chorus vocalising and half-asleep, bored rhyming doesn’t lend itself to an interesting nor entertaining listen:

Not that I’m one to change albums around using iTunes and such, but if I was that way inclined I’d take all of the first disc, add on the three or four good songs from the second one and re-package my “Eyrth, Wynd and Fyre” album that way (and it would get a score of 8 or 9 here). Speaking of packaging, whether the album’s Egyptian based artwork is a simple nod to Earth, Wind and Fire and their links to Egyptology, or a deeper significance to Cappadonna being in touch with the elements, it’s probably a cover more apt to the likes of Killah Priest or The Lost Children of Babylon as it seems rather odd to see a Cappadonna album wrapped up in hieroglyphics and pyramids. Whilst this album doesn’t work as a two disc entity, the dope stuff here indicates that Cappadonna is in better form than he’s been in for a long time and he has the potential to make excellent albums in the future, given the right production combined with maintaining his improved attitude lyrically.