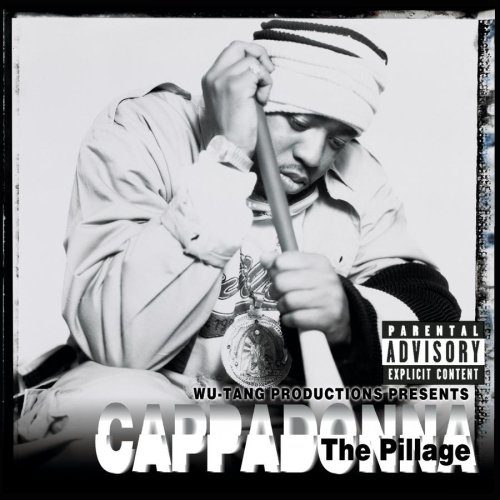 Going 20-years strong, the Wu Tang is busy as ever, with several members actively releasing and recording new projects. Approaching 15 years since his debut solo album, Cappadonna continues to be among the Wu’s most prolific and consistent members. With his 7th solo venture “Eyrth, Wynd and Fyre,” Cappadonna fills two discs and 28 tracks with his sharp lyricism and a great sense of humor.

I got to speak with the Wu Solider, and we discussed several topics that span from the possibility of a new Wu-Tang LP, to domestic violence, to his singing career, to his approach to making music – as he sums up best on the track “It’s a Man’s World”: “I just sit up in the booth, and bust the beat up.”

RapReviews: What is the story behind the title “Eyrth, Wynd & Fyre“, and does the spelling have any meaning behind it?

Cappadonna: It’s all got a meaning. It’s life’s elements, you know. That Earth that solid foundation. And that wind, that wisdom. And that fire, that purification, ya know. I already told you before that “y,” the reason why I start everything with a “y” is because it’s a question most asked by 85% of which be the dumb, deaf and blind. But it’s also a question asked in search of the truth. The blind is for the ones that can’t see the truth, and that’s why they blind. And the ones that (are deaf), the reason they deaf is because what you say go in one ear and come out the other. The reason that they dumb is because they don’t have the knowledge of self – they searching for somebody else’s knowledge.

RR: J. Glaze produced most of the first disc, why did you work with him so much?

C: We fell into that orbit, right there. It was like, I was going through a lot of tracks that he did, and I’m the type of person, I love to spit. So while he was playing the tracks, I was like ‘alright let me go ahead and assassin some of these joints out.’ But he gave them to me on a CD first, so I was able to go and sit down with ’em, chill out with ’em, talk to ’em, and that was how I was able to, when I came back to the studio, just smack them all in the head.

RR: What made you want to do a double album?

C: The beats, the beats was just grabbing me in a certain kind of way, and it was just coinciding with how I was feeling at that time. A lot of times it’s for a reason, or a season, or a lifetime. It could’ve been a seasonal thing, but at the same time it was something that needed to be expressed. And I got that out right there, and I’m satisfied. It was going to be a mixtape. A lot of my albums was like that. I never really sat down, and just decide the album and shit. I just do whatever I feel and shit.

RR: So you didn’t originally set out to make a double album?

C: Nah, not at all. It was a blessing that everything added up to that. I’m a builder, so sometimes I take nothing and keep adding on to it, next thing you know I got a whole pie.

RR: I always thought of you as one of the more energetic and harder rappers in the game, do you think this album gave you a chance to show off your versatility?

C:It was my own challenge against myself to explore into different avenues. It don’t feel to me like it was that different because I’m usually just a slow flow-er, and that slow flow is evident in the majority of the album. The content of the lyrics may have changed occasionally, in different avenues, but it’s still basically a slow flow. With me and Lounge Mode on the second CD was more like just ping ponging back and forth, dealing with a more upbeat kind of thing. But even that album, a majority of it is slow. What I want to do now – I want ante up. I want to make this one more energetic. You know, how fans view me as being more energetic, I want to tap more into that energy and get everybody up.

RR: One of my favorite songs on the album is “Baby Mommas” What made you decide to sing on the hook?

C: I love to sing, man. My thing about singing and how I view it, and how I view everything when it comes down to artistic creativity, I look at everything as just passion. I believe passion supersedes talent. And that passion is why we accept some of our artists today. It’s not just me singing and being able to sing to the standard of how the industry feels like to be in order to be accepted in their corporate society, but as opposed to being one who sings from the heart. Sort of like how O.D.B. did it; he hit some notes, man. Same with James Brown, they couldn’t even write his music because they couldn’t figure out what the hell was going on (laughs). That’s how I want to be.

RR: Do you think you’ll do more tracks in the future with you singing?

C: There’s no real limit to talent. Society just tries to hold your talent back. I’m a do it all, I’m gonna sing, I’m gonna go into all kinds of musical avenues.

RR: Did you approach creating this album any differently than you did with your other albums?

C: Again, like I said it was a surprise attack. I didn’t really plan it, so it was like, it went well. My approach was keep making songs, and I’m still taking that same approach because at the end of the day there’s nothing that sells better than product. You can talk all that shit you want nigga, but if you ain’t got no album, you can’t deliver.

RR: You have some experience with 2LPs in the past, as you were heavily featured on the Wu Forever album, was there a big difference in recording this album than collaborating with a group?

C: Of course because with this album is more me. It focuses more on my viewpoints. It focuses more on things that kind of things I’m attracted to. With the Clan, there’s a lot of different energy there, so I might say something to blend in to coincide with something that they speaking on. When I’m doing it, I can create my own topic and speak on whatever I want to speak on, and do more songs like “Baby Mommas” or avenues that they’re not. That’s a major thing that goes on in human families today. There’s conflict with between baby mothers and baby daddies. I was watching on the news the other night that Obama just passed another battered women law. So all them dudes that think they’re just gonna be pounding out and emotionally and mentally abusing these women, they going under the ground, g. They going to jail.

RR: There has been talks about a possibility of a new Wu-Tang album for the 20th anniversary, do you think there is going to be an album?

C: Yeah they’re recording. But at the same time it’s still a lot of nonsense that needs to be aired out. But we working out. They waiting for me to drop some bombs. I haven’t recorded nothing yet. I’ll be over there though.