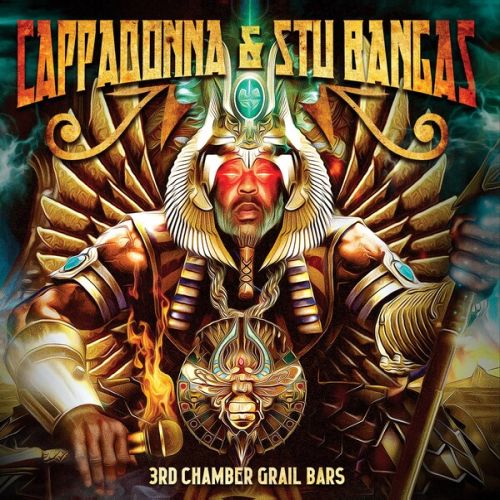 After going viral on social media last year with that infamous album artwork for “Black Tarrzann”, Cappadonna returns with an album decidedly more serious and Wu-Tang-like. With artwork reminiscent of the Wisemen (and Nas’ “I Am…”) and recruiting underground favorite Stu Bangas, Cappadonna offers up some rhymes from the 3rd chamber – a chamber that’s not really been explored in the Wu-Tang pantheon. GZA, Bronze Nazareth, Wu-Tang Clan, Inspectah Deck, Popa Wu, and CZARFACE have all explored the fourth, fifth, seventh, ninth, tenth, and twelfth chambers, so leaning into the chamber theme always feels like one for the Wu heads. Stu Bangas makes sense as a collaborator as his tried-and-tested style has worked effectively over the last decade with numerous underground mainstays (Esoteric, Mr. Lif, Ill Bill) and he’s not compromised his work here to try and emulate Wu-Tang. The two have worked together previously though, back in 2013 on “We Hood Rich Now” and “Chains”, for Cappadonna’s underrated double-disc “Eyrth, Wynd and Fyre“.

The Stu Bangas crunchiness fits Cappadonna well, but there’s a disparate energy throughout the album that is difficult to ignore. Some solid collaborations are padded out with nearly a third of the record taken up by “Intro”, “Outro” and two instrumentals which is admittedly disappointing given this is advertised as bars. “Get Lost” even has a full minute of adlib filler where a verse would (or should) have been. That’s not to say there isn’t interesting material here for purists – the ominous stomp of “Toss the Blick” includes a rare Celph Titled appearance and his over-the-top approach completely dominates. Similarly, Planet Asia shines bright on “Continous Threat” and Ill Bill impresses with only half a verse on “Tryna Survive”.

The way Cappadonna ignores the traditional flow pattern of a beat means he’s always been a bit of an acquired taste, as his rhymes shift their focus toward imagery and slang, and possess a monotone delivery. He switches it up on “How We Rollin’”, which reminds me of the track “Supermodel” although the Big Shug-style harmonizing feels unnecessary. “Everything is Measured” feels more like classic Cappadonna, utilizing the theme of his “The Ying and Yang” album: Buddhist wisdom and a knack for transforming philosophical statements into hard bars. It’s hard to criticize Stu Bangas’ contributions throughout, however; these beats do provide solid foundations for emcees but the nature of Cappadonna’s style rarely owes itself to holding down full tracks with just bars. It’s probably why, out of all the core Wu-Tang Clan members, his solo albums aren’t as memorable as his individual verses.

This would have been a dope mixtape, as it feels fairly barebones without a DJ. Beats have spaces in them and Cappadonna sounds lonesome. The story behind this collaboration is surprisingly revealed on the album’s Bandcamp page merely as Cappadonna had a folder of instrumentals from Stu Bangas and he felt the urge to write these rhymes. That’s essentially what this project is, with the two singles also oddly Cappadonna-free, it could well be quickly overshadowed by his recent track with True Master aimed at The LOX.

Nobody expects greatness from Cappadonna in 2022, but the Wu-Tang stan in me still believes the capabilities are there, and there are brief moments on “3rd Chamber Grail Bars”, but this is altogether too sloppy to recommend to anyone but the most devout Killa Beez collector,