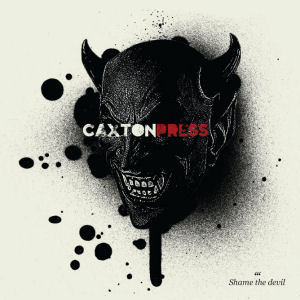 Never judge an album by its cover is an adage as old as the devil himself. You could be excused for thinking “Shame the Devil” is a heavy metal record, or one of them nasty, horror-core hip hop albums boasting a thousand different ways to kill something. Personally, I was reminded of the old Wishmaster films from the late 90s. I digress, but “Shame the Devil” has more in common with horror movies than you’d think. Caxton Press are a group from London consisting of DJ Snuff, Profound, Manage, Kingpin, Amy True and Emcee Killa. Presenting their views on the evil message that today’s mass media allegedly feeds us, you’d be forgiven for thinking this is another record full of conspiracy theories and contradictory messages on how powerless the consumer is compared to companies like Apple and Google, yet we must somehow fight that power. We’ve all heard the â€˜anti-mainstream’ message that underground hip hop is seemingly obsessed with lately, and whilst Manage (and Snuff) have gone down this road before with the Chain of Command group (alongside Conflix and Skandal), Caxton Press is somehow invigorating. There is a chemistry between the elder statesmen Manage, who guides the two fellow rappers Emcee Killa and Kingpin through some of the grimiest production this side of the pond.

Musically, “Shame the Devil” certainly isn’t the darkest record on the shelves, but it’s far from happy either. Producer Profound fills each track with booming bass and depressive pianos, carving out a bleak image of run-down London neighbourhoods. “Why” is the slickest example of Caxton Press’ brand of rap, a morbid outlook on how the poor and vulnerable are taken advantage of by the system, Kingpin delivering the best verse:

Kingpin is a young voice that already possesses a beautiful flow, whilst Emcee Killa is more upfront in the vein of Dirty Dike. Except Killa is devoid of Dike’s humour throughout the album, instead providing relatable rhymes in a passionate manner. Manage has acquainted himself with two emcees that actually usurp his hollow content, and somehow steal his shine. Manage has always been a solid MC, with his solo effort “Live In Protest” benefitting hugely from guest appearances and monstrous beats. Associating himself with talented people has always been something Manage has had under lock and key, so it’s odd to see the addition of a female artist called Amy True. That’s not to say that she isn’t talented, but each appearance from her is an indecisive brand of singing that is part rap, part crooning. Whilst there have been plenty of sultry singers doing their thing without forcing (think Aaliyah), Amy True’s voice doesn’t have the presence nor power to add anything substantial to her colleagues’ work. She is passable on “Broken Dreams” providing a scruffy hook, but hard to tolerate elsewhere.

“The Press” is the perfect example of three strong rappers tearing apart a vicious beat (Kingpin again demonstrating his verbal dexterity), ultimately ruined by Amy True’s child-like vocals. After spitting a few rhymes, she goes into Ms. Dynamite â€˜hybrid-mode’, trying to apply some X-Factor-level singing with all the soul of Tulisa. “Runnin'” also shows Amy to have a complete lack of flow. Thankfully Kingpin’s refined delivery paired with Killa’s vivid rhymes hold down the majority of tracks, with each getting their own chance to shine indiviudally. Kingpin provides a strong statement of intent on “The Breakout”, sounding eerily like Lowkey, whilst Killa’s effort is the storyled “Big Buck Star”, a true tale of drug-fuelled paranoia that happened to end the life of a young friend of Killa’s.

There’s plenty to enjoy on “Shame the Devil” despite the pessimistic mood. Beneath the aggressive backdrops and “wake up to real rap” message running throughout, tracks like “I Wanna See” and “Lionhearts” possess refreshingly positive rhymes, with a complete lack of foul language and the obligatory N-bomb. Granted, Caxton Press can sometimes dwell on their visions of horror, but it’s not overbearing despite a distinct lack of humour. With some fine tuning, Caxton Press could be up there with the Rhyme Asylums and Triple Darknesses, holding the mantle of best British Hip Hop group in the coming years.