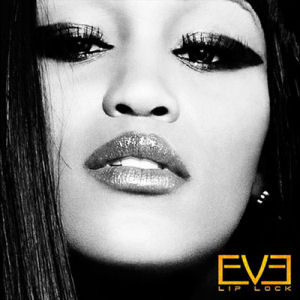 There have been some pretty long layoffs between second and third albums in hip-hop, but the gap between “Eve-olution” and “Lip Lock” is nearly record setting. The only reason I can’t definitively give Eve the crown is (1.) my copy of Ego Trip’s “Book of Rap Lists” isn’t handy and (2.) I’m sure there are at least several old school rappers from the late 1970’s or early 1980’s who waited more than a decade to make a comeback. Nonetheless if you presumed she had retired from rapping to work on her fashion line (Fetish) or her acting career (“Barbershop” and “Glee” come to mind) you couldn’t be blamed. A few singles came like “Tambourine” came out in 2007, but that was already a five year span as it was, and a new album never materialized.

It’s worth noting that Eve was once crowned “Ruff Ryders’ First Lady” on her 1999 debut. Flash back a two decade span and she was seen as the female hip-hop version of DMX – a pitbull who would bark and growl as loudly as he did. The paw print tattoos on her chest are a reminder of that heritage, but you won’t see them on “Lip Lock” and wouldn’t even know they were still there without a Google search. You also won’t see the Ruff Ryders logo, nor a cameo from Earl Simmons, and in fact any vestige of that past seems almost entirely erased. That’s nobody’s fault but Earl’s – it’s pretty hard to run a music empire when you’re in and out of prison every other month. That may have contributed to Interscope’s lack of satisfaction with her status back in ’07, or the fact she had to launch her own imprint (From the Rib Entertainment) to finally put a new CD out. The swagger is still in tact though – she’s the bitch you “Wanna Be”:

“Yeah! Been a couple years and the game done changed
Shit watered down, fucked up, so mundane
Where the real G’s at? Man fuck these lames
My money still long so I can’t complain
My life insane! Shit oh so cray (oh so cray?)
So so cray – man I ball out every day”

The new album finds Eve flexing her newfound freedom and working with a variety of artists and producers. The aforementioned track is laced by Blac Elvis, who uses hard hitting ebony keys and rapid fire drums to give the song a dark throbbing intensity. The guest verses by Nacho and Missy Elliott compliment Eve but don’t steal her spotlight, and much like Eve one can say Elliott is a female hip-hop star we don’t hear enough from these days. The Jukebox produced lead single “She Bad Bad” and its companion remix featuring Juicy J and Pusha T are edgy and futuristic – taking a foreign language loop for a spin and pairing it with power drill synths and a minimalistic finger snapping drum track. That description doesn’t sound flattering at first, but the song is hypnotic and sticks in your head.

There are plenty of stand-out songs on this short 40 minute album – too short for my liking. “Make It Out This Town” is a surefire single thanks to the pop friendly production and hook sung by Gabe Saporta. “Mama in the Kitchen” has a guest spot by the recently “Reincarnated” Snoop Lion, and her strut exceeds his swag – maybe a full verse from S-N-double-O-P would have helped. Perhaps the most apt songs are “Never Gone” featuring Chrisette Michelle and the Salaam Remi produced “Forgive Me.” The former reminds us that she may have been inactive on the Billboard charts and busier on the silver screen, but she never lost her love for hip-hop. On the latter she brags “I’m taking over [..] plus I’m the closest thing to Oprah” and though their net worth is vastly different it sounds plausible in context coming from her lips.

Not every track on “Lip Lock” is a home run, but she bats for the cycle here and only strikes out a few times (“Keep Me From You” is just too cotton candy for me). That’s pretty incredible given how long she’s been away. Who knows? Maybe she’ll end up signing DMX to her imprint. She’s got her life together, her businesses are successful, and she’s still a bad bitch – but no longer afraid that showing her feminine side will make her come across soft or weak to a misogynistic audience. She can be the pitbull when necessary or the poodle when she feels like it and it’s her flawless ability to switch it up that commands your attention.