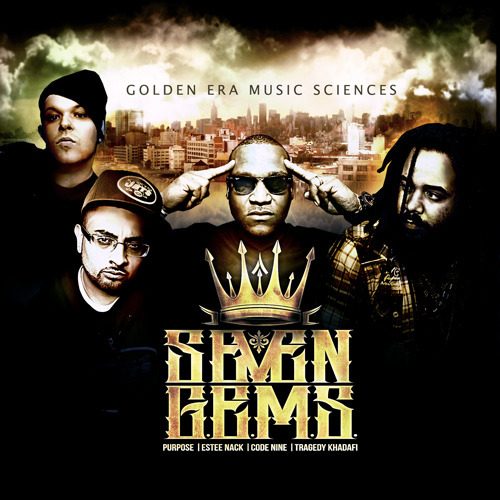 Seven G.E.M.S. are Tragic Allies and Tragedy Khadafi. I was unaware of Tragic Allies’ existence until I understood “The Purpose of Confidence”, a slick throwback-sounding album from the brilliant young producer Confidence. Despite the top sounds being provided by Confidence, Purpose more than held his own on the record alongside his Tragic Allies’ partner-in-rhyme Estee Nack. It was an easy to listen to, East Coast head-nodder that brought about heavy rotation amongst the underground in 2012. Purpose has returned in 2013, this time with Codenine and Estee Nack (the trio forming Tragic Allies), as well as Queensbridge legend Tragedy Khadafi. Despite losing the sublime sounds of Confidence, “Golden Era Music Sciences” remains firmly entrenched in boom bap territory, with Purpose producing the whole album himself. Before you run for the hills at the prospect of a good emcee producing his crew’s album, “Without You” is proof of the quality Purpose can deliver.

Combining Estee Nack’s infectious reggae-tinged hook with three emcees tearing shit down is a recipe for success no matter how unoriginal it is. There is an effortlessness from Purpose when he raps, the way he rolls words together is reminiscent of early Nas, but whilst Nas brought vivid imagery to the forefront on classic tracks like “NY State of Mind”, Purpose and friends flirt with it. But then being an album that fully embraces the Golden Era of Hip Hop, you can’t expect every track to contain stunning lyricism. The difference, and it’s a subtle one, is that Seven Gems are very good rappers. They are helped by Purpose in particular, as he provides some production that many emcees would kill for. If like many Hip Hop heads, you’re a sucker for 90s rap that has that classic CNN/Mobb Deep production, it’s hard to knock the beats. The few let downs come in the way of “Presume the Unpredictable” inexplicably muffling Nas’ classic line on the hook, coupled with a limp production and average verses. It’s only worth listening to for Roc Marciano’s ridiculous ramblings of his ‘private dancer drinking panther piss’.

“No Good” certainly isn’t that, in fact the beat is too good. Suffering from dreaded Dipset-ism, whereby a ridiculous vocal loop is paired with a swinging bass-line that totally dominates any featured vocalist. “Dem Get Murda” is a more sinister approach to cyphering, with Khadafi proving his garrulity is unmatched when it comes to grim scenarios. It’s refreshing to move away from the predictable MC 1, MC 2, MC 3, MC 4 pattern that sometimes bogs the album down, as although each emcee is distinct, they aren’t clear-cut characters that groups such as The Demigodz contain. “Time To Ponder” sees Estee Nack provide a solemn verse amidst more reflective musings from Codenine and Purpose. The hook is again catchy, but not as enjoyable as it could be. Fans of Tragedy Khadafi can hear him at his best on “Men of Honor”, combining street narrative with prophecies similar to Killah Priest (who happens to rear his godly head on “Verge of Defeat”). Khadafi adds an air of authority to the likes of “Foul Thesis” which is full of immaculate flows, including a hungry Shabaam Sahdeeq rolling back the years.

Shabaam Sahdeeq is probably the easiest way to sum up “Golden Era Music Sciences”; dope flows but ultimately average content. Of course, rapping about the streets and how authentic each member is has been done a million times, a good number of those from Tragedy himself. The fact of the matter is, “Golden Era Music Sciences” excels beyond being just another street rap album as each rapper is refined, possessing a pleasant presence and providing an enjoyable, if unspectacular album to keep your neck snapping.