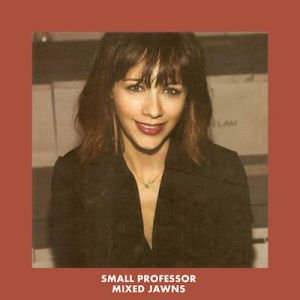 It may seem like Small Professor is trying to make a political statement of some kind by calling his album “Mixed Jawns” and putting Rashida Jones on the cover. Actually, he’s not. She’s incredibly good looking, and not a bad choice to grace the cover of ANY album, but the well regarded musical maestro is not talking about any kind of integration other than of culturally divergent sounds. In fact he’s not doing any talking at ALL. Small Pro lets his music speak for him.

You can try to draw allusions from the song titles if you like, but I’m not sure that works any better than drawing one from the album title. Take “Bloody Mary” for instance. One might assume from the Spanish guitars heard on the song that it could be the drink in the hand of a dusty ranchero walking into a Mexican watering hole in a gritty pelicula. The hypnotizing track could also easily find its way into a film by Quentin Tarantino. It’s that evocative, that powerful, that pleasurable to listen to. And yet there’s a better chance the song titles reference mixed drinks – there’s a punchy “Vodka Gimlet,” a Kanye West-esque “Miracle Margarita” and even a funky and seductive “Apple Pie.”

At first I doubted this could really be the theme – after all the song “Charlie Brown” certainly sounds like it samples the Vince Guaraldi style piano of Peanuts animated specials of my childhood, but after checking around I found a cocktail of the same name made with cognac, drambuie and cacao liquer. I guess I don’t drink enough. Surely there couldn’t be a “Herbie Hancock” though – that has to be a reference to his fellow producer and instrumentalist. Nope – a Herbie Hancock has beer, orange juice, pineapple juice and rum in it. I bet it’s just as sly and funky as his song – something that doesn’t seem like it should come together that is greater than the sum of its parts.

Small Professor is playing games with my head though. Just when I thought I had him figured out and all of the songs were strictly about the drinks, I heard the distinctive James Brown style drums and JB’s trademark “HEH” on the song of the same name. Some people might be annoyed that Small Professor doesn’t want to make his intentions clear or lay out who and what he’s mixing, but like so many good mixologists he likes to keep a few secrets. That way the customers can’t just make the drinks at home – and even if they had the recipe they might not use the right proportions or chill the ingredients the right way. In the end Small Professor is a hip-hop mixologist, and if there’s a point to “Mixed Jawns” it’s that he deserves credit as such. I could use all the same breaks and never mix up something as good as this, and neither could (most of) you reading this. Listen and enjoy.