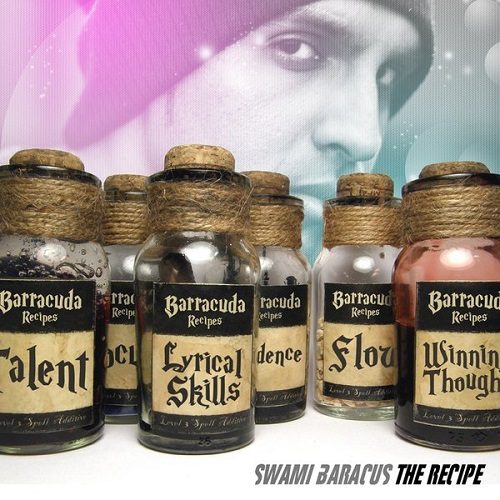 If ever there were a “RapReviews.com Sound” this would probably be it. “The Recipe” – a free mixtape by Swami Baracus – has been a long time coming (about two years, in fact). Now that it’s here and real, it soon becomes crystal clear that Baracus has delivered on the promise and emerged as an elite wordsmith. In some ways, he’s got that “old school mid-90’s flavour” on lockdown, but there are many more strings to the Baracus bow, as he fires his lyrical arrows at a variety of targets, with dizzyingly accurate wordplay somewhat reminiscent of Big Pun. It’s wonderful to witness the evolution of an artist over time – even as recently as three years ago, Swami Baracus had yet to release very much in terms of concrete output. After a few missteps, he seems to have doubled down and found his voice, style and a general narrative. There is no back-story here – just a genuine hip hop head with talent, lyrics to burn and the flow to match (incidentally, he’s also a very accomplished live performer). Perhaps this step up is down to one predominant factor – finding the right beats to both inspire and bring out the best in him. It’s still criminally underrated on the underground scene, where naive MC’s frequently think/hope they can carry an entire album through their words alone, but the music matters. From the off, it’s clear that Baracus has sourced carefully selected production more or less throughout.

“Way of the Dragon” has got that head-nod shit on lock, with piano stabs and breakbeats combining to excellent effect, while Baracus spits for about two and a half minutes straight. It’s a great way to start the mixtape, as it proves from the get-go that you’ve got a rapper able to handle the mic with aplomb. An overlong intro follows with just a few too many snippets of radio DJ’s lauding the title track (two and a half minutes borders on self-indulgent), but it eventually leads into the blindingly brilliant song “The Recipe” (with stellar production from Zaheer). It serves as a mission statement for the album, and is pretty much the perfect concoction of choruses, rhymes and concepts.

Another Zaheer production follows, with “Let It Burn” displaying Swami’s social commentary skills, a song that addresses the youth, riots and clashes with police (Mystro and Lost Souljah provide valuable assists). The slow burner of “Believe In Me” is buoyed by a deceptively catchy hook from RKZ, and it’s clearly a very personal tale of the long road the “Baracuda” has faced to even release his tape. A short freestyle (“Swah-Mi”) finds the MC dovetailing perfectly with Sway (they really sound perfect together), and another highlight is hot on the heels. “Stop/Search” rallies against the cops and their questionable practices, such as racial profiling – bizarrely, Baracus probably has the bronze medal verse on the song (it is good, but Genesis Elijah and AC straight kill it). “See Me” recalls the dark menace of “Dig A Hole” – except this is vastly superior in every way. “Pull Me Down” is another joint that punches well above its weight – honestly, this sounds like a $250,000 Timbaland beat, with an alchemic chorus from Byron Gold.

Another subtle wonder finds Angela Tharma delivering a lush hook, and we find Baracus in an inspirational mood – “Shine” will stick in your head after a few spins, and refuse to leave quietly. The first questionable moment of the mixtape arrives next, with “Watchugot” possessing a decent beat, but the concept is about a decade out of date, with little replay value to add. Fortunately, a strong one-two is waiting in the wings, with “Stand Strong” acting as a love letter to Swami’s hometown, and “The Slipping Game” cleverly detailing an apparent groupie/succubus over a stunning beat (though listen very carefully). Unfortunately, the outstanding candidate for “how did that slip through the net?” is up next – Baracus may do a fine job on “Undefeated” but the beat isn’t quite there, and the chorus is just completely substandard (especially in comparison to the rest of the songs on offer). “This Long Road” is – as the title suggests – a dramatic/personal detailing of the struggle most rappers face, balancing their dreams with reality. It’s solid, but wasn’t entirely necessary if we are talking about strict quality control.

The last official song is the joyful “Salutations” – if you follow him on Twitter (@SwamiBaracus), you’d understand why that song title is so carefully chosen. It’s a pleasing and soulful way to end the mixtape, although there are still a couple of bonus cuts. Bizarrely, Baracus has chosen not to include the original version of “Hyper” – opting instead to provide the “Clique” remix. Vocally, it may be the most spellbinding delivery he’s ever managed (reminiscent of Busta Rhymes on “Look At Me Now”) so it’s perplexing as to why it’s not a centrepiece to “The Recipe.” Still, it works well and at least provides DJ’s with something to drop in a club set. “Ascension (Mellzo Remix)” is another interesting song, with SB switching up his flow, and again, you may wonder why this didn’t make the cut (and, conversely, why songs like “Undefeated” did). But in the end, you’re talking about a free mixtape that is only a couple of songs too long, possessing pretty much an hour’s worth of top quality music.

Swami Baracus is a beast on the mic. In fact, maybe “beast” is the wrong word. He’s more like a surgeon: deliberate, clearly putting thought into each and every line, and he’s got concepts/flows to burn. Plus he knows how to write a song from start to finish, and now he’s (more or less) got the right musical production as a bedrock. He applies that “hip hop head” ethos to modern tracks as well as more throwback ones. Aside from a couple of songs, there’s easily enough here that will impress the hell out of you, guaranteed. There are a million and one rappers out there, most of whom will bombard you with free albums, mixtapes, songs and videos. But which ones are truly worth your time? Well, usually that’s intrinsically linked to how much time the artist has put into their craft. That’s self-evident on “The Recipe” with an MC who has dedicated himself to improving, and now that he has finally released a mixtape, it’s exciting to see what happens next. Swami Baracus is attempting to earn your time, respect and ear – but he may well have earned himself an invitation to the upper echelon of rappers, and the production that accompanies it. Either way, this is an essential free download.