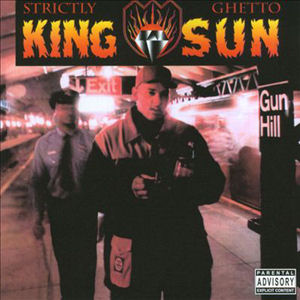 In his heyday King Sun was almost a model rapper. With his commanding baritone, precise metrics and topical writing he was a rapper you had to, at least to some degree, take seriously. He may have been responsible for rap music’s first lyric begging for a ‘(no homo)’ when he described himself as “fruitier than a grape” on an early track, but his song material contained enough evidence that there was no fucking with King Sun, generally speaking. He personally went after bootleggers and already in the ’80s felt the need to defend his interests with a gun when dealing with record company people. Rap folklore also has it he came to the aid of Ice Cube and his Lench Mob in an altercation with Above the Law at the 1990 New Music Seminar. On the artistic side, both his albums made statements in song form that hold up to this day, and especially his sophomore effort “Righteous But Ruthless” showcased an extraordinarily focused MC.

But while he didn’t have to wrestle with the creative aspects of his career, his dealings with the industry were a different story. His relationship with Profile Records was strained even before “XL” was finally put out. He eventually bought himself out of his contract and went independent, setting up Money Bag Records and releasing exactly one single in 1992 with previous collaborators The Hollywood Impact and Tony D. In an 1994 interview he voiced his discontent with being placed on the less illustrious posse track on Fat Joe’s debut and additionally claimed authorship for two songs on the album he wasn’t credited for. He submitted a track for the “Who’s the Man” soundtrack that didn’t make the cut and he witnessed Ice Cube use an idea he had shown him in good confidence for the “Predator” single “Wicked.”

In true MC fashion he met these challenges head on. In 1994 he advanced to the final in the New Music Seminar MC competition, and he managed to release an EP on prestigious Cold Chillin’ Records. Both feats came with a catch. He lost the battle to unknown Chicago representative Judgemental, and by that time the artists who had made his new label legendary had already jumped ship. It didn’t prevent the Jeweler from creating an in several ways surprising EP. Let’s take single and opener “Humm Deez Nuts,” quite an amazing record in a ’94 context (both single and EP weren’t actually out until early ’95). A virtual nobody, Connecticut-based producer Sudhama Ranganathan crafts an initially deceptively rigid beat with murky drums and a simple bassline that eventually starts to blossom with sparse but very effective organs. Sun’s voice sounds slightly different from before, now possessing a milky undertone, and he’s backed by an uncredited singer pouring out his soul about what you’re invited to do to the rapper’s testicles. Few times has rap delivered the proverbial fuck-you with as much galantry: “If it’s pleasure you’re seekin’, my man guess what? / It might please you to know that you can humm deez nuts.”

If it seems like he’s taunting the West Coast with the song title, know that he shouts out several L.A. representatives in the liner notes. But while his problem was with one person only, he still channels foremost West Coast nemesis Tim Dog on the album’s harshest cut, “Suck No Dick,” where the Bronx is presented as a stronghold of authenticity. Two general verses about the tricks of the rap trade pass before Mr. Jackson appears in the crosshairs:

“This is from your peoples on the East Coast
Ice Cube, you on the tube playin’ all high post
But when you was in some beef I was there to help
Then when I needed help – I had to help my damn self
This is for the record, yo, but off the books
I hit you with my demo and you crooked my hook
Yo, that’s ‘wicked’, I kicked it in pursuit Uptown
When the ‘Boyz n the Hood’ ‘Trespass’, we beat ’em down
Check your neck while I flex some New York slang
Niggas don’t really be ‘true to the game’
But what’s so hard about puttin’ me on?
Yo, ‘today was a good day’ for O’Shea, and not Sun Born
Now I know how you’re livin’, punk
On the East Coast you got beef in the Bronx
So when you come to New York, you best to roll thick
And don’t be tryina suck Zulu Nation dick
Yo, half the rappers in New York went soft
Sweatin’ niggas from Cali is how New York fell off
Get your best MC, I dust him off right quick
Cause real niggas in the Bronx don’t suck no dick”

The BX provides the specific setting for the cautionary “Street Corner” (essentially a quick-and-dirty POV version of “Big Shots”) and the chillingly orchestrated and narrated “Robbin’ of Da Hood,” describing a modern ghetto version of Robin of Loxley. Coincidentally (?) Ice Cube released a very similarly themed track called “Robbin’ Hood (Cause it Ain’t All Good)” in 1994, and since we’re on the topic of similar titles and themes, the EP’s closer “Get Down With Da Get Down” surely bares some resemblance to the Artifacts’ “C’mon Wit Da Git Down” in that regard. But Sha-Eaze’s jazz noir beat is certainly worthy of the comparison.

Sudhama Ranganathan (who called his venture Boiler Room Productions) deserves another mention, signing four of the seven tracks. Next to “Humm Deez Nuts” and “Robbin’ of Da Hood” he configures the bouncy “BNS Sex” (a dedication to the crew Sun was running with at the time, moreso than the expected sexcapade) and the similarly thumping but darker “Once Upon a Time,” a remarkable track for the fact that the rapper rather straightforwardly depicts himself as a failure. He does so only momentarily, at the beginning, before he’s on the road to success again, but that first verse has a sincerity to it rarely heard in rap before:

“At once upon a time I was down in the dumps
Wasn’t really makin’ loot, troops played me like a chump
Everybody else had cribs and cars
I used to be a star, but I wasn’t gettin’ far
I had a lotta girls, now I don’t have none
Even my Undercover Lover said, “Later, Sun”
Whatever happened to the fans that loved me so much?
I didn’t fall off, I know I didn’t lose my touch
My money got lower and my friends got lesser
My beeper wasn’t beepin’, so I kept it on the dresser
at home, what’s the use, I was dead on juice
But at one time I was kickin’ like Bruce
What goes up must come down
Jumpin’ on the 2 train and maintain Downtown
Brothers who ran to me now run from me
My wears was worn out, my kicks looked bummy
I couldn’t get a job, yo, they thought I was jokin’
Started losin’ weight and niggas said I was smokin’
Never that, but I was livin’ fat
Then again I had to tighten up a notch on my hat
Money was a problem, women was a problem
Family couldn’t help ’em, friends couldn’t solve ’em
I hit rock bottom, spent my last dime
Wasn’t doin’ jack once upon a time”

Unfortunately, Cold Chillin’ was finished shortly thereafter and Sun Dullah never regained his “Righteous But Ruthless” status. The “Strictly Ghetto” EP itself was a step away from rap inspired by Nation of the Gods and Earths philosophies and politics. Sun remained a thinker committed to common sense, but the EP length possibly prevented him from making more substantial statements. Musically, though, it’s on par with albums like Sadat X’s “Wild Cowboys” and Lord Finesse’s “The Awakening” and thus part of the last significant wave of rap records out of the Bronx in the mid-’90s. It furthermore features, and I’m disclosing personal preference here, one of the finest vocal performances in the history of rap, a veritable study of those nuances that separate the artform of rap from everyday talk. King Sun was a master of his craft, and it’s a shame “Strictly Ghetto” was more or less the end instead of a new beginning.