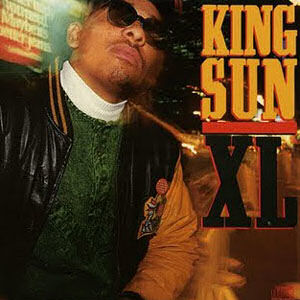 Believe it or not, before EXTRA EXTRA LARGE came to represent our grandiose modern times, EXTRA LARGE was sizeable enough to stand out. Rapper King Sun had the bodily frame to match, cutting an imposing figure at 6’7″, a height that lent some credence to the title of his 1989 debut album, “XL.” It contains his most famous tune, the Art of Noise-sampling “Hey Love,” released as a single back in 1987. On the sampling timeline, “Hey Love” (produced by Cutmaster DC and D-MoÃ«t) may very well hold a special place because of the seamless incorporation of a smooth sample at a time when the evolving technique mainly brought forth beats that were more on the rugged side.

The title and theme of the track also suggest that it served as an inspiration for L.L. Cool J’s “Hey Lover” (1995). This is noteworthy because Sun was obviously following L.L.’s own lead when he debuted with a love song. Once he began cutting an album, he was ready to demonstrate his abilities in other fields but still chose to end his first full-length with three relationship pieces, starting with “Hey Love,” followed by the quasi-sequel “Do I Love You,” where he gets to prove his love for the girl in question, and “Time to Go,” chronicling a relationship that was destined to fail.

While “Hey Love,” although completely okay for its time, can’t compare to “Hey Lover” (arguably one of the most convincing songs with a romantic theme in hip-hop history), the fact that the three songs portray relationships from different angles puts “XL,” at least in that specific regard, above your average ’80s rap album with the one prerequisite love joint. Things even get (just a little bit) steamy on “Coming Soon,” where he begins an affair with a mature woman. Although not coming across any less mature himself with his bass tone, Sun convincingly tells the tale of the young lad attracted to and at the same time intimidated by the experienced female.

But these tracks were probably not the reason “XL” was reissued in 2011. If there is one track that deserves to be crowned a classic in retrospect, it’s “Snakes.” Getting the most out of James Brown’s “Get up, Get Into it, Get Involved,” Sun Born lets loose a diatribe about serpents in human form:

“How many of you heard about snakes?
The kind that bite you if you’re not awake
Not the reptile, the cold-blooded, vile
walkin’, talkin’ with the human lifestyle
The kind that lie, cheat, and do wrong
cause destruction, and then they’re gone
Without any trace they vacate the place
Some look pretty with an innocent face
You never know the negativity they are in
You try to identify, and they shed skin
The most wrong-doin’, the truth-concealin’
The undetected, ever-so-appealin'”

He then goes into a shouted hook to amplify his alert before continuing with specific verses detailing backstabbing behavior, including incidents concerning alleged snitching and being told on when you cheat on your girl. Concluding with a more general verse (“Even in the White House, without a doubt / Find a snake and let’s cast them out”), Sun brings to a close a definite theme song that easily surpasses many a modern day rap track about snitches, haters and what have you.

Another gem is “Fat Tape,” quite possibly the first rap song to acknowledge mixtapes. It’s in the vein of another Cool J classic, “I Can’t Live Without My Radio,” with Sun bragging about the tapes he puts together, chasing after his favorite tape gone missing, etc. (He even seems to be selling them at a rather lucrative price: “It cost 5.99 for a fat tape.”) If anyone needed proof that rap and mixtapes go way back, “Fat Tape” provides it:

“Various beats that rock the street
King Sun who you anticipated to meet
My tape will soar to unlimited height
Contract of insurance in case you might bite
Put a tape in a box, start walkin’ around
No need to rewind or turn the tape down
Turn it up past 10 and have no fear
You are playin’ one of many fat jams to hear
In the winter or the summer, or any time
Nothin’ is recorded over none of my rhyme
Soundwave static, no interference
People applaud by the sight of my appearance
No top hat, tuxedo or cape
Just me on the m-i-c and a fat tape”

Mind you, this was long (at least by hip-hop standards) before ‘fat’ became one of those words that characterize rap slanguage. It was, however, the heyday of a little something called hip-house, an amalgamation of house tracks and rap rhymes. It produced a handful of good tunes but was generally met with scepticism. At the height of the hip-house fad, King Sun decided to come up with an alternative. “On the Club Tip,” prominently placed as the album’s opener, sees him explicitly dismiss house music and hip-house. Preceded by a Fairlight intro by Mike Mainieri, the track itself is of a sleek design, based on driving, gliding percussion that undergoes steady changes. Compared to Latin freestyle or hip-house, it’s a purposely masculine interpretation of club music. But while it should be contemplated by anybody remotely interested in where dance music and hip-hop overlap, it somehow doesn’t tap its full potential as a viable monster tune. It’s merely good when it could be great. (Slightly sharper engineering might have done the trick.) Still it’s part of The Hollywood Impact’s exclusive hip-hop discography, who would perfect his club hop formula with Twin Hype’s “Nothin’ Could Save Ya.” Twin Hype DJ King Shameek provides the cuts, while Hollywood returns with “Lethal Weapon,” a serious barrage of funk supporting Sun’s battle raps:

“Somebody wants you dead
You been walkin’ around with a price on your head
Your attitude is that you can’t be beat
I was paid the price and I wrote the receipt
What’s in store for you shouldn’t happen to a dog
Don’t even battle, just catch a cab to the morgue
There you will find a priest and a flame
On a tombstone today’s date and your name”

Production fetishists might also be attracted to “XL” for the contributions by the 45 King. “Fat Tape” is as cinematic as ’80s rap got, meaning it’s grainy instead of glossy, but the intent to create suspense is clear. Musically just a little bit on the pop edge, the single “It’s a Heat Up” is heavy on imagery in a different sense, and while the track as a whole isn’t too silly (but the video with the fire trucks might be), it’s a long way from Rakim’s allegorical verbiage on “Follow the Leader.”

Comparing his earliest tracks to the “XL” material makes it obvious that King Sun was one of those rappers adjusting his approach after Rakim’s emergence. But next to the gravity, there’s also the dry humor typical of ’80s rap (think Stetsasonic). There’s no denying that the definite King Sun album is “Righteous But Ruthless.” It shaped the sound, ideas and attitude of “XL” into a bulletproof whole. You can virtually trace Sun’s growth from the start when you ponder the “Hey Love” b-side, “Mythological Rapper” (included in the reissue), where he disses “mythological rappers.” While it’s unclear who he could have been referring to in ’87, the statement is quite paradox coming from a rapper calling himself King Sun. There are plenty of ‘mythological’ pointers on “XL” itself, from the album’s intro to the use of Nation of Gods and Earths terminology. And yet those references are merely part of the artist’s background, not of some agenda (as it became popular in the early ’90s). Between the “poet of love,” the “narrator of club” (“On the Club Tip”) and the Five Percenter King Sun, there’s still enough hardrock attitude for your average rap head here. “Lethal Weapon” and “All In” (“I got too much to do on the avenue / so I write my girl a rhyme and let her battle you”…) get down to business in true golden era fashion, “Snakes” and “Fat Tape” should long be part of the rap canon (quotables guaranteed!), and “Hey Love” is simply one of the blueprints for romantic rap.

Historically “XL” would have fared better if it was released shortly after it was recorded, which would have been somewhere between ’87 and ’88. King Sun got another chance with the sadly slept on “Righteous But Ruthless,” while his DJ and musical partner since their early days in Paterson, NJ, D-MoÃ«t, eventually achieved some success as a hip-hop and R&B producer (most high profile track: Nas’ “Hate Me Now”). “XL” may lack the grit and wit of its successor, but it’s a solid ’80s artefact from a serious rap artist.