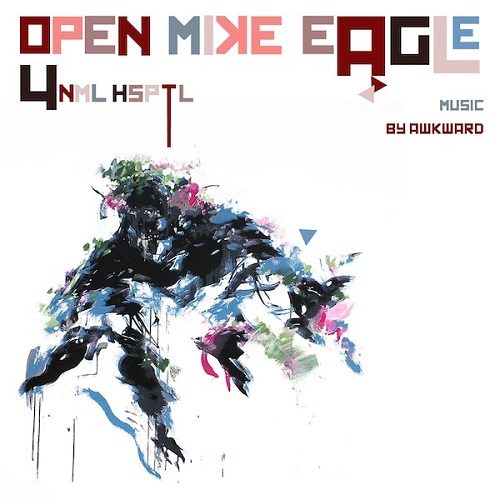 L.A. rapper Open Mike Eagle first came on the scene in 2007 as part of Thirsty Fish with Dumfounded and Psychosiz. He came up through L.A.’s Project Blowed, and was also part of the Swim Team. He released his first solo record, the excellent “Unapologetic Art Rap,” in 2010. On that album, he attempted to forge his own path in the hip-hop world with something he calls art rap. Art rap is a criticism of both the shallow, disposable mainstream hip-hop and ossified underground hip-hop that is so obsessed with the four elements that it can’t evolve past 1995. He released another album in 2011, and has put out several EPs. “4NML HSPTL” is his third solo record.

All of the production on the album is handled by Awkward. Even though he’s from the U.K. his beats fit in with the glitchy aesthetic of L.A.  producers like Shlohmo and Take. The beats are equal parts electro, IDM, and distorted electronica. It’s miles away from the sample-based boom-bap that the underground reveres and the pop sheen of mainstream rap. One of the most haunting tracks is “HSPTL.” Awkward lays down some lonely, mournful synths, and Mike raps about dealing with recovering from alcoholism.

“Black Clouds” sounds like a keyboard looped backwards. Megabusive and Finiki McGee join Mike on the mic, rapping “I’m vexed off a generational disconnect.” The beat manages to be both arty and banging at the same time. He teams up with Has-Lo on “Your Back Pack Past,” advising “If you’re afraid that they’ll discover your back pack past/Start trap rapping/Do a bunch of coke/Grow a handlebar/Do some more coke.”

Mike is currently touring, and doing some shows with Random AKA Mega Ran. That team up makes a lot of sense given that Mike and Random share a similar approach to rap. Both were teachers, both are college educated, and both take a highly intellectual and slightly nerdy approach to rap. Mike does not trade on bravado, swagger, or menace. He is all about being lyrical. He delivers his raps in a clearly enunciated flow similar to Homeboy Sandman. Every lyric is carefully placed and every word carefully said. Occasionally he comes off as stilted and perhaps too brainy for his own good. Mostly, though, he’s hammering the listener with a mix of clever lines and heartbreaking insights. On “Debts (Eagle Journal),” he raps about being broke and drowning in debt with a college degree:

He breaks down the financial crisis on “The Financial Crisis That Won’t Go Away,” describing how the Fed cut interest rates to support subprime lending, then backed up the banks when their speculation failed. It’s probably the first rap song ever to sample NPR’s Planet Money, and perhaps the only time when NPR/This American Life correspondent Adam Davidson will appear in a rap song.

Mike tries his hand at singing on several songs throughout the album, with mixed results. The pop “DanceBill” almost works, but ends up feeling corny and fluffy. His singing works better on “One Day,’ where his sung chorus transitions into melodic rapping on the verses. He’s at his best killing beats with another rapper. He teams up with Nocando on “Free-Writing Exercise,” and ends the album rapping alongside Danny Brown on “Cobra Commander.” The presence of other rappers on these tracks seems to get Mike out of his own head and forces him to bring some heat along with his verbal skills.

“4NML HSPTL” is yet another solid entry by overlooked art rapper Open Mike Eagle. He continues to pave a middle path between staunchly traditionalist back pack rap and mainstream rap. The result is an album that sounds unique, fresh, and yet is still banging. If you like your hip-hop smart, check out Open Mike Eagle.