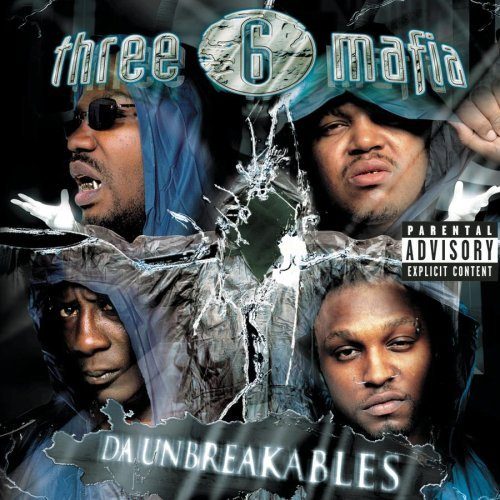 Appropriately enough, the group Three 6 Mafia is best known for three things: hard-ass trunk-rattling bass, songs that advocate getting crazy in clubs, and at least one song per album that crosses over. With their latest album “Da Unbreakables” that hit has already emerged – the bouncy and infectious “Ridin Spinners.” It’s not ground-breaking for rappers to brag about the rims on their cars, but “spinners” go that extra length to make onlokers gawk:

“My rims so shiny they clear like flat screen plasma
Gals faint when they see ’em, it’s hard to breathe like they got asthma
Oh them people trippin cause they think they seein thangs
My car’s sittin still, but my rims still rollin mayne
They off the chain”

Plain and simple, the forward momentum of the vehicle keeps a seperate track on the wheel of the rim moving even when the whip comes to a stop – hence a “spinner.” You could say it’s like making your shit moonwalk, but it doesn’t come cheap – 24 inch Ludacris SP’s will set you back $1700 EACH. Of course, when you move as many units as the authors of “Tear Da Club Up” and “Sippin’ on Some Syrup” do, you can afford it. Three 6 is not taking any chances with this album’s first and hottest single though – they brought in Lil’ Flip to make it EXTRA hot:

“Yeap! I got twenty inch spinners on my drop
Nothin but white and yellow rocks in my watch
I’m doin one-fifty so I’m watchin for the cops
Since I’m in the Lamborghini, I ain’t gon’ stop
I’m packin my glock, believe it or not, I’m ready to bust
And down here we drink purple (Man we drink that ‘Tuss)
So grab a cup Juice, so I can pour ir up
And if you represent yo’ hood, go an’ throw it up”

The guest verse is excellent, but hardly necessary. The low end keys and pulsating rhythm get in your head like a rotary drill, and the catchy chorus is interwoven with a silly but effective sample of the girl singing “He once was a thug from around the way” on Eazy-E’s first solo album (right before he told her to “shut the fuck up”). Don’t be surprised if you hear this song booming out of cars all summer long, with or without the spinners attached.

Unfortunately if there’s one other thing Three 6 Mafia is known for besides the aforementioned three items, it’s monotonous thuggery in their lyricism. No one really disputes if they’re as hard as they say, if they push as much weight as they brag, or if they smoke as much dope as they talk, but it’s hard to really care. In the pantheon of their Southern compatriots they don’t distinguish themselves like Devin the Dude does with humor, Eighball does with charm, or Scarface does with charisma and intelligence. What do Three 6 Mafia offer by comparison? If the weakly titled “Fuck That Shit” didn’t already tell you, these lyrics will:

“Security starin, they better not try it
Cause we will start a mother-fuckin a riot
The crowd is swayin, Three 6 playin
It’s on now no rules we obeyin
Security pissed, they startin to march
Just in time, I got out of Dodge
But I was spotted, and kicked out
Ran back in, shots rang out”

Once you listen to enough Three 6 songs you’ll recognize the same themes repeated over and over – don’t fuck with us, we the baddest click, we will fuck you up, we start fights in clubs, et cetera et cetera et cetera. All of the cleverness of “Ridin Spinners” is ultimately wasted by an album filled with futile nonsense that’s the very epitome of “talkin loud (and) sayin nothin.” Only the product of DJ Paul and Juicy J save it from mediocrity. The mixture of slow grooves and fast drums and guitars on “Testin My Gangsta” is sharp, “Money Didn’t Change Me” is an ominous mixture of piano and timpani, “Ghetto Chick” borrows from an Isley Brothers track that’s better than any of the rappers on it, “Let’s Start a Riot” is appropriately energetic, and even Akinyele wouldn’t be mad at “Put Cha Dick in Her Mouth” although feminists probably will be. Still there’s no denying the straight up stupidity of songs like “Shake Dat Jelly” and the fact that “Like a Pimp” is a unnamed remix from Juicy J’s solo album that offers nothing new here. Conspicuous by her absence is Gangsta Boo, whose female thuggery would have at least added some variety and a slight improvement to the verbiage. “Da Unbreakables” may be accurate in describing how tough they are physically, but it doesn’t excuse the fact that listening to this album long enough may make you test it’s fortitude against the nearest brick wall (just make sure you rip a copy of “Ridin Spinners” first).