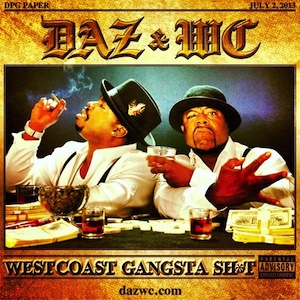 If DJ Quik and Kurupt’s “BlaQKout” brought together two different characters exploring – admittedly conceivable – common grounds, “Westcoast Gangsta Shit” adds up so nicely it will have fans of the subgenre the album is named after wondering, ‘Why didn’t this happen sooner?’ Daz and WC sport very similar forceful, resolute flows, which not only makes them seem like long-lost cousins but also guarantees that what you see is what you get with “Westcoast Gangsta Shit.”

This record is about its two leads and the life and music style they represent, nothing more, nothing less. “You fuckin’ with two legends, veterans, all that,” Dub declares on the opening title track, and they are not about to jeopardize their standing by exploring new terrain the way Quik and Kurupt did (at least to some degree). Instead they present themselves as patrons of traditional West Coast rap values:

“Peelin’ your dome, steadily clenchin’ the chrome
Cause niggas done forgot what this West Coast was built on
Gangsta shit, authentic originality
What you callin’ violence, bitch, is our reality
[…]
D-a-z and Dub-C make the gun go click-click
for all the niggas sick of this bitch shit”

They make sure the majority of the tracks have the bounce that has been a trademark of the later g funk era. Broadway and Touch Tone give “Westcoast Gangsta Shit” a light bounce by way of harp-like strings, The Arsonists do it with the help of pianos on “Stay Out the Way” as Snoop (no Lion) takes us back on the hook. Kuddie Fresh strings things out on “Don’t Call it a Come Bacc,” stretching both bass and synth lines. Meanwhile tune in to the rappers, and they haven’t changed their topic of conversation:

WC: “I took a second, stayed away from the scene
cause my dick is too big for them toddler jeans
I’m a grown-ass nigga in 501’s that swang
So quick to choke a Baby Boy out like Ving Rhames”

Daz: “We living legends in this gangsta rap, we Westcoastin’
Holdin’ it down for our culture and muthafuckin’ homies
The product of our environment and family tree
(Eazy-E) N.W.A (Ice Cube) Doc (Dre) Daz and D-a-z
I’m from the east side, Dub from the west side
That’s what you get when you let two of the best ride”

On “When the Shit Goes Down” they turn the tables and impose the burden of proof on those who “false represent.” After the contribution from Houston’s Beanz N Kornbread, they take the foot off the gas pedal with the Kj Conteh-produced, Eazy, Pac and Dre-sampling “Late Night.” David Gold & Dae One and an uncredited singer make “Blam Blam” a sonically pleasing affair, even so it would be wrong to assume that Daz n Dub are any less unapologetic. And “Don’t Get Wet,” laced by production legend Battlecat, is the archetypical West Coast rap song that combines the peaceful musical vibes of funk with aggressive lyrical content, resulting in what we call gangsta funk. The spartan “Roll & Smoke” by Broadway & TJofthewest leaves room for imagination as the duo serenades the ladies. Trippy Keez is responsible for the album’s only recognizable interpolation (Club Nouveau’s “Why You Treat Me So Bad”), but “Wha’chagondo” is as far from wallowing in heartbreak as the Luniz’ “I Got 5 on It” was.

The album finishes strongly with the wistful, worldly-wise “Time Will Preveal,” the metaphorical “Alcohol & Drugs” that revisits early ’90s templates set by the likes of Ice Cube and Spice 1, and finally two productions from Japan’s DJ 2 High (who happens to have released a series of mixtapes titled “Westcoast Gangsta Sh*t” in the last decade), “Dubbz n the Air” and “Moves I Make,” both equally engaging, last but not least thanks to Carlos McSwain’s drumming. Butch Cassidy has the distinction of being the album’s only vocal guest on the latter, while WC underlines the album’s theme on the former:

“Like my radio, I can’t live without it
From Eazy, ‘AmeriKKKa’s Most Wanted’ to ‘The Chronic’
I’m ’bout it, this West thang’s inside of a G
And even with a colonic can’t get this shit up out of me”

Comeback or not, later works in rap often sound lifeless and aimless. Not so “Westcoast Gangsta Shit.” Dillinger and the Baracuda simply do what they do best. It’s a basic formula banking on brand recognition and it’s far from breaking new ground, but it’s instilled with that vitality that made West Coast rap such a driving force in the 1990s.