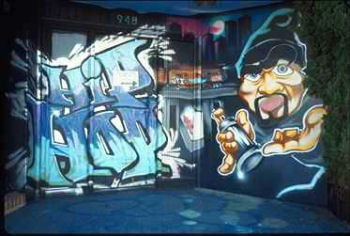 35 Realizations About Being 35 In Hip-Hop

Hi, I’m Adam, and I’m officially an old guy in hip-hop. It’s my 35th birthday today, which puts me at somewhere around a thousand in hip-hop years.

I’m not much of a list making guy, but I wanted to do something special to mark this occasion, and the something special I decided on was jotting down 35 realizations about being 35 in hip-hop. These are musings on everything from how we should be treating the next generation of fans, to dealing with all the changes we’ve seen, and experienced, over the years.

Although this list is numbered, it is in no particular order. I just wanted to make sure I actually had 35 items on the list. Incidentally, 35 is a lot! I have no idea how those BuzzFeed folks do it!

So without further delay, here are my 35 realizations about being 35 in hip-hop.

1) Hip-hop is a youth culture, and it no longer has to cater to us.

2) Just because we were the first, or second, generation who grew up in/on hip-hop, doesn’t mean we get to decide where it goes. The beauty of having grown up within the culture was the experience of having the culture take us somewhere, and shape us. It’s completely backwards to attempt to force the culture in any one particular direction.

3) The “Real Hip-Hop” soapbox is a terrible thing to stand on. Do you know how older fans sound trying to tell younger fans what “real hip-hop” is, and how today’s music is garbage? Just remember how we reacted when previous generations told us rap wasn’t music.

5) It’s OK to admit your favorite artists have had wack moments. I love Outkast, but I haven’t really liked anything they’ve done since Stankonia. This doesn’t mean I no longer think they’re fantastic. We can leave the whole undying fandom thing to the One Direction fan girls, and the like, because that’s exactly what someone sounds like when they refuse to admit any kind of imperfection in their favorite artist.

6) If your “Greatest Emcees of All-Time” list doesn’t include a few current names, you’re living in the past. Everything evolves, including emceeing.

7) There’s no need to question, or mock, new hip-hop fashions. We wore baggy carpenter jeans, and none of us knew how to build a house.

8) Not all your favorite albums are going to hold up the way you want them to. Sometimes a piece music is associated with a certain point in time, and if we’re not in that point in time it just doesn’t sound as good.

9) Seeing legends perform live is a crapshoot. Some are beautiful, gracious, amazing people. Some are bitter, demand adoration, and rhyme over their own vocals. Keep that in mind when seeing an all-time great.

10) There’s no need to accept music we don’t like.

11) Not as many artists will cater to us (that whole “youth culture” thing again), but when you find one that does it’s something worth talking, tweeting, posting, and blogging about. Keeping it to yourself only hurts the artist.

12) Be happy if your favorite independent artist blows up. He, or she, is making money off their craft. Isn’t that what you want for them?

13) There’s no such thing as a white emcee, Latin emcee, female emcee, Asian emcee, gay emcee, etc. There are good emcees, and wack emcees. That is all.

14) DJs use Serato now, and it’s OK. Your favorite DJ no longer has to pop two Advil every morning because he, or she, spent the night lugging around hundreds of pounds of records.

15) You shouldn’t be cool with excessive cursing, misogyny, and homophobic slurs in your music anymore.

16) If a television show has “hip-hop” in its name, it probably has nothing to do with hip-hop, and instead is attempting to use “hip-hop” as a synonym for “ignorance,” which is something we shouldn’t support.

17) There’s no singular story of hip-hop. No one has been at every event from day one. Allow other people to tell their stories, and take it all in.

18) When a legendary artist from the 80s, or 90s, attempts a comeback, temper your expectations. Aging happens.

19) Just because an artist is in a commercial doesn’t make them a sellout, it means they’re feeding their family. Being a musician is a very difficult way to make a living. We need to cut these men and women some slack. LL Cool J, and Common, did GAP ads. It’s OK.

20) Rapper beef is only fun if it’s lyrical. If they can’t say it in a rhyme, it’s just a waste of time.

21) Your album collection shouldn’t just be records that make you look cool, they should be records you enjoy, and if someone has a problem with any of them, who cares? It’s YOUR collection.

23) You will never convince anyone of anything on a hip-hop message board, or in the comments section of a video on YouTube.

24) Conflicting opinions about music are OK, just make sure to agree to disagree before it gets into an unnecessary shouting match. You shouldn’t damage a friendship over how you feel about Nas’ Stillmatic.

25) Emcees will excite you way less, but when an emcee DOES excite you, it’s still an incredible feeling, perhaps even better than before. You’ll want to call everyone you know to tell them about it, and you should.

26) Don’t waste your money on seeing big name artists in gigantic venues. The experience is rarely as good as seeing one of your lesser known favorites in a more intimate setting.

27) It’s OK to admit you haven’t heard of an artist, or aren’t familiar with someone’s work. Let whoever is excited about that particular artist tell you about them. You should have passed the know-it-all stage a long time ago.

28) Even though we may have a “heard it all before” mentality towards a lot of what’s being released, we still have to let the next generation hear it for the first time, even if it’s not being done by the people who originally brought it to life.

29) No, you shouldn’t do that new dance some 15 year old created and wrote a song about.

30) You should know by now that bottle service at nightclubs is the single biggest waste of money on the planet. Also, you’re 35, what the heck are you doing in a nightclub?

31) Just because a teenager is listening to music we consider wack doesn’t mean he, or she, won’t grow into loving better music. We all have a few albums in our collection that seem regrettable in retrospect, but without which we might not have been inspired to dive deeper into the culture.

32) It’s perfectly acceptable to leave an event early. If an act hasn’t gone on by midnight, you’re going to be more exhausted, than thrilled, when they finally hit the stage.

33) Focus on the artists you love, don’t even bother discussing the ones you dislike. Bashing an artist just takes time away from talking about the good ones.

34) Don’t get mad at your favorite artist for experimenting musically. They’re allowed to grow, too.

35) Never tell a young person their favorite artist is wack. At best, they’ll get into a fight with you about it. At worst, you will have discouraged them from pursuing hip-hop further. Sure, you want to help them out, but they won’t look to the person who just insulted them as a guide, they’ll just view you as an asshole.