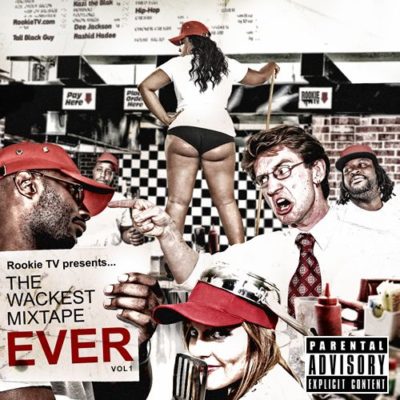 What Exactly IS a Mixtape These Days?

Warning – the following editorial will probably sound like sitting on the front stoop with your grandfather. “Back in my day, we didn’t have all these digital gizmos and portable music players. You know what we had? Records. Hard flat bulky records. And we didn’t have your fancy scritchy-scratch turntables either. We played records on boxes bigger than your head with giant tuba horns to amplify the sound!”

Okay – I’m not actually THAT old – but it’s fair to say I’m probably twice the age of at least half of the people reading the site. I never had my own bulky old Victrola to play records on, but I can actually remember one at my grandmother’s house when I was little. It had a toggle switch to play records at 33, 45 or 78 RPM, which to a young Flash may have been the funniest thing ever. I took immense joy out of taking my records and playing them back at the wrong speed to either hear the voices sound faster than The Chipmunks (Alvin, Simon and Theodore) or deeper than Darth Vader (James Earl Jones). My love for audio manipulation started early.

For the majority of my childhood and even a fairly sizable chunk of my teenage and young adult years though my life was about cassette tapes. There’s even a few weird years of overlap when I didn’t have a CD player but compact discs were becoming the industry standard where I would actually use a friend’s boombox to DUB COMPACT DISCS TO TAPE so I could listen to them in my WalkMan or my car’s tape deck. That probably seems asinine as hell – and it was – but I was so heavily invested in the tape format that I just wasn’t ready to switch. Even now I have hundreds of tapes in storage in my garage that I’ve never been able to get rid of – from cassette singles to Public Enemy albums to mixtapes by DJ Premier and Kid Capri.

Here’s where “Grandpa Flash” is going to get on his soapbox for a minute – the term “mixtape” as we know it and use it has lost almost all practical meaning. For a young hip-hop head mixtapes were not just a collection of songs recorded off the radio – though I certainly made my fair share of those. I called those “compilations” or “pause tapes.” To me a “mixtape” was a professionally prepared collection of the best current or upcoming rap music out there, usually crafted by a disc jockey who often as not doubled as a producer – to the point young Flash often got confused as to who on a mixtape was actually producing the music. Before the internet made it easy to swap songs online these mixtapes were an essential way to stay on rap’s cutting edge, especially if you lived somewhere without rap radio (or even basic cable).

Once I had access to studio quality equipment in college radio, I dabbled in making “mixtapes” of my own, though nothing I would ever consider the quality of Ron G or a Kid Capri. They were true to the name though – I would make a “master tape” and a “dub tape” and then distribute handmade copies for a nominal fee. Some of you who have known me for more than 20 years and still have a working tape deck might even have a Flash “mixtape” – but again I was never large or in charge like a deejay in New York or Los Angeles. The only thing I had going for me was that in college radio you get a lot of promo material from a lot of indie labels, so I had a seemingly unlimited set of material to work from, plus my own ever growing collection of records and discs.

I quietly retired from my small mixtape business as my college years wound down, seeing that the tape format was dying, and the cost of CD burning equipment was still (at that time) prohibitively expensive. It also didn’t feel right to me to call a compact disc a “mixtape,” but my feelings on the matter didn’t stop the deejays of the day from making the jump from analog to digital even though I didn’t join the bandwagon myself. Once you could call something that was no longer physically a cassette a “mixtape” though the game changed, and if you’ll forgive an old salt like me for saying so, I don’t think that it changed for the better. What made a mixtape a mixtape was that the DJ behind it was carefully selecting and blending together the best and the newest in rap to the point you would actually enjoy having to listen to it sequentially from start to finish. That may have been a technical limitation of the tape format but a good deejay could keep your ears locked in from end to end without using FF or RR.

These days you can’t even trip over your own shoelaces without falling on something that’s called a “mixtape.” It’s often just a single artist – it’s no longer the compendium of interesting up-and-coming emcees it used to be. It’s often said same rapper freestyling over other people’s beats, or using their own self-produced beats, or hooking up with their like-minded friends for either/both. This isn’t all bad – hip-hop collectives like Odd Future made their name off their grind making and giving away mixtapes of their work – but these days they’re not even in a hard format. At least a CD “mixtape” was something you could hold in your handle – but unless you put your downloads from Bandcamp and DatPiff and Live Mixtapes on a USB flash drive you’ve got nothing – and even then you’re just holding data. The data can be accessed in any order you choose – the whole experience of listening to a “tape” start to finish has been lost.

Nostalgia can be fun and “retro” can be chic but I’m far from advocating a return to bulky boombox stereo tape decks and cassette tapes. Cassettes had a ton of issues – they’d bunch up in your player and come out as a long pile of spaghetti, or they’d snap off and suck into the reel like a tortoise pulling its head inside a shell for safety. The audio quality wasn’t that great either. Compact discs have been a HUGE improvement in terms of portable durability and audio quality, and let’s not knock the MP3 and the iPod either – they’ve reduced entire libraries of albums to pocket size. I love the march of audio progress even if it means I’ve bought some of the same albums twice – but for God’s sake can we stop calling everything a “mixtape” now? It’s neither a “tape” nor a “mix” any more. It’s just a collection of songs in a digital format. Unless you actually hand me a cassette that I’m supposed to play end to end I don’t think it’s really a “mixtape” at all. I accept the term carried over from the days of my youth but linguistically and logically it just doesn’t fit.