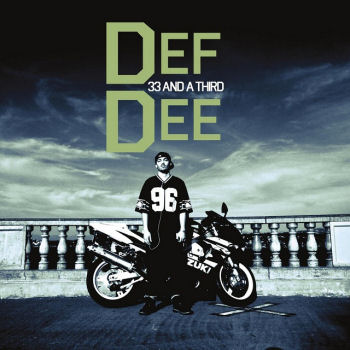 Babygrande, Duck Down and Rawkus were all record labels that went through a phase of releasing constant, quality music. They were names that were associated with quality, regardless of the artists involved. Of the last few years, Mello Music Group has definitely claimed the title of best record label in terms of quality to quantity. With producers such as Apollo Brown, Oddisee and Duke Westlake providing consistently great music, it’s no surprise that Def Dee’s “33 and a Third” is one of the most eagerly awaited albums of the year. There’s not been hype as such but given the fact Ugly Heroes and Trek Life have put out two of the strongest records of 2013, could Def Dee be another bullet in the chamber?

“33 and a Third” is billed as an album in thirds, even though it is actually split by three interludes. I’m no mathematician but 4 songs, interlude, 3 songs, interlude, 2 songs, interlude, 3 songs is closer to four sections than three. I’m not going to argue with Def Dee when he’s providing production this damn good though. The likes of “Numb Again”, “Drugs Outside Again” and the butter-smooth “Lonely Eyes” showcase Def Dee’s abilities, as well as his versatility. “Numb Again” in particular will satisfy the most hardened boom bap fiend just as much as “Lonely Eyes” will have any Cadillac-riding gang banger bouncing in their unnaturally, shiny contraptions. If Def Dee decides to do a video for “Coke nDa Canine”, it needs to be set in a billiards room with each rapper sipping on Scotch. Not just for my enjoyment, but because the track evokes a chilled out vibe despite the three verses from Kenn Starr, One Be Lo and Chev sounding disconnected from each other.

Some songs display the unbalanced product more than others â€“ “Fly By Night” and “All It Takes” are rugged, strong productions but could have had stronger vocalists. As much as I enjoy Mello Music Group’s discography, Def Dee’s release is let down by the occasional mis-step; Oddisee makes UK rapper Tranqill sound more out of place than his nationality suggests on “Still Propa”, while the sample on “Errybody Bent” just feels like the wrong sound for such a beat and as such, sticks out like a sore thumb. The record also (as a whole) does lack some substance and can veer in to “rapping about rapping” at times.

“33 and a Third” will leave you divided on whether it is anything more than extremely solid hip hop. It’s undeniable that Def Dee can kick it with his skilled label-mates but many songs feel incomplete and unfocused. Knowing that Def Dee did indeed throw some forgotten acapellas together atop his own sound, it’s slightly more forgivable but does lend the record a certain roughness. Much of the content is also devoid of anything tangible â€“ many songs are simply vague examples of rap. Given this is Def Dee’s first chance to impress, he has succeeded, but an album he crafts from scratch with rhymes written FOR his beats? That’s what we want next…