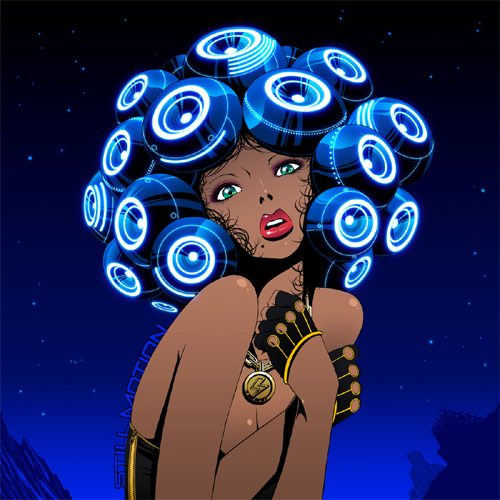 Since joining the “southernunderground” crew, Kentucky-based rapper Natti has become a more and more important cog in the CunninLynguist machine. By the time the trio released their 2011 record “Oneirology,” an album I consider among the best releases of the 2010s, it became fully apparent that Natti was the â€˜Lynguists’ best lyricist. About two and a half years later, Natti finally has released his solo debut, “Still Motion,” and it does not disappoint.

Upon receiving the news that Natti would be finally releasing his first solo record in 2013, my first reaction was: “I hope Kno does not produce the whole thing.” This may seem like an odd request because anyone who has listened to a CunninLynguists album will tell you Kno is among hip hop’s best producers. But anyone who has followed the group over the past seven or so years will also tell you, almost all of the positive recognition to their work is focused on the production, leaving their lyrical offerings underappreciated, if not totally forgotten about. My hope for “Still Motion” was for Natti to showcase his gruff, southern twang delivery and well-rounded lyricism, and perhaps gain some recognition for one of my favorite acts of the past ten years.

As far as production goes, I did get my wish; Kno only has three production credits on the album, and the rest of the duties go to the other CunninLynguists producer, Deacon the Villain. Deacon’s style is very similar to Kno’s, but at the same time it is more dedicated to a soulful blues sound, whereas Kno has recently added more spaced out, ambiance sound to his production (see: “Oneirology”). As one would expect, Kno’s three beats on “Still Motion” are obvious stand out cuts: “Another Galaxy” sounds like an OutKast song from the year 2025, “Just Like You” has a glossy-but-still-hard sound that nicely complements the gritty voices of Natti and frequent â€˜Lynguists collaborator, Freddie Gibbs, and “Filthy Hard” is a straight banger that more than lives up to the song’s title. On the other ten cuts, Deacon further establishes himself as a great beat maker with dope beats such as the guitar-driven, bouncy title track, the epic horn-laden “Bright Lights, Big City” and the bluesy guitar lick of “Late Night Cruise.” Despite Kno having only three beats, the production may very well be the highlight of “Still Motion,” which isn’t to say Natti isn’t sharp with the raps.

From the get go, Natti raps on “Still Motion” like he has something to prove:

“Allow me to introduce myself
Roll up a blunt and induce myself
Crumbling herb over top of the words written I’m sitting in dro smoke
Trying to lose myself
Trapped in a life grasping a mic that’s been right for a felon on the loose
Instead of cops flashing a light I’m catching a flight
Blowing my pipes out just leaking out the truth
See what Reefa do
Natti bout as country as a mullet in a UK blue Trans-am
Blowing out fruit in the passenger side of the coup of a pretty bitch
That you can’t stand
Two can Sam
Blowers in both doors I chose Pepsi in the midst of the coke wars
Make dope boys wonder what is he dope for?
What music has hoped for so we don’t wait no more we still in motion”

Natti goes bar-for-bar with Freddie Gibbs on “Just Like You,” and while Sheisty Khrist’s stand out, aggressive flow shines on the posse cut, “G.O.R. (Gods of Rap),” Natti again proves he’s in an entirely different league from the other emcees on the track. On the Sha Stimuli and Substantial assisted single, “Architecture,” Natti displays his fantastic word play, which is one of his most underappreciated talents (for further examples, see CunninLynguists’ 2007 single “Yellow Lines”). On “Still Motion’s” closing and most moving song, “Underground Railroad,” Natti painfully depicts the life of a modern day, struggling rap artist:

“Underground Railroad” perfectly much sums up the frustration of what it’s like being a criminally slept on rap artist. I’ve always compared being a CunninLynguists fan to Shallow Hal. In the movie, Jack Black’s character, Hal, he’s in love with a beautiful woman (Gwyneth Paltrow), but no one can see her beauty except Jack Black. I’ve time and time again, tried to put people onto CunninLynguists, and for some reason or another, they never seem to catch on with fans. As frustrating as it is for a fan, I can only imagine the anguish Kno, Natti and Deacon feel when they release another stellar project that falls onto deaf ears (obviously not including their extremely loyal, albeit small, fanbase). With Natti’s solo debut, I finally got my wish of him putting on a lyrical clinic over amazing production. But I still feel a little underwhelmed by the lack of reception for yet another excellent CunninLynguists-related release.