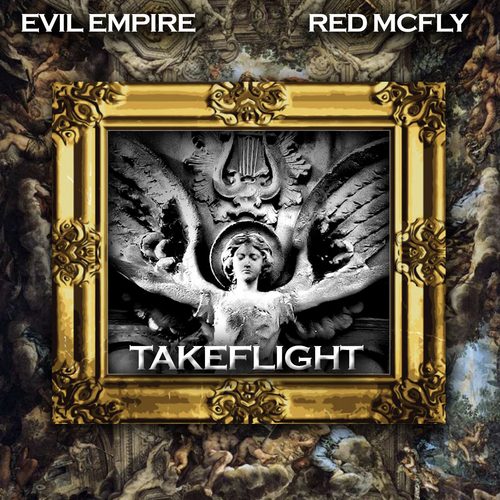 I was new at this. But I was serious about it, doing what I felt I had to do, telling the aspiring rap duo how far they were from making good, enjoyable music. He was new at this. But he was serious about it, or else he wouldn’t have went to the trouble of writing music, recording it, packaging it and sending it to media outlets such as RapReviews.com.

And so we meet again, in another time. The artist who today goes by the name Red Mcfly has already had his music examined by this reviewer, and he’s made no small progress since then and made it a point to inform me about it. To be honest, when Red got at me recently I didn’t remember the EP in question, but my review of it that I found in our archives was just as forgettable and if I’m not disclosing it at this point it’s also because I’m embarrassed by the cocksure, judgemental manner in which I dismissed artists seeking a professional opinion.

That’s all water under the bridge now, and if you, the reader, can take anything from this little episode, it’s that you should not let some sideline commentator discourage you from pursuing your goals. Because these days Red Mcfly’s production talents are requested by the likes of French Montana, Chinx Drugz, Max B and GLC. With “Takeflight” the Pennsylvania representative expands his resume with a solo mixtape that bears some resemblance to other mixtapes out there but still offers a sincere look at its author.

Flying has been the metaphor of choice of up-and-coming (and subsequently top-ranking) rappers for some time now (B.o.B, Wiz Khalifa, Curren$y – to name just the most prominent), so the branding isn’t terribly original. But before Red welcomes the listener aboard (“Welcome 2 the Flight”), he chooses to open the project with “Falling,” which samples British band Florence + the Machine to great effect. Despite the harsh transition from the fragile female singing to the trappish beat, Red achieves an almost gospel effect when he extends the Florence vocals into his verses. It’s certainly an attention-grabbing opener, and Red matches the sensation by reflecting on his life in a measured flow.

Mcfly’s approach to rapping isn’t technical, actually it’s par for the course for his style of rap, rap where emotions are always involved, whether the expressed sentiments are satisfaction, frustration, or self-motivation, etc. and where even nonchalance and arrogance come with an emotional undertone. But his performance also reaches back further into rap tradition when he vows to put his “soul on this paper with this pen.” Elsewhere he quips, “Fuck these rappers / All they talk about is how they fuckin’ trappers,” keeping the usual suspects you may initially want to lump him with at a distance.

Early on he lets us in on his struggles as an artist, as he mentions inner demons amd past demons, drugs and crime. To a nocturnal, slow synth beat, he shares his – not exclusively happy – thoughts on “Welcome 2 the Flight”:

“Sometimes I let the drugs take over my brain
cause if I was sober I don’t think I’d be sane
So many thoughts killin’ me, too hard to explain
This that feeling when Django first Unchained
My whole life fightin’ [for] legendary status
A legend told me it ain’t as sweet when you finally have it
Already sacrificed everything, might as well have it
I got the world on my back, I’m feelin’ like Atlas
Which bring me where I’m at, behind this Benz wheel
Like my Pyrex shorts, nigga, I Been Trill
On that same bullshit that got my friend killed
But instead of killin’ with guns I kill with pen skills”

He continues the winning streak with “Dreams.” Accompanied by an intimate yet intense rendition of Mr Hudson’s “There Will Be Tears,” he tells a tale many of his peers can relate to:

“I remember watchin’ MTV Jams and thinkin’
Why the fuck they on TV and I’m here thinkin’
On my couch smokin’ weed and every day drinkin’
And right there reality’d just sink in
Somethin’ told me: ‘Damn Red, you’s a fuckin’ loser
How many times you wanna sit in a police cruiser?
Talkin’ ’bout you wanna be a artist and producer’
At the rate I was goin’, had no future
So like Martin Luther King, man, I had a dream
Tired of doin’ drug sales and credit card schemes
Tired of lookin’ and only find lint in my jeans
Seein’ niggas that I know on my TV screen
And I’m hotter than them niggas with the beats and rhymes
Baby moms said: ‘Bro, we can’t eat your rhymes’
And I couldn’t say shit, cause I know it’s true
So I’ma prove to everybody that my time is due”

After taking flight in phenomenal fashion, Red finds himself tempted to switch to autopilot. Rather than realizing artistic visions, he seems intent to meet expectations. He does meet them unquestionably, checking all boxes on the checklist from ‘ominous’ and ‘fateful’ to ‘throwed’ and ‘wavy’. He turns the swag up on “By Any Means,” riding the dark soaring and plodding beat with the confident street style that continues to be one of rap’s main assets: “Donatella Versace designed my eyewear / A BirdsEyeView describes what I wear / In one word, so Takeflight, this Mcfly year / So not a motherfuckin’ thing is what I fear.” He also looks to outside producers to provide him with tracks fit for the times, within that span between hype and hypnotic. There’s the gothic/angelic “On My Mind” by Gmoney Baby, the modern day romance “Someone to Notice” by Ages Beats, or the female vocals-sampling “Destined” by MEZ. “FYN” and “Mind Right” position him as a cleaner cut SpaceGhostPurrp, certainly not the only tracks to rely on spooky effects.

Especially in comparison to the opening trio of songs, the finale leaves something to be desired. “Can’t Sleep” is the type of ethereal production that begs for a higher-caliber performer. “Taking Flight” is a southern production already past its due date and “Just Breathe” may offer a breath of fresh air with its sun-lit tapestry but Red clouds his vision of a better world with a slip of misguided homophobia.

Hip-Hop production is a career with uncertain prospects. Red Mcfly is well advised to look, as he does with “Takeflight,” for other avenues that may lead him to, who knows, mainstream success, or any other solidified status that may await down the road. The Coke Boys affiliate’s musical and visual talents should enable him to maintain his independence and do what’s best for him. If he strengthens his weak points (drums, flow) and pursues good ideas like the short epilogues he sometimes adds to tracks (like the Roosevelt speech in “Falling”), for Red Mcfly the only way is up.