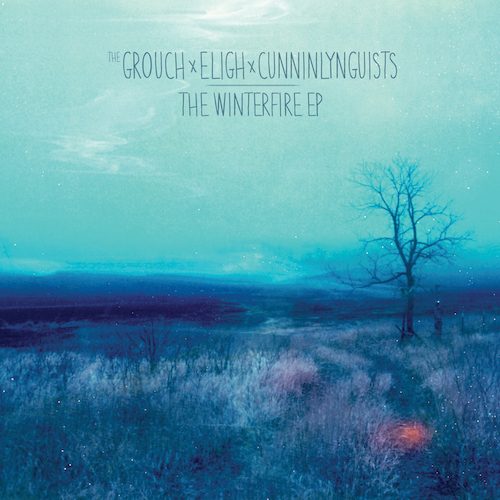 “Your hair is winter fire…”

The 1990 TV miniseries based on “Stephen King’s IT” is where I recall hearing the words “winter” and “fire” used in the same sentence with such regularity. The line was written by one of the child characters as part of a love poem, a love that went unrequited well into adulthood. When west coast rappers Eligh and the Grouch teamed up with the southern rap trio CunninLynguists, the stable took to combining those two words to play on their relations and opposing dynamics. The end result was “The WinterFire EP”. Released during their 2014 “How the Grouch Stole Christmas Tour”, the 7-track concept EP loosely focuses on the connotations of the coldest season.

Produced entirely by Kno, he employs the usual hallmarks of his productions: Sampling ’70s prog-rock and utilizing haunting vocals for some well-placed evocative effects. The EP’s intro begins with a cabin door being opened in the dead of winter with winds blowing and a match being struck (the EP is book-ended in extinguishment). Wistful, lonely, and as frozen as the cover’s barren winter wasteland, the one emcee who captures those themes beautifully is Deacon the Villain. His verse on “Only the Past” is the apex of this. The lead track is “Fire In Her Eyes”, with its contagious vocal sample in the hook. Deacon begins with his customary wordplay, with Eligh’s quick-paced lyrical flow sandwiched in between him and the Grouch’s deep cadence delivery:

“100 Years” starts with a vocal sample, and its musical backdrop is the darkest of the albums production with its murky sampled instruments. Kno himself even assumes mic duties on this one with some abstract political commentary. “Gas Station Attendant” reminds me of one of the beats Kno did a year prior on Natti’s 2013 solo album, “Still Motion”, which may be why Natti had the best verse. It’s bass-driven and Deacon himself sings the hook. The strongest track, however, is “Too Many Winters”, which best captures the feeling of desolation that comes with those long cold winters:

“The WinterFire EP” is short, but it doesn’t need to be any longer for listener consumption. On the rapping aspect, the underground styles of the south and the west coast meshed well on this EP. I honestly thought Kno was done for the rest of 2014 after producing the majority of CunninLynguists’ “Strange Journey, Vol. 3” earlier in the year. But I’m glad he wasn’t because his beats and the emcees rhyming over them made this short EP a welcome dessert.