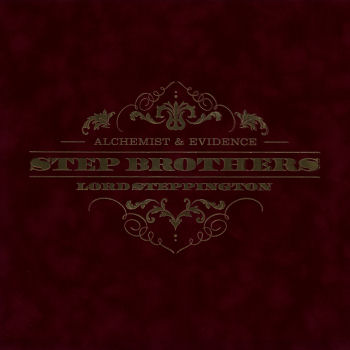 Evidence has gone from strength to strength since breaking out of Dilated Peoples with his solo albums getting steadily more and more polished. Dilated have always had that clean, thumping production that earned them mainstream success in the early 2000s, and Evidence has maintained this momentum with slow flows over self-produced speaker splitting backdrops. He’s an excellent producer, but Alchemist is clearly an influence. Evidence featured Alchemist on his “The Layover EP” record some five years ago, and they were billed as Stepbrothers on a song called “So Fresh”. The two have admitted that they got their name from the brilliantly juvenile Will Ferrell film and this long awaited collaborative album is equally entertaining, and at times as utterly ludicrous as anything Will Ferrell has done.

It’s hard to picture Evidence and Alchemist trying to bury one another in a parent’s garden, but if they were to build bunk beds in order to ‘make room for activities’, it looks like Evidence got caught short lying on the bottom bunk, as Alchemist goes on to produce 13 of the 14 tracks. The Dilated Person even sounds more winded than usual throughout “Lord Steppington”, an album that lacks the natural chemistry of duos such as Red and Meth, Mobb Deep and even Dilated Peoples themselves. That’s not to say this isn’t a great listen; production is largely on point (as you’d expect) and both artists are more than capable of providing interesting performances. Many have expressed how Evidence ‘kills this’ album, but it’s Alchemist who walks away with his head held higher. You’d never have him down as a rhyme animal but there are songs here that will have you questioning how this long-established beatmaker holds his own against emcees of the calibre of Mad Skillz, Styles P, Rakaa, Blu, Action Bronson and Roc Marciano.

Giving Evidence ONE track on “Lord Steppington” means that this record feels undeniably Alchemist – as similar as both guys’ production sounds, they DO have unique characterstics to their styles. Evidence tends to have bouncier, cleaner samples that are often accessible, whilst Alchemist (particularly since working with Oh No) is more direct with simple rhythms (“Step Masters”) and possesses a greater element of risk when throwing samples together (“Banging Sound”). The latter sounds like a Street Fighter sound effect is used, but despite each emcee delivering the goods (including the under-appreciated Fashawn) the ‘Power!’ chant that has been looped is incredibly off-putting and unfortunately too difficult to ignore. The sole Evidence production underwhelms (“Byron G”), largely because it doesn’t even sound like the same guy who laced the monstrously cool “After the Fact” album by LMNO from a few months ago.

Where Alchemist has excelled in his more recent work is the depth that comes with productions like “Tomorrow”. Initially it is a blasÃ© track that is undeniably infectious with its vocal snippet crying ‘yesterdayâ€¦’, but upon repeated listens it seems to unravel bit by bit, particularly as you digest the messages from guests Rakaa and Blu . Substance is certainly present throughout “Lord Steppington”, but it’s often hidden away not only because of the abstract approach from Ev and ALC, but the fact that Evidence’s verses seem to be less prominent than they were on his “Cats & Dogs” album. Maybe it is the way it has been mixed, but Evidence sounds a bit squeakier than usual. When there are beats like “More Wins” though, it’s easy to overlook such quibbles. It’s hard to ignore Action Bronson’s cringe worthy self on “Mums in the Garage” however, an insane collaboration that implies there are numerous mothers in a garage, but the way the British vocal sample states “Mum’s in the garage!” it becomes apparent there is just the one parent rooting around for some much talked about ‘loot’.

Given the song sees Bronson and the Step Brothers share vivid verses that veer between Evidence’s tale of a fugitive, Alchemist’s wild statements (“I’ll karate chop your nipple”, “I’m high enough to communicate with dolphins”) and Bronson’s awkwardness (“I saw the pussy and it’s so hairy”) – it somehow works. It’s all very raucous and the comic book stylings of the instrumental complement the rhymes nicely. It is one of a few songs that follow the flamboyant lifestyle a Lord Steppington would presumably live. Wild exuberance continues to be displayed on “See the Rich Man Play” – a hypnotising, almost wistful collaboration with Roc Marciano that sees Alchemist up his game. Evidence sounds more blazed than usual, but it is Marciano that goes in the hardest (unsurprising given his experience of eloquently sharing his elitist ways). There are some classic pieces of Alchemist production through the middle of the album that I just know I’ll play in a few years’ time, “No Hesitation” being a prime example. It packs in a beautiful string sample that’s used sparingly, so as to tease the listener and brings back memories of refined head-nodders like “Worst Comes To Worst” and “E=MC squared”. Combined with plodding bass, glimpses of violins and a lyrical appearance from Styles P, it stands out despite being among good company.

It’s fair to say that the “Lord Steppington” character of the album’s title is not so much a person, but an ideology. This album sounds upper class, polished and refined in a strangely gritty manner – a bit like taking a Ferrari around a dirt track. It looks and sounds beautiful, is often ridiculous and there are moments where you’ll think “this isn’t quite right”. Despite some songs feeling like the listener is a fly on the wall in an Evidence and Alchemist session, it’s hard to deny that it’s consistently entertaining. So where does this fit in between all the Gangrene, Evidence, Dilated Peoples and Alchemist albums? If you enjoyed the Gangrene albums, then there’s no doubt this will entertain as it fits in snugly with the grimy, often quirky backdrops ALC usually knocks out alongside Oh No. It’s not as easily digested as a Dilated Peoples or Evidence record, with some tracks being a bit too quirky to really match the previously mentioned highlights (“Legendary Mesh” being a prime example) and the off-beat delivery from Alchemist isn’t as naturally pleasant as Evidence’s is. Nevertheless, these are facets of having heard so much work from both artists that unless they both come with their A-game, I was always going to feel a bit disappointed. This isn’t their greatest album, but there’s plenty to enjoy from Evidence, Alchemist, the carefully chosen guests and the mostly excellent instrumentals – Steppington isn’t a fully realised character but a thin theme binding together a very good collection of eccentric hip hop.