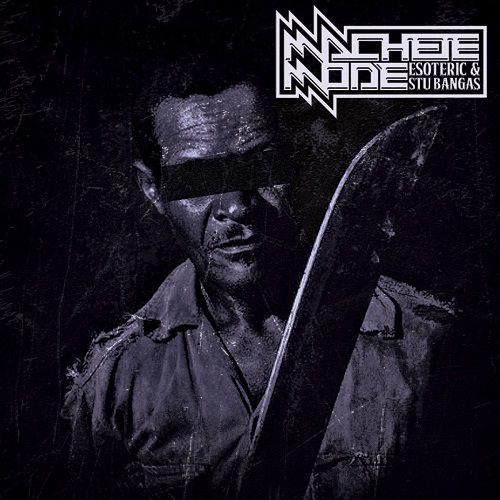 Babygrande Records operated a forum about five years ago (they seem to have removed it now) that was full of fans of underground hip hop. That would make sense given the type of music that Babygrande were putting out from the likes of Jedi Mind Tricks, Brand Nubian and Army of the Pharaohs. What perturbed me was the large portion of the forum that seemed to hate Esoteric – more specifically the fact that he sounded like Kermit the Frog. I suppose if you listen to a lot of his work, there are moments where his verses aren’t the clearest and he could well pass for Kermit, but there’s no denying that Seamus Ryan is an unbelievable emcee.

The term rapper’s rapper has never been more appropriate: Esoteric knows how to flow, rarely drops a corny punchline and is always open to challenging himself. His work with producer and DJ 7L has largely been excellent; Dangerous Connection being the pick of the bunch; but Esoteric then started dabbling with production himself but never quite outdid his Boston compatriot. “1212” and this year’s “Czarface” project are healthy reminders of 7L and Esoteric’s chemistry, and considering their lengthy careers, they never really get mentioned among some of the best hip hop duos. Esoteric may lean heavily towards generic battle rap, but it hasn’t hurt his chances at being featured in the Top 10 Best Hip Hop Albums of the Year list on RapReviews. Hell, this is his THIRD project from 2013, having contributed to the Demigodz’ “Killmatic” album and the previously mentioned “Czarface” project with 7L and Inspectah Deck.

Esoteric is certainly no Muppet on the mic, and is an emcee that has always tested himself lyrically. Admittedly, his content is 90% brag-rap and battle rhymes, but he has always evoked a light-hearted approach to his albums, with albums like “Dangerous Connection” and “Saving Seamus Ryan” often showcasing an inventive side that Esoteric’s guest appearances for both The Demigodz and Army of the Pharaohs rarely reveal. “Word Association”, “Rest In Peace”, “Terrorist’s Cell” and “Stalker” are all fantastic examples of Esoteric combining his natural rapping technique with interesting topics, the problem is that they are all off of 2002’s “Dangerous Connection”. 2004’s “DC2: Bars of Death” leaned more towards graphic violence, which was actually one of the song names on the record, and 2006’s “A New Dope” was an experiment that few felt worked. Esoteric dabbled with some solo projects until 2010’s return to form; “1212” that emphasised the boom bap styling they first caught acclaim with.

Considering this is his third project of 2013, Esoteric has had a very solid year considering both The Demigodz’ and Czarface records were well-received despite being unashamedly throwback. Unfortunately, this collaboration with underground heavyweight producer Stu Bangas fails to reach the levels of the other two albums, largely because it adopts the ‘modern boom bap’ sound that the Army of the Pharaohs, Vinnie Paz and all of their affiliates utilise for their ultra-hardcore releases. Songs like the Madchild-assisted “Bounty Hunters” and Ill Bill-laced “Repercussions” are tiresome reminders why Stu Bangas’ creepy production wasn’t part of the Demigodz album. Despite “The Danger” seeing Esoteric and Apathy show how lyrically adept they are, the unimaginative Vinnie Paz hook and corny Celph Titled verse let the side down. Esoteric takes his battle raps even more seriously on “Ease Up” – a conceptual song featuring Planetary (of Outerspace), Blacastan and Reef the Lost Cauze that while vaguely interesting as a theme, won’t have any battle rappers quaking in their boots.

Esoteric has always thrown in references to his love of wrestling, whether it be Dusty Rhodes samples on “DC2: Bars of Death” or actually teaming up with the face of the WWE himself – John Cena, on songs like “Beantown”. According to Wikipedia, Esoteric even ghost-wrote for John Cena, and this album’s wrestling moment comes ironically on “Steel Chairs”, something that’s been slowly weaned out of WWE (along with blood). “Steel Chairs” isn’t a great song, musically or lyrically, but if you ever enjoyed professional wrestling in the 80s and 90s, it’s a great reminder of how, just like hip hop, wrestling isn’t the dominant force it once was (with Esoteric naming many legends).

Having slated some of the production on here, there are some gems that treat your ears better. The Alchemist could easily be mistaken for lacing “Apprentice to Master (Study)”, a legitimate banger graced by the underworked Blacastan (he needs a new album pronto!). “Never Be” shows Esoteric’s human side, mocking social network users’ on top of a plodding production reminiscent of 2002’s “Watch Me”, while Stu Bangas samples what sounds like the classic Sega game Golden Axe on “Blood On The Flowers” to superb effect.

So where does “Machete Mode” stand in Esoteric’s surprisingly vast discography? It’s not as good as his other 2013 project, “Czarface”, which saw Eso come full circle on his career after bursting on to the scene with Inspectah Deck (on his “Speaking Real Words EP” fifteen years ago). There’s nothing wrong with Esoteric’s performance here (or on most of his projects) but Stu Bangas’ style of morbid, intimidating production does grate after a while. When it’s done with verve (such as the fantastic bonus cut “Pharaoh Status”) it can sound incredible – especially when Esoteric gets in the zone and flows in and out of the beat – but too often the album veers dangerously in to a bland, AOTP offshoot that will only cater to a niche audience. That’s not to say that this album is weak, or even mediocre – but when your standard is so high it does mean that any sign of slightly inferior production will knock this record’s score down a notch. Despite this, three strong projects in one year is almost unheard of and most certainly would have silenced those Babygrande ‘muppets’ that hated on him.